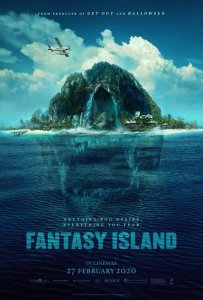 I wasn’t expecting to become a defender of Blumhouse’s much-reviled remake of 1970s TV staple, Fantasy Island (it currently has a 7% fresh rating on Rotten Tomatoes) but this year has been defined by surprises. I’m not going to say that this is a good movie but turning a cheesy TV drama into a horror thriller that might as well take place on the magical island from Lost, I have to admit that’s a daring approach and it almost works. Michael Pena is miscast as a villainous Mr. Roarke who invites a group of strangers to a beatific island resort to have their fantasies come true be they hedonistic (wild parties with sexy guys and gals) or vengeance (Lucy Hale getting even against a high school bully) or regret (Maggie Q saying yes to a proposal and starting a new life). At first the fantasies seem too good to be true and then the darker reality comes forward, forcing many characters on the run. I was very happy that the filmmakers, the same creative team behind the equally-reviled Truth or Dare, present the proceedings as being clearly supernatural and stick with it. I was expecting some hackneyed explanation of how it was all a show, or a simulation, or some kind of televised event for the rich to gamble upon, but the movie stays supernatural to the end as if it is the Lost island with its weird secrets. Because of that scenario, even when the rules of the island and the final scheme comes to light as to whose fantasy all of this pertains to, it’s a forgivable level of convolution. There were moments I even had fun, mostly just seeing how crazy and far away from the source material everything can get. It felt like if someone was ordered to remake The Love Boat and came up with Ghost Ship. It’s just fun how different it can go. I didn’t care for any of the characters outside of Maggie Q, who gets the best acting showcase as a woman with many regrets who is trying to ignore her misgivings. Hale seems to be playing a character ported from the Spring Breakers universe (what a dreadful thought). Michael Rooker (Guardians of the Galaxy) appears as a grizzled veteran of the island. Even when things aren’t working, like black-eyed zombies or much of the comedy, I wasn’t ever bored. How crazy would things get next? How would they tie this all together? Fantasy Island is not the horrible experience critics claimed earlier this year. It’s not a great movie but it works as silly escapism, and during a time of pandemic-initiated quarantine, a little silly escapism might just be what you need for a couple of hours.