Imagine waking up one day and having real-working handguns bolted into your hands. That’s the wild premise to Guns Akimbo (akimbo means, in this context, “flung out haphazardly”), a frenetic action comedy that never takes itself too seriously. Miles (Daniel Radcliffe) is a computer programmer who takes it upon himself to harass online trolls. One of these trolls, the proprietor behind the death match game show Schism, takes it personally. He drugs Miles and has his cartoonish goons give him the gun-hands. He’s the latest contestant on Schism, and the top-ranked assassin Nix (Samara Weaving) has been selected as his competition. Miles has to fend for his life, while not arousing panic or the police, and he can’t even open a door.

It’s a bonkers, proudly juvenile action comedy that starts off at a breakneck speed and rarely lets up, and there’s a good reason for that – Guns Akimbo is a lot of flash and little else. It’s a movie that’s constantly in your face with its stylistic tricks, crass humor, wanton violence, and bizarre touches, and for a decent portion of the movie it kept me entertained. The rush of colors, movement, and profane insanity can be enjoyed on a certain level that doesn’t require much in the way of thinking. If you need a turn-off-your-brain action comedy, Guns Akimbo can work on that level, but if you think a little more the illusion begins to dissolve. I start to question the reality of this world, which seems more akin to something from The Purge but lacks the satirical through line of the Purge franchise. The satire of Guns Akimbo feels tacked on and often forced, much like the setup of its premise. There’s really nothing about firearms or gun culture covered, which seems bizarre considering the premise. The “troll culture” aspect of the movie is barely covered, setting it up as a straw-man argument to lambaste the general indifference to human suffering. We never really return to it except for brief moments to score easy points. Miles is a troll to trolls, and they get so incensed that they go to extreme lengths for vengeance from… being trolled? Is this to imply how fragile online trolls are as people? The world of the movie seems to acknowledge its Running Man-style online death game shows but the rest of the world goes on normally without commenting. It feels like someone just dropped in a fantastic element into the normal world and nobody acknowledges it as such. I thought maybe at the end it would turn on the Schism viewers but no. They’re basically like those five or six audience faces we jump around for reaction shots, like in The Truman Show. The satire of the movie feels more like a superficial finish.

From the first sequence of stylized violence on, I made a note of how overly edited the action was. It wasn’t quite to the hyper-edits of Michal Bay’s kaleidoscopic realm but it was noticeable and made it harder for the action to be understood and appreciated. You get the premise of the scenarios, two cars chasing after one another and firing, but it’s presented in such a blizzard of images, sounds, and colors that it’s more the impression of the scene rather than a development. This impression was always present when we watch Nix storm through a drug den and lay waste to every armed goon inside. Here is a scenario where all I want is some stylized violence and fun fight choreography, but what I got was more of the same incomprehensible jumble. Nix shoots. Bullets hit skulls. Blood splatters. The camera is constantly zooming, or careening, or flipping upside down, and after a while I just gave up and accepted it’s all only impression-based. It’s about the immediate energy and not what’s actually happening onscreen. I wasn’t going to get any interesting fight choreography. I wasn’t going to get any memorable bits of crazy action. It was like a junkier version of Wanted, with a super-powered player running through a level and clearing over-matched opponents. Without more, the same action can get boring. The same happens in a junkyard clash between gangs. The only action sequence with a satisfying development was a car chase where Nix attacks with the spinning wheel of her motorcycle. Guns Akimbo has decided to overwhelm your senses to distract from its action restrictions.

As a crazy comedy, Guns Akimbo is more successful and fun. I found the physical comedy to be a consistent and enjoyable source of entertainment. While the action might get boring, watching Miles simply deal with the logistics of his gun-bolted hands made me laugh and cringe constantly. How does one go to the bathroom with gun-hands? Put on their pants? Open a door? Drive a car? It’s a dose of slapstick that doesn’t have to dip into edgy material in order to make its mark. Radcliffe is genuinely fun to watch during these sequences, as it plays to his strengths of melding awkward clumsiness and nervous high-strung energy. Thankfully Radcliffe is set for life thanks to the Harry Potter movies because he has consistently chosen really weird and interesting film roles, almost to the point where his presence in a (non-studio) movie is enough to guarantee a watch. He brought stunning humanity to a farting corpse in 2016’s Swiss Army Man and gave a tour-de-force physical performance. He’s an actor who commits no matter how silly the role, and it’s a delight to watch him try and make sense of the escalating madness around him with his unique physical disability. I was enjoying even the smaller moments like Miles’ difficulty hiding his alarming ailment with transparent lies or his interaction with a mentally ill homeless man (a scene-stealing Rhys Darby). 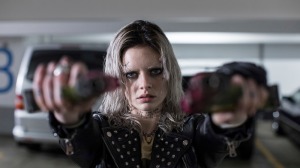 As the movie kept going, I felt my interest growing and that was because of the increased presence of Weaving as Nix, who is clearly the star of this crazy movie. Weaving should have been a Hollywood star after Netflix’s The Babysitter, and she was just as wonderful as the heroine in last year’s Ready or Not. Her character isn’t exactly much more than a murder pinup, a comic character come to life. She’s nearly unrecognizable in her punk rock assassin attire, including literal bullet teeth. She’s all nihilist attitude and clunky one-liners (“Suck my clit” needs some work). She has a tragic back-story that sets her up for vengeance and that’s all that’s needed from what could be a completely interchangeable back-story. It only serves as a needed character motivation point, one that is more compelling even in its shallow nature than Miles, who is on the run for his life but really is about trying to save his ex-girlfriend (Natasha Liu Bordizzo) who serves mainly as a damsel in distress for the last act. While I enjoyed Radcliffe as a performer, this is Weaving’s movie from the moment she struts into the frame. Her charisma pops off the screen even as her character is criminally blasé. She’s the kind of character that will pick up a dismembered middle finger just to give someone the gesture. Nix is more so a collection of weird and hip and sexy tics than an interesting character, but it’s Weaving and her jubilant, dangerous degree of fun that makes the character a scrubby version of Harley Quinn.

Guns Akimbo is like tasty junk food that can satisfy a very specific cinematic craving but you know, even as you’re consuming it, that this won’t be anything special. I wish the film had gone further in any direction, whether it was with the comedy, whether it was with more finely choreographed action, or whether it was in more outlandish set pieces like in 2007’s Shoot ‘Em Up. If you want to be a crazy cartoon, be a crazy cartoon. Give me even more characters like Nix and over-the-top violence that does something different besides geysers of head shot wounds. Guns Akimbo might work as a lesser Crank movie. This movie seems either to be too satisfied with itself or knowingly hiding its shortcomings with energy, edits, and attitude. I can’t tell which. Guns Akimbo is easy on the brain and maybe a little too easy on itself. My 13-year-old self would have loved this movie.