The Murder of Nicole Brown Simpson (2020) 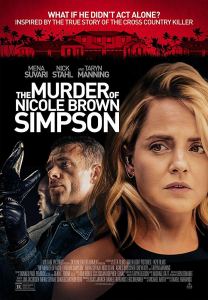 As soon as I read about the director of The Haunting of Sharon Tate’s follow-up movie, I knew it was destined for a spot on my worst of 2020 list. This filmmaker wasn’t exactly presenting nuanced and sympathetic portraits of famous dead celebrities, and instead was exploiting their fame and their famous demises for cheap genre thrills. The Murder of Nicole Brown Simpson was always destined to be a bad movie with these people involved with these intentions. This sleazy thriller is rife with bad decisions, bad faith, and victim blaming to its very nasty core.

Nicole Brown (Mena Suvari) is trying to start her life over after divorcing her famous husband, O.J. Simpson (Gene Freeman). She meets a painter named Glen (Nick Stahl) and invites him to paint her home, to make it more her new sanctuary. Except Glen is a disturbed drifter who will eventually be known as the Casanova Killer who had murdered many blonde women. From there, Glen stalks Nicole and terrorizes her to her very end. Sigh.

The very nature of its premise alleviates the guilt from Nicole’s abusive, controlling husband. Oh sure, the movie still says O.J. is dangerous and jealous and protected by his personal relationships with many of the local law enforcement, but this is mitigated by the very act of using O.J.’s own half-baked alibi assertion from the infamous cash-grab hypothetical literary tome, “If I Did It.” In this highly disingenuous “hypothetical,” O.J. says he might have met a friend named “Charlie” and it was “Charlie” who did the killing and O.J. says he was simply blacking out that night as an unexpected accomplice. First off, the very nature of this book is disgusting, but the fact that this movie uses it as a foundation to posit an alternative theory that lessens O.J.’s blood-stained culpability is like re-telling the Ted Bundy’s account where a frisky and mischievous friend was really the one consuming people. What exactly is the purpose of presenting this alternative theory, which is predicated on the flimsiest of even a whisper of evidence; Glen Rogers’ brother says that mentally disturbed Glen once told him he killed Nicole Brown. That’s it. Add Glen talking to a voice in his head, a dark impulse he calls “Charlie,” and that’s the only connective tissue the movie provides for this new theory.

The entire inclusion of this “Could it be someone else?” theory is for crass sensationalism. Because if the filmmakers were trying to do anything beyond gaining craven attention, they would present a more compelling relationship between Nicole and Glen. The portrayal makes Nicole look like the biggest moron and the movie seems to flirt with the insidious idea that she might have invited her murder onto herself. First, she meets Glen in her neighbor’s driveway, having never seen him before, and invites him into her home and offers him a job, and all of this is miraculously before she even knows the man’s last name, an address, or references. He makes a shifty statement about past work experience being “here and there” and she hires him. The next time we see them together they’re already sleeping together. It feels like I was watching character assassinating propaganda, especially recalling O.J.’s crazed accusations of Nicole sleeping with every many she could find because, to him, she must be a whore. In one of the more wince-inducing moments, Nicole admits to her therapists that she misses the sex with her abusive ex-husband. Any feminism points the filmmakers thought they were providing by showcasing Nicole’s terror and resolve in starting a life away from O.J. just get sabotaged again and again by moments like this. Because Nicole isn’t a person to these filmmakers, she’s a marketable victim who was too stupid to understand how dangerous multiple men were.

There’s also a problem structurally with The Murder of Nicole Brown Simpson because she discovers Glen’s unhinged side very quickly. There’s no prolonged buildup of piecing things together. There is half a movie left, which means the filmmakers have an awful lot of time to kill before the actual killings. There’s a drawn-out sequence where Nicole is shopping with the Kardashians (you better believe there are Kardashian kid cameos!) at a nearly empty mall and she sees Glen stalking her. The sequence just keeps going on and on until she’s now stalking him. It’s a sequence that fulfills little we didn’t already know about Glen as a dangerous man. This is further emphasized in unnecessary ways by showing him picking up a doomed woman at a dive bar (literally called “Sinners and Saints” – sigh) and suffocating her, setting her car on fire, and presumably leaving behind plenty of physical evidence like fingerprints. It’s a gratuitous sequence where we get to watch another woman get murdered before our special murder victim gets her showcase. There’s even a shockingly superfluous nightmare sequence that literally rips off the imagery from A Nightmare on Elm Street where Nicole is battling some invisible poltergeist that drags her up a wall and onto the ceiling. It’s filling time, which the movies does even after it finally meets its titular action. There’s a whole two minutes or so of watching a dog walker creep upon the Brentwood crime scene as if we already didn’t know what happened, so where is the suspense? Then the movie fills time even more blatantly by relying on a clip package of real-life TV news from the murders, the Bronco chase, the trial, O.J.’s acquittal, and then portions of his interview for “If I Did It.” It’s literally a clip show to get across that all-important 80-minute feature-length threshold. Watching this abysmal movie, it’s clear that the filmmakers had no real intention of presenting a story and were just presenting the most baseless historical “what if.”

The dialogue in this movie can be wretchedly obvious and trolling for forced profundity with heavily applied and snide dramatic irony. This occurred in the director’s previous film, using the audience’s knowledge of Sharon Tate’s eventual slaying to force a sense of literal and figurative premonition to use as dread. This was at its worse with her awful visions but it also translated to her many heavy-handed pontifications on whether she was fated. With this new film, Nicole is basically looking dead-eyed into the audience after every one of these lines. That includes an admission, “I worry he’s going to murder me and get away with it,” and that’s only five minutes into the movie. I would estimate twenty percent of Nicole’s dialogue in the movie is her contemplations that O.J. will be the literal death of her, like chiding a dismissive L.A.P.D. officer for eventual guilt about not intervening when he had an opportunity. These moments are meant to make Nicole Brown seem more tragic but why does she need any benefit of extra tragedy for empathy?

Look at this wig!

I chiefly pity Suvari (American Beauty). She likely thought she was doing the real Nicole Brown a service by portraying a woman who was trying to work up her courage to push back against her abuser. She probably thought these moments were humanizing Nicole, presenting a more recognizable face beyond the splashy tabloid headlines (see, she has difficulty working a home alarm system too!). I need to believe that Suvari felt she was doing some service because her name is listed as an executive producer, and I would hate to think she was onboard with the more wrongheaded and sleazy aspects of the film becoming a misguided reality. Suvari seems adrift for most of the movie, perhaps the weight of all that dramatic irony crushing her down. However, she doesn’t seem as adrift as Taryn Manning (Orange is the New Black) as a boozed-up cartoon of Nicole’s friend, Faye Resnick. She snorts cocaine. She tries to seduce Nicole at one point, referring to past trysts (more propaganda?). She has a remarkable helmet of a giant blonde wig that looks like it’s crushing her tiny neck. It’s a performance that seems too off-kilter that it almost reminded me of some of the acting I’ve witnessed in The Room. Then there’s Stahl (Sin City) who just acts like a sketchy guy from his first moment onscreen. It makes it hard to believe that Nicole would, after her interactions with O.J., so obliviously accept this new man into her home and into her bed. Then there’s Agnes Bruckner (Love and Chocolate) as a jaw-clenching Kris Kardashian, a character who probably should have just been removed entirely.

The Murder of Nicole Brown Simpson might not be as offensively bad as The Haunting of Sharon Tate, but even that declaration is not exculpatory. This is still a terribly written, terribly directed, and terribly made movie based on a terrible premise. Even if the filmmakers wanted to tell a compelling alternate theory to the much-publicized Trial of the Century, it sure doesn’t look like they had any interest other than grabbing their own attention-seeking headlines. There is no thought put into any part of this movie outside of its outrageous premise. At least we’re spared having to relive Nicole’s bloody death through several gross fake-out premonitions like Sharon Tate. The Murder of Nicole Brown Simpson wants to position its lead heroine as a tragic figure, but she was already a tragic figure, and it definitely doesn’t earn the artistic right to play Nicole’s real-life 911 calls where she frantically begs for help from her enraged husband. You don’t get to present a feature film that says O.J. didn’t do it and then play her real 911 calls of abuse from O.J. It’s a stark reminder of the resolute bad faith of the people involved in this lousy production. Beware famous dead celebrities, because even the grave can’t protect you from director Daniel Farrand’s gross revisionism for profit.