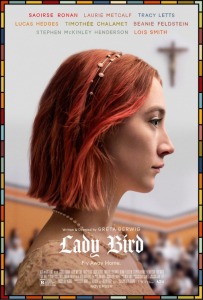 Coming-of-age movies typically coast on a combination of mood, sense of place, and character, and Greta Gerwig’s Lady Bird excels in all areas and supplies a straight shot of happiness to the senses. Gerwig serves as solo writer and director and tells a semi-autobiographical story of “Lady Bird,” a quirky, determined, feisty, self-involved, and vulnerable teenager (Saoirse Ronan) trying to leave the lower-middle-class confines of her Sacramento life for bigger pastures. Ronan (Brooklyn) is spectacular in the title role and displays a heretofore-unseen sparkling sense for comedy, punctuating Gerwig’s many witty lines with the exact right touch. This can be a very funny movie and it has a deep ensemble of players. Ronan’s character is a magnetic force of nature that commands your attention and finds ways to surprise. The film follows her high school senior year’s ups and downs, potential new friends, bad boyfriends, social orders, family struggles, jobs, and most importantly her dream of getting into an East Coast college and leaving the trap she sees is her hometown. Her parents (Laurie Metcalf, Tracy Letts) are stressed and exasperated with their demanding daughter. Metcalf (TV’s Roseanne) is outstandingly affecting as the beleaguered matriarch. Much of the movie’s ongoing conflict, and later triumphs, revolve around the fraught mother/daughter relationship, and Ronan and Metcalf are never better than when squaring off. This is a movie rich in authentic lived-in details and observations. It can stray into overly quirky territory but Gerwig as director has a remarkable feel for when to hold back. There’s a genuine and poignant family drama at its heart that doesn’t get lost amid the whimsical additions that cater to Lady Bird’s vibrant personality. By the end of a coming-of-age movie, the characters should feel a little wiser, having learned through heartache, bad choices, and changes in perspective. This isn’t a movie about big moments but about the ebb and flow of life and the formation of one’s sense of self. We should enjoy having spent time with these characters on their journeys. With Lady Bird, I couldn’t stop smiling like an idiot.