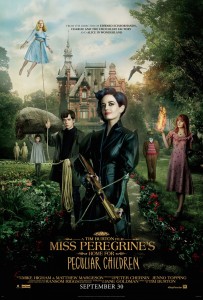 Miss Peregrine’s Home for Peculiar Children feels like Tim Burton’s X-Men franchise, and it’s just as awesome as that sounds. Burton has always had an interest in the outcasts and misfits of society and now he has his chance to leave an imprint on the ever-present superhero phenomenon. His own personal group of gifted youngsters is looking to form a funky family and fight against fearful forces that have their sights set on exploiting these special children or worse. It’s a natural fit for a man who has become a Gothic industry unto himself over three decades of peculiar and spooky filmmaking. This is Burton’s chance to flex franchise tentpole muscles with a subject matter perfectly attuned to his offbeat sensibilities, and watching the fabulous final product is akin to watching a master musician dive into Beethoven’s Fifth. This movie was flat-out delightful.

Jake (Asa Butterfield) is reeling from his beloved grandfather’s (Terrence Stamp) mysterious death. The old man loved sharing his stories about tending to the shape-shifting Ymbryne Miss Peregrine (Eva Green) and her wards, a group of children with special abilities including starting fires, controlling plants, invisibility, and being able to float lighter than air. On a trip to Wales to investigate grandpa’s stories, Jake discovers a time portal and is taken back to the WWII era where Miss Peregrine is waiting for him. She and her children relive the same day and will never age. They’re hiding from Barron (Samuel L. Jackson) and his group of scientists who wish to hunt the children. Jake is tasked with being the new protector, as he is the only one that can see an invisible band of slender monsters known as hollows that feast on the children. 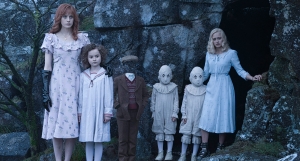 There’s a whimsical nature to the dark elements, and the script is rife with enjoyable payoffs and fun moments that cry out for a full visual immersion. This is Burton’s best film since 2007’s Sweeney Todd (I have a soft spot for that macabre musical), arguably best since 2003’s Big Fish, and maybe his most fun movie since his 90s heyday. If you’re a Burton fan, you’ll be tickled by all the imagination and humor. I grew up on the cinema of Beetlejuice and Edward Scissorhands and The Nightmare Before Christmas (yes, directed by stop-motion maven Henry Selick but still very much a Burton film), so I’ll admit that seeing Burton in high form once again warmed my little mischievous heart.

You get a sense just how involved Burton was in the filmmaking and its details, the degree of passion and involvement, and also his commitment to being a dark movie intended for peculiar children and adults with macabre interests all over the world. I kept thinking that the 12-year-old version of myself would have adored this movie, never mind the 34-year-old version of myself who greatly enjoyed it too. This feels like a natural evolutionary step for children and adolescents who gorged themselves on the works of Edward Gorey and R. L. Stine. It’s not a significant spoiler but it’s something I feel you, dear reader, need to know in order to properly assess just how wonderfully morbid the movie can come across. There is an entire visual feast of a group of villains dining upon the delicacy of… children’s eyeballs. You read that right. It’s a silver platter piled high with severed eyeballs, and they get slurped down like it’s spaghetti. I could only cackle to myself at the audacity of the movie to embrace the fun of the darkness rather than hiding from it, mitigating it, trying to be delicate with tone. The villains want to return to a normal state that can only be achieved by consuming the eyeballs of peculiar children, and so they are hunted not for sport or prejudice but for eyeballs. That’s wonderfully squirmy, and it definitely affected me, an avowed cinema patron who gets extra squirmy with any onscreen eye trauma. There are other creepy and memorable moments, like a dead child being used as a ventriloquist doll and the slenderman-styled hallows creatures. The moments are plenty but they don’t choke the story’s momentum, which hums along with great imagination and lucidity.

There’s a lot going on with Miss Peregrine, and Jane Goldman’s (Kingsmen) screenplay juggles a lot of rules and world building without losing momentum. I was intrigued early and the movie would widen its focus, providing more texture and connection to the world in calculated doses. It was enough that I always felt like I was learning something while still being able to see how the pieces snapped together in retrospect. There’s time travel that has to be done at a very specific point, the rules of who can travel back in time to these bubbles of safety, the history of this specific day stuck in time, the non-linear history of the protectors, the fact that the bubbles are also teleportation hotspots, the history with Jake’s grandfather, the history of the Ymbryne and their powers, the powers of all the peculiars, dream prophecy, mad scientists and their peculiar ailments, the differences between the hallows and the predatory scientists, and also establishing the character dynamics of several lost children and a budding YA romance. It’s amazing that Goldman’s script is as understandable as it is considering all that heavy lifting. It’s not completely free of muddled plot points and some hazy explanations, but those instances are a clear minority to what works so effectively. I wanted to know more about this world, and once they added time travel and teleportation, I was hooked. I enjoyed the movie so much that I’m considering reading the additional books for my next freaky fix. 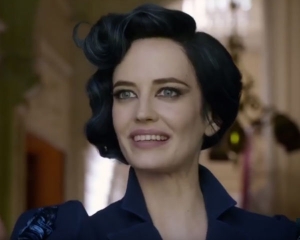 The acting ensemble is full of bright spots and none brighter than the new queen of genre gusto, Eva Green. I raved about Green’s magnetic performance in the considerably lesser 300 sequel. She was easily the best part of that movie and it suffered whenever she wasn’t on the screen. The same can be said for the too-long-in-the-making Sin City sequel. She was the best thing in Burton’s otherwise forgettable Dark Shadows feature. In short, this woman is incredible, and she digs into the vampy and ridiculous with the right degree of malevolence and glee. Green is a wonderful hostess into this magical world, and her foreknowledge gives her a caffeinated energy that makes her even a tad more peculiar. Her children are all fine actors who have uneven parts thanks to the unfair distribution of their powers. Not everyone gets super useful abilities. I felt sorry for the kid who projected his dreams from his eyeball especially during the third act scuffles. A mouth in the back of the head doesn’t seem very useful either. I enjoyed the idea that the invisible kid needs to be fully naked to be fully invisible, and everyone acknowledges this reoccurring fact with shoulder-shrug nonchalance. The standout amongst the peculiars is Ella Purnell as the winsome girl who will float away. She has an innocent and yearning quality that doesn’t sink her character. She’s more than just a love interest to Jake and Purnell helps channel great affection. Jackson (The Hateful Eight) is expectantly highly entertaining as the lead villain and Butterfield (Ender’s Game) is perfectly acceptable as an audience surrogate into this wild world.

I was duly impressed with just about every element, from the structure of the screenplay and its precision with information and intrigue, to the level of acting, to the dark and whimsical tone, to Burton’s own peculiar particulars that fill out the film with adoration. It may sound corny but there is an affection woven throughout the film, for its dispirit outcasts, for their strangeness, for the ardor of telling a spooky story that can appeal to children without pushing away adults. There’s a care that’s been absent Burton’s other recent films, especially Dark Shadows, which left me bewildered whether Burton had any genuine fondness for the source material. Miss Peregrine’s Home for Peculiar Children is a haven for fans of the peculiar, Burton’s oeuvre, and those looking for a quality children’s film that has some bite. I can only hope for more fantastical adventures.