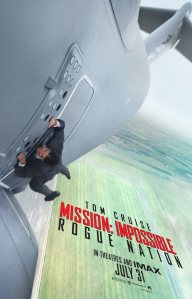 Not as outlandishly crazy as the Fast and the Furious series, not as beholden to tradition as the Bond series, the Mission: Impossible series doesn’t get the same notoriety but I’d declare it the most consistent and best action franchise going today. Each new film is a distillation of their director’s strengths, keeping things fresh, and the mainstay is Tom Cruise in prime action hero mode and risking his life like a madman. While not as dizzyingly entertaining as 2011’s Ghost Protocol, Rogue Nation is another fun and action-packed spy thriller with terrific and memorable set pieces. The plot involves Ethan Hunt (Cruise) and his team on the run, again, as their agency is shut down for its reckless methods. A rival agency known as The Syndicate is plotting political assassinations, so Hunt and his team (Simon Pegg, Jeremy Renner, Ving Rhames) must work along the fringes to save the day. The newest addition is Swedish actress Rebecca Ferguson as a mysterious ally and antagonist for Hunt. She’s smart, formidable, and not treated as a romantic interest or overly sexualized (progress). After Alicia Vikander’s superb performance in Ex Machina, and now Ferguson’s steely turn, it’s quite a booming year for Swedish imports. The series’ star is still Cruise and his cavalier treatment of his 50-year-old body in the pursuit of the daredevil stunts. The opening with Cruise attached to the outside of an ascending cargo plane is a stunning image jolted by the charge of realism. An underwater vault break-in is wonderfully developed. The snazzy car chases, motorcycle chases, and foot chases all benefit from Cruise being front and center. Say what you will about the man but he’s a movie star. The biggest problem with Rogue Nation is much like Ghost Protocol in that it peaks in the middle. The last act takes place entirely in London and it just can’t compare with what came earlier, which leaves the movie lumbering to a close with its rather substandard villain. Even with a less than stellar conclusion, Rogue Nation is another entertaining, fun, and thrilling action movie that would be the best the summer has to offer if it weren’t for the highs of Mad Max.