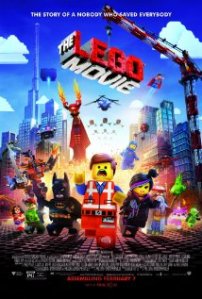 Highly creative, cheeky, frenetic, and bursting with visual splendor, The LEGO Movie will likely surpass all expectations you had for what was assumed a 90-minute LEGO commercial. I cannot even tell if it’s actually a commercial or a subversive consumerist satire, or perhaps a blending of both. Writer/directors Phil Lord and Christopher Miller take their same anarchic, comic rambunctious absurdity exhibited in Cloudy with a Chance of Meatballs and 21 Jump Street and produce another movie so fast-paced, so freewheeling in energy, and so comically alive that you feel rejuvenated by the end. These are gentlemen who fully know the storytelling power with animation and they create worlds that are astounding to watch. While completely computer generated, the world looks like it was stop-motion. In fact, the detail that everything in the physical world is made of LEGOs was a nice touch, including fire, water, and smoke. The story of an unremarkable guy (slyly stupidly voiced by Chris Pratt) mistaken for The One, and the complications that arise, is a fitting satire of superhero fantasy mythos filmmaking. The social commentary on conformity and the media is cutting without distracting from the plot’s ongoing mission. The characters are fun, the jokes land assuredly, and the action sequences are mesmerizing. But then it takes a meta turn in the third act that gives the movie a whole other prism that helps define its previous outrageousness while leading to a poignant message about the inclusiveness of play. It’s a movie that celebrates imagination and individuality, and while it will more than likely also sell a crapload of toys, it’s an animated film with more on its mind. To paraphrase the top radio hit in the world of LEGOS, everything is just enough awesome.