One rainy Thanksgiving day, two little girls go missing. Keller and Grace Dover (Hugh Jackman, Maria Bello) and their neighbors, Franklin and Nancy Birch (Terrence Howard, Viola Davis), discover their two young daughters have gone missing. A manhunt is underway for a suspicious RV, spearheaded by Detective Loki (Jake Gyllenhaal). The RV is found with Alex Jones (Paul Dano) inside. The problem is that there is no physical evidence of the missing girls inside the RV and Alex has the mental capacity of a ten-year-old. He’s being released and Keller is incensed. He’s certain that Alex is guilty and knows where his missing daughter is being held. One night, Keller kidnaps Alex and imprisons him in an abandoned building. He beats him bloody, demanding Alex to tell him the truth, but he only remains silent. Loki has to deal with finding the girls, finding a missing Alex, and trailing Keller, suspicious of foul play.

This is a movie that grabs you early and knows how to keep you squirming in the best ways. The anxiety of a missing child is presented in a steady wave of escalating panic. The moment when you watch the Dover and Birch families slowly realize the reality of their plight, well it’s a moment that puts a knot in your stomach. Prisoners is filled with moments like this, that make you dread what is to come next. The crime procedural elements of the case are generally interesting and well handled to the point that they feel grounded, that these events could transpire, including police mistakes. The central mystery sucks you in right away and writer Aaron Guzikowski (Contraband) lays out clues and suspects with expert pacing, giving an audience something new to think over.  At 153 minutes, there is a lot to chew over in terms of plot developments and character complications. It’s a compelling mystery yarn and shows such promise, though the last half hour cannot deliver fully. Fortunately, Prisoners is packed with terrific characters, a real foreboding sense of Fincher-esque chilly atmosphere from director Denis Villeneuve (Incendies) and greatest living cinematographer Roger Deakens (Skyfall). The film’s overall oppressive darkness is also notable for a mainstream release. The darkness doesn’t really let up. It’s hard to walk out feeling upbeat but you’ll be thankful for those punishing predicaments. 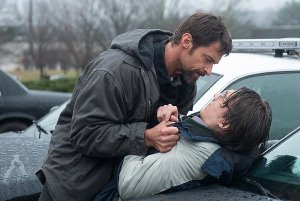 By introducing the vigilante torture angle, Prisoners is given a dual storyline of suspense and intrigue. How far will Keller go? Will he get caught? What will his friends think? Will they be supportive or will they crack? How does this change Keller? That last question is the most interesting one. Others tell us how Keller is a good man, and he’s certainly a devoted family man, but does a good man imprison and torture a mentally challenged man? Does a good man take the law into his own hands? If it meant the difference between your child being dead or alive, how far would you go? These are the questions that bubble up and the movie makes you deal with them. The torture segments are unflinching and challenge your viewer loyalty. You will be placed in an uncomfortable moral position. Then there’s just the what-would-you-do aspect of the proceedings. Could you torture someone, possibly to death? Fortunately most of us will never have to find out. I do wish, however, that the movie had gone further, complicating matters even more severely. It becomes fairly evident halfway through that Alex is innocent. It would have been even more interesting to intensify Keller’s legal troubles. If the police have their man, what does Keller do with Alex? Does he let him live after everything Keller has done? I think it would have worked as a logical escalation and put the audience in an even more uncomfortable position, forcing us to question whether Keller deserves to get away with what he did or pay a price.

What separates Prisoners from other common thrillers, and what must have appealed to such an all-star cast, is the raised level of characterization on display. Jackman’s (Les Miserables) intensity is searing, as is his character’s sense of pain and futility. By all accounts, this is the best acting work Jackman has done in his career. Keller’s determination is all consuming, pushing away his doubts with his reliable pool of anger. Everyone is failing him so he feels he must take matters into his own hands, and the film does a fine job of relating his frustrations and urgency. But Keller is also in danger of derailing the ongoing investigation, becoming a liability to finding his daughter. This predicament pushes Loki into the tricky role of having to defuse parental intrusion, pushing him into a role he loathes, having to tell a harrowed father to back off. Loki is also consumed with the case, causing plenty of internal tumult and chaffing with the inefficiency and miscommunication of the police force. Gyllenhaal (End of Watch) doesn’t play his character big; he keeps it at a simmer, with hints of rage below the surface. His character is certainly richer than the Driven Cop we’ve often seen. His character is given less moral ambiguity but you feel his frustration working within the system and hitting dead ends. These two performers are both ticking time bombs.

The rest of the supporting cast has a moment or two to shine, though the characters are given less to work with. Bello (Grown Ups 2) is hastily disposed of from a plot standpoint by making her practically comatose with grief. Davis (The Help) knows how to make the most of limited screen time (see her Oscar nominated performance in 2008’s Doubt as evidence), and she’s heartbreaking in her moments of desperate pleading. Howard (Lee Daniels’ The Butler) is meant as the foil to Keller, a voice of moral opposition, but Howard lets the gravity of his involvement in horrible acts hit you hard. Dano (Ruby Sparks) has the toughest part in many ways because of his character’s brokenness and the fact that he’s being tortured so frequently. It’s hard not to sympathize with him even if part of you suspects his guilt. Naturally, Dano is adept at playing weirdos. Melissa Leo (Olympus Has Fallen) is nearly unrecognizable as Alex’s older aunt caring for him. She’s prepared for the worst from the public but has some nice one-on-ones where she opens up about the difficulty of losing a child herself.

Prisoners is such a good mystery that it works itself into a corner to maintain it, ensuring that no real answer or final reveal will be satisfying, and it isn’t. I’m going to tiptoe around major spoilers but I will be delving into some specifics, so if you wish to remain pure, skip ahead. The culprit behind the child abductions, to put it mildly, is underwhelming and rather obtuse in their wicked motivation. The specified reason is to test people’s faith and turn them into monsters by abducting their children. This comes across as an awfully nebulous philosophical impetus, and it’s a motivating force that I find hard to believe even in the grimy, dark reality the movie presents. It just doesn’t feel grounded, more like a last-ditch conclusion to a TV procedural. However, what makes this ending worse is the false turns and red herrings that Prisoners utilizes. Every mystery requires some red herrings but they need to seem credible, and if executed properly, the characters will learn something useful through the false detour. The issue with Prisoners is that it establishes a secondary suspect that is so OBVIOUSLY the guilty guy, compounded with plenty of incriminating evidence including the missing children’s clothing covered in blood. When this suspect comes undone, his sketchy behavior starts to become a series of contrivances. They introduce a character that is too readily the guilty party, and then they just as easily undo him. And here’s another character of questionable motivation. Plus, there’s the central contrivance of having two characters that remain mute under all torturous circumstances unless the plot requires them to say something that can only be interpreted in an incriminating manner. These mounting plot contrivances, and an ending that wants to be ambiguous but in no way is, rob Prisoners of being the expertly crafted thriller it wants to be. It still hits you in the gut, but you’ll be picking it apart on the car ride home.

Grisly, morally uncomfortable, and genuinely gripping, Prisoners is a grownup thriller that isn’t afraid to go to dark places, with its characters and its plot. It hooks you early and keeps you on the hook, pushing its characters to make desperate decisions and asking you to think how you would perform under similar pressure. It’s a fascinating meta game and one that also adds extra intrigue to a rather intriguing mystery. It may not be revolutionary, but Prisoners is an above-average thriller with strong suspense and characterization. Where Prisoners stumbles is how it brings all this darkness to a close. The ending is rather perfunctory and not terribly satisfying; perhaps no ending would have been truly satisfying given the setup, but I’d at least prefer an alternative to the one I got, especially since it feels less grounded than the 140 minutes or so beforehand. It’s an ending that doesn’t derail the movie, but it certainly blunts the film’s power and fulfillment. Then again perhaps a word like “fulfillment” is the wrong term to use on a movie that trades in vigilante torture and the cyclical nature of abuse. In pursuit of perceived justice, what are we all capable of doing? The answer is likely surprising and disheartening for many, and Prisoners deserves credit for pushing its audience into uncomfortable positions and reflections.