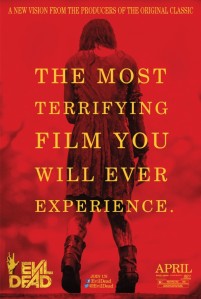 Upping the gore quotient considerably but having little else of merit, the remake of Evil Dead loses just about everything that made the original special. Gone is the sense of humor, unless you just count the quantity of gore to be the qualifier for “humor,” and gone is any real sense of a creative spark. It looks good thanks to director Fede Alvarez, and the practical gore effects can be memorable and truly disgusting in the best possible way, but it just doesn’t feel like an Evil Dead movie. It makes the same mistakes that your typical dumb horror movies do, from a lack of clarity to one-dimensional characters (I think Blonde Girlfriend had one line of dialogue for the first hour) to repeated rule breaking. There are a bunch of callbacks to the original Evil Dead but they serve little other purpose. The finale, after a series of fake-outs, involves a weak showdown with a Big Bad that’s anything but. I expect better from a remake sanctioned and produced by the original director, Sam Raimi, and star Bruce Campbell. Maybe they knew it was only a matter of time before their 1981 film, and its superior 1987 sequel, would be remade by a cannibalistic Hollywood, so they wanted to cash in while they could. Or maybe they just argued, if anyone was going to make a poor remake, it might as well be them. If you’re hungry for gore, then Evil Dead may suffice, otherwise it’s a horror movie that’s too familiar, too mediocre, and ultimately too disappointing to recommend.