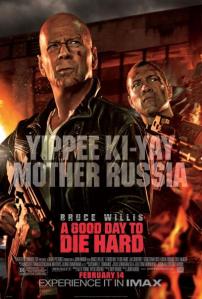 A Good Day to Die Hard, the fifth entry in the series, is clearly, on all fronts, the worst movie in the franchise. I suppose this shouldn’t come as that big of a surprise. Most fifth movies are not seen as peaks in creative achievement (I will go to my grave singing the praises of Saw 6, one of the few late sequel successes). I’m sad to report but Die Hard 5 is just a lousy action movie trying to get by on the good will of its famous heritage.

John McClane (Bruce Willis) is visiting Russia to find and help his estranged son, Jack (Jai Courtney). Dad thinks his boy is in trouble with the law but really Jack is a CIA agent working undercover to prevent a nuclear arms sale. A Russian political figure is promising to go public with his findings of corruption, and the man falls under the protection of John and Jack McClane. Father and son must dodge all sorts of danger and maybe, just maybe, they’ll bond over the experience of shared peril.

All of the story and character problems would have been forgivable, or at least mitigated, if this movie actually delivered the goods when it came to its action sequences. Sadly, Die Hard 5 is just thundering mediocre from start to finish. No, I take that back. In the last five minutes of the movie, it has one action development that is unexpected and interesting and different, and that’s when John McClane drives a truck out of the back of a helicopter to drag down the chopper. I repeat, this lone moment of action interest occurs with about five minutes left until the end credits roll. That’s a whole lot of gristle to get to something good. Until this point, Die Hard 5 is replete with car crashes and explosions and noisy exchanges of gunfire, but what does it all add up to? It’s like it has familiar action elements we’d expect in this sort of adventure, but it never seems to know what to do with them. Great action takes advantage of geography, moves the story forward, and escalates with natural complications. Most of Die Hard 5 is repetitious fights or shootouts in lazy locations (oh look, another warehouse-type building!). There’s a car chase through the streets of Moscow that should be exiting, but instead it just stays the same as it began. It’s two cars smashing into others. The final action takes place at the Chernobyl nuclear site, and yet it could have been just any other unwatched warehouse. I never thought I’d ever go to a movie with “Die Hard” in its title and be bored… by the action. 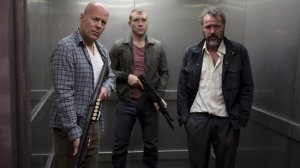 Here’s the deal: if you’re going to produce action sequences that don’t just stretch believability, they throttle it, then you better produce some memorable material. I long for the simply days of the original Die Hard where John McClane was a mere crafty mortal, confined to one location, using his wits, training, and stealth to turn the tables on the bad guys. He was an ordinary cop and that made him even easier to root for. Now he’s graduated to the Table of Indestructible Action Stars, men who can survive any scrape with barely a scratch no matter how improbably or death defying. I accept this change, but if you’re going to present larger-than-life action, you have an obligation as a filmmaker to make it entertaining. Die Harder had the man ejecting himself out an exploding airplane, and that was cool. Live Free or Die Hard had McClane driving an 18-wheeler along a collapsing highway, finally jumping onto a downed fighter jet. It’s completely over-the-top but it’s memorable and entertaining and, yes, cool.

The more I think back, the better 2007’s Live Free or Die Hard looks. It worked surprisingly well, well enough that I claim it as my favorite Die Hard sequel. First off, that movie had memorable action exchanges; I can still recount four or five sequences off the top of my head years later. Even if it was a standard fight between two characters, it found ways to make it interesting, like a fight between McClane and Maggie Q (TV’s La Femme Nikita) that extended into an elevator shaft and a falling auto. While Timothy Olyphant (TV’s Justified) couldn’t hold a candle to Alan Rickman (Harry Potter franchise) as far as movie villainy, the man was tremendously better than the pitiful bad guys in Die Hard 5. You have to let your villains have opportunities to be villainous, but they also have to be competent at what they do or else the movie is too obviously one-sided. Look we all know the hero will prevail but we like to see an even match for most of the running time. The Russian bad guys in this movie just suck. They suck and characters and they suck as bad guys and throwing twisty double-crosses and triple-crosses, just to keep an audience awake, make their master plan seem even more convoluted and implausible. All of this chaos is over a file whose possession, if I’m not mistaken by the needless confusion of the twists, resides with the villains for a good period of time. Why are they still going through this whole charade? Also, they suck. 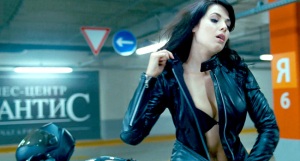 The idea of tagging McClane with his son seems like a weak attempt to extend the franchise beyond the ownership of an aging Willis. I don’t care about John McClane’s kid. This isn’t Roots. I don’t come to these movies to check up on the guy’s brood of feisty kids, which by the way, Die Hard 4 did this same storyline much better with his daughter, Lucy (Mary Elizabeth-Winstead). Jack McClane is a thickheaded dolt of a son, and as far as a charismatic action figure capable of taking over a franchise, don’t hold your breath. The father/son dynamic is so poorly developed. They mostly just grunt at one another and we call it characterization. Pairing McClane up with a sidekick has worked before but only when the characters are vastly different from the central man of action, like Samuel L. Jackson and Justin Long’s more comedic characters. They provided contrast and conflict and brought out different sides of the John McClane character. When you pair John McClane up with his son, who happens to be a younger version of his dad, you get nothing. I already got one John McClane onscreen; I didn’t need a watered-down, charisma-free clone. If they’re going to continue the franchise with one of John McClane’s kids, I pray that it’s the more assertive and capable Lucy.

A Good Day to Die Hard is just not a good movie at all, and it’s an even worse sequel. The fact that I endured 97 minutes of a Die Hard movie and had to scramble for anything positive to say about the action should say more than the problems with logic, plot, character, pacing, and overall production. Willis doesn’t even look like he’s enjoying himself any more. The film never grabs you, never bothers to show you something different, and after a while it simply just beats you into submission with its video game-like artificiality and redundancy. I demand more attention and care put toward my action sequences rather than treating them like a tossed salad. Sure the right elements are there but they’ve been given no thought or care. I was literally battling sleep during long portions of this awful movie. For fans of the series and Willis, it’s hard to settle on any other conclusion but one of disappointment. The story is muddled and generic, the villains are muddled and generic, the action is muddled and generic. You get the idea, and Die Hard 5 is routine to the point of autopilot, a soulless cartoon of careening bodies and speeding bullets. The only reasonable excuse I can give for seeing this movie, lowered expectations and all, is just to see how low the Die Hard franchise has fallen.