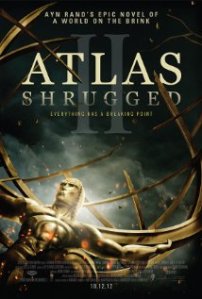 You’d think after the horrible and horribly boring Atlas Shrugged: Part One that a promised Part Two might just disappear into the ether. If only we could have been so fortunate. Ayn Rand’s cautionary opus about the evils of big government is given another creaky adaptation that fails to justify its existence. I feel like I could repeat verbatim my faults with the first film. Once again we don’t have characters but mouthpieces for ideology, an ideology that celebrates untamed greed. Once again the “best and brightest” (a.k.a. world’s richest) are disappearing and the world is grinding to a halt without their necessary genius. Does anyone really think if the world’s billionaires left in a huff that the world would cease to function? The assumption that financial wealth equates brilliance seems fatally flawed. Once again it’s in a modern setting where America has gone back in time to value railroads. Once again the main thrust of the inert drama is over inconsequential railway economics. Once again people just talk in circles in cheap locations. Once again the government agencies are a bunch of clucking stooges, eager to punish successful business. Once again Rand’s Objectivist worldview is treated as gospel and value is only ascribed to the amount of money one can produce. This time we have a slightly better budget, a better director, and some recognizable actors like Samantha Mathis, Esai Morales, Ray Wise, Richard T. Jones, and D.B. Sweeney as the mysterious John Gault. The story transitions to a ridiculous government mandate that include such incomprehensible edicts like making sure no one spends more money than another person. Can you imagine the paperwork involved? This woeful sequel will only appeal to Rand’s most faithful admirers, and you probably don’t want to hang out with those people anyway. There’s your clue: if you see someone carrying a copy of Atlas Shrugged: Part Two they either lack taste or are far too generous with movies. If there is indeed a concluding Part Three, it will be further proof that Rand’s market-based screeds are not accurate. The market has already rejected two of these dreadful movies.