X-Men Origins: Wolverine has been slashed from all sides. First, the movie has not been able to shake bad buzz, from extra reshoots to rumors about conflicts between the studio and the director. There was even one rumor that the head of 20th Century Fox Studios ordered a wall repainted a happier color. Then in early April it got even worse. A DVD-quality print of Wolverine was leaked onto the Internet and spread like crazy, and once something finds itself inside the realm of cyberspace it cannot be put back. The reaction to the leaked copy was mixed, at best. The studio went into damage control mode, stating that the leaked copy was an unfinished work print, that they too were not thrilled with this version and paid millions for reshoots, and the final version that would be released in theaters had 20 minutes of new stuff and 10 minutes additionally edited out. But guess what? The wolverine’s out of the bag, it’s the same exact version minus some completed special effects shots. What amuses me about this whole situation is that the studio is on record trashing the movie, saying they were unhappy with this version, and yet this is the final release. After having seen Wolverine, at least I can say that those Fox execs know mediocrity when they see it.

We get to witness the storied history of Wolverine (Hugh Jackman), which goes all the way back to the pre-Civil War era. Born James Logan, and a mutant, the kid had the unusual ability to produce three jagged bone claws from his knuckles. Logan also had the ability to miraculous heal like his older brother, Victor “Sabertooth” Creed (Liev Schreiber). The two of them make use of their primal, animal instincts and near invulnerability by fighting in every major U.S. war, from Civil to Vietnam. Eventually that kind of thing gets noticed, and General Stryker (Danny Huston) recruits the brothers to be apart of a mutant mercenary group. The group also includes the likes of William “Deadpool” Wade (Ryan Reynolds), “The Blob” (Kevin Durand), and some other unimportant mutants (one of them played by a Black Eyed Pea, will.i.am). Wolverine walks away from the group when he decides that he isn’t cut out for a cutthroat life.

The man finds a quiet place to live along the Canadian Rockies. He’s found a hard-working job, lumberjack, and a good woman, Kayla (Lynn Collins), who loves him. All of this is ruined when Sabretooth comes back around, intent on eliminating the former mercenary members one by one. Stryker appeals to Wolverine to apply for the Weapon X program. He says he can give Logan the tools for his revenge. Wolverine then undergoes the famous procedure that bonds his skeleton with adamantium, an unbreakable metal, and his bone claws become extra sharp metal. Stryker has other plans, naturally, and Wolverine breaks out of the facility. Stryker tells his assassin, “Bring me back his head.” Sorry pal, but you’re the one that just spent half a billion dollars giving Wolverine an unbreakable spinal column. 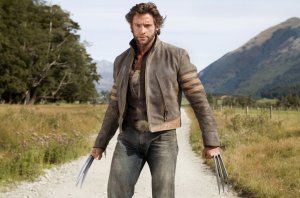 Is this origin tale worth telling? Short answer: no. The mysteries behind Wolverine’s back-story aren’t too involving and the answers make the character less interesting. I don’t really care why Wolverine got his metal skeleton or how he came to be an amnesiac, I just accept that the man has some mystique to him. I care even less that one of the answers to those mysteries is a murdered lover. The plot is incredibly thin; Wolverine meets one mutant who tells him to meet another mutant who tells him to meet another mutant, etc. Eventually the film heads for a mutant showdown that plays out like a lame video game, specifically the mid-90s Mortal Kombat (the Final Boss super villain resembles the blade-handed Baracka). What are Gambit (Taylor Kitsch) and Emma Frost doing in this? That?s not the end of the mutant cameos, either. I feel like the only thing we learn about Wolverine is that his super sense of smell cannot detect the difference between real blood and stage blood. The filmmakers think character development involves someone saying no to slaughtering innocents, and then other characters keep telling him, “You’re not an animal.” The movie meanders from one unimaginative special effects set piece to another, stopping at points to shove in various mutants that serve little purpose to the story other than diehard comic fans will be more forgivable.

Oh, but what to do when your main character is indestructible, your main villain is also indestructible, and your other lead villain cannot be killed because he?s due for an appearance in X-Men 2? Why you bring in a third, nigh indestructible being into the stakes, however, this being doesn’t already play into the established X-Men onscreen mythos, so this guy’s okay to kill off, that is, until he too gets a movie built around his character and then that movie has to backtrack to fill in on time before its capped ending. We already had a healing ability mutant with super claws vs. a healing ability mutant with super claws smackdown in X-Men 2, where Lady Deathstrike fought Wolverine. That fight was brutal and well staged. The fights in Wolverine’s big show are uninspired; how much stabbing can you watch between people who instantly heal? Also, apparently another side effect of the Weapon X program is that these metal claws are self-cleaning, because every single damn time Wolverine stabs someone there isn’t a droplet of blood to be found on his claws. It?s hard to get emotionally involved in characters that are fearless and have little at stake. Which, of course, is why Logan had to be given a cruddy romance where he gets to hold his dead lover?s body in his arms and bellow to the heavens for what feels like the 80th time. Seriously, twenty percent of all the dialogue in this movie is some combination of growling, spitting, and bellowing. 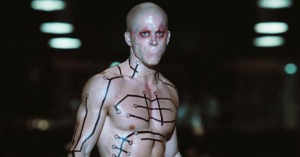 Whatever the budget was for this movie, well, apparently it wasn’t enough. The adamantium effects looked perfectly reasonable in the first X-Men film and that was nine years ago, so I cannot understand why the claws look astoundingly fake this go-round. They look like direct animation, like Wolverine is holding cartoon claws a la Who Framed Roger Rabbit? When did they become so thick too? These claws are like the size of the steak knives you get at restaurants.

Jackman deserves some of the blame here since he is listed as a producer and he hand selected director Gavin Hood (Tsotsi, Rendition) who does not have the interest or the eye for this kind of material. Hood lacks the finesse and vision to stage exciting action sequences, which explains why he falls back on tired genre tropes like the slow-mo strut in front of fireballs. I am dead certain that this stupid super assassin was pushed into the movie after film producers saw how much money the bullet-curving Wanted made the previous summer. The movie borrows heavily from recent Marvel Origin comics, or so I’m told, which is where the whole “Wolverine through the ages” storyline comes from. Personally, I don’t much care for the idea that Wolverine’s healing ability also deters aging until you hit that agreeable, desirable Hugh Jackman age range, but fine, whatever. The movie takes great effort to showcase Jackman’s flawless physique, and this dude is ripped to the point that you can see bulging veins. I just wished Jackman made more use of his acting muscles in this movie. He snarls and glares, and even has a softer moment or two with Collins, but rarely does Wolverine get to prove why he is such a beloved comics character. 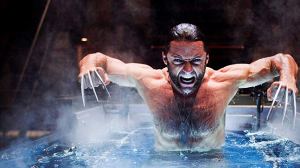 Thank goodness for Liev Schreiber (who actually also co-starred with Jackman in the forgettable romantic comedy, Kate & Leopold) because this man entertained me from start to finish, which is more than I can say about his movie. Schreiber has fun with his role and totally buys into the character’s animal instincts. He relishes the kill. The bizarre sibling rivalry between he and Wolverine is the best part of the movie, and the interplay between the two actors is when the movie has its few moments of life. Like Watchmen, the film finds its creative peak during the opening credits, as we watch Jackman and Schreiber claw and bite their way through American battlefields.

Here’s an easy solution to the Wolverine amnesia issue that doesn’t involve the use of admantium bullets. Kayla (Silverfox) has the power of hypnosis through touch, so why not in the emotional climax have her touch her dear lover Wolverine and wish, “Forget me. Forget all about me.” There, problem solved, and this way it works emotionally and organically with the story. It took me an hour after seeing X-Men Origins: Wolverine to come up with a better ending, so just imagine what more time will allow. Jackman and company are lost thanks to a mediocre script that sacrifices character for action beats, and even then the action is fairly mundane. There are a handful of cool moments, like Wolverine propelling himself onto a helicopter from an exploding car, but after four movies nothing has come close to producing the adrenaline rush that was the X-Men 2 sequence where Logan unleashes his berserker rage on the commandos in the mansion. By the end of his first solo outing, Wolverine is left without any memory. I won’t say we should all be so lucky but the X-Men filmmakers would be better off paying little attention to this origin tale, unless they want to bring Schreiber back, which they should do at all costs.