Old people and rock and roll seem like contradictory terms. It’s easier to imagine a 70-something grandma listening to the soothing tunes of Lawrence Welk or the Andrews Sisters than the likes of Sonic Youth and The Clash. Young @ Heart is a documentary that follows a unique chorus made completely of senior citizens (the youngest member is 72) who travel the country singing contemporary rock songs. Now, bear witness to great-grandmothers rocking at a reasonable hour and partying on days where they take their meds.

Once old people reach a certain aged age they fall into the same category as children, and by that I mean you can position them to do anything out of the ordinary and it suddenly becomes adorable. Seeing a baby wear a top hat? Cute. Seeing an old person dance to a modern rock song? Cute. I don’t make the rules, folks, but the end of life and the beginning of life have much in common, which includes the universal appeal of young and old doing things unlikely for their age. So, yes, Young @ Heart has a steady supply of adorable moments, especially as you watch how joyous many of the members are when they practice. Many members of the chorus have severe medical ailments and profess that participating and singing has medicinal benefits. They feel young and energized, and sometimes the members will defy doctor’s orders to attend. It is clear how much singing can mean to these people, and watching them come alive is undeniably heartwarming, but it’s downright moving when the Young at Heart chorus branch out. They perform at a prison and literally bring incarcerated prisoners to tears. I’ll admit that I was fighting back tears myself during the stirring performance of Coldplay’s “Fix You,” which is given a somewhat profound new meaning. The lyrics, “Lights will guide you home,” and “When you lose someone you can’t replace,” are given more relevance when sung by octogenarians who have all experienced recent loss amongst their ranks. 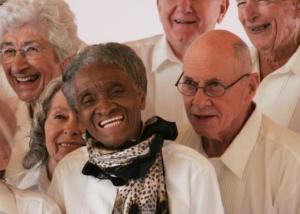 With such a naturally intriguing premise, it’s a shame then that director Stephen Walker doesn’t do more with the material. In many ways, Young @ Heart is a rather ordinary documentary that forgoes several opportunities to dig deeper. The interviews are rather basic and rarely penetrating, and the narrative structure of practicing for the big show means that the concluding fifteen minutes will be locked into being the performance. Walker narrates the movie and often inserts himself into the film because it seems like he wants to be part of the fun. Documentaries can succeed from objective and subjective point of views, but I get frustrated when people like Walker don’t want to merely tell the story but piggyback so they are part of the story. It smacks me of narcissism.

I think there was a stronger dramatic dynamic with Young @ Heart than what Walker captures, and I think he misses this because he had lowered ambitions for the film simply to document the seven-week period of practice. Every now and then you’ll discover a moment that points to what Young @ Heart had the potential to become, but Walker’s intention is more along the lines at gushing at what geezers can do. I get that Walker feels affection for his subjects but couldn’t he have gone further than the old-people-sing-young-people-songs gimmick? Some times the film feels like it has as much depth as a prototypical behind-the-scenes featurette on a DVD.

Walker evenly divides the film between performances and interviews and he also doesn’t overdose on the pathos even after deaths hit the Young at Heart clan. The movie has several music videos where the old folks sing to songs like “Golden Years,” “I Wanna Be Sedated,” and “Stayin’ Alive.” As you can see, each song is given something of a twist. However, the music videos come across as cheesy and unnecessary since seeing the performers live would be more interesting and real. Including several music videos, of songs that we never see the chorus practice no less, seems like wasted time that could have been spent getting to know our cast of characters better. I’d rather better know them as people than laugh and giggle at them performing The Bee Gees at a bowling alley.

There are some chorus members that separate from the pack like 92-year-old Eileen Hall who used to be a burlesque dancer many moons ago. She’s the oldest in the film and yet in many ways has the most indomitable spirit, frequently cracking jokes and making suggestive statements that Walker deems to be “flirting.” Fred Knittle is a man who was told he’d have two years to live after suffering his latest heart attack. By the time he rejoins the chorus he’s at two years and four months and running. He ably steps into the solo spot to sing “Fix You” after the original singer passes away. The moment is so pure and emotional that it reminds you about the power of music in a non-saccharine way. One of the more interesting figures in the film is Bob Cilman, the music director of the Young at Heart chorus. Here is a man in his 50s teaching contemporary rock songs to the elderly, and yet the film never explores this man and his infinite patience. What are his reasons for doing the Young at Heart chorus? What does he think about his own life’s purpose? The movie would have strongly benefited by spending more time exploring the life of this man and his unique mission. I want to know what makes him tick.

My faults with the film do not fall upon the subjects. This batch of senior citizen rockers is a delightful group and watching them perform can be entertaining and occasionally inspiring. However, I cannot fully recommend it because its scope and interests are far too narrow given the subject matter. Director Walker would rather treat his senior subjects like they were posing for a calendar in adorable poses, and I’m glad he has such warm affection for these lively octogenarians. But his affection clouds his filmmaking judgment and Walker ignores plenty of palpable drama. The concluding concert will certainly produce smiles and some toe tapping, but this drama could have been so much more. I can honestly say that, beyond the communal experience, there is no reason to catch this movie in a theater. It will play the same on your TV screen. If only Walker had listened a little harder to his older subjects then maybe he would have realized that true wisdom does not come merely from a cute gimmick.

Posted on October 28, 2008, in 2008 Movies and tagged documentary, musical. Bookmark the permalink. Leave a comment.