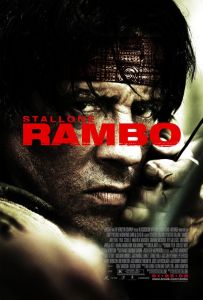 Count me as one of the many who were surprised at how effective Sylvester Stallone was when he dared to make a sixth Rocky movie. That 2006 swan song was an effective and somewhat emotional return for a character that had been dormant for over 15 years. Now Stallone is trying to work his resurrection magic yet again. Rambo was the epitome of the 1980s action star as he laid waste to vast stretches of enemy armies. What few remember is that Rambo’s first film, 1982’s First Blood, is actually more of a psychological drama about a Vietnam War veteran coping with adjusting to life back home. The action only comes at the end and a grand total of four people perish. Stallone had bigger plans for the character, I suppose. Just as he did with Rocky, Stallone has brought back an old character now with an older face.

John Rambo (Stallone) has been living outside the Burma (now known as Myanmar) border in Southeast Asia. He’s commissioned by a group of missionaries, including pretty blonde Sarah (Julie Benz), to transport them upriver into Burma. They want to do aid work, but Rambo says that Bibles cannot help a country overrun by men with guns. Eventually, all those Christian missionaries are kidnapped by a ruthless warlord. Rambo teams up with a group of mercenaries to go back and rescue them. A lot of people die horribly in the process.

Do we need another Rambo movie? The first one was linked to the Vietnam War, the increasingly cartoonish sequels involved John Rambo going back to Vietnam and then going to Afghanistan to help take out the invading Soviets. Perhaps the figure of Rambo should be added as a footnote to Charlie Wilson’s War. But the world has changed and the notion of a one-man army taking out the trash seems a tad ludicrous when a modern enemy isn’t a clear, identifiable source. Stallone wisely returns his scarred soldier to the jungle, back to where atrocities are going down in international lands. In some manner, Rambo becomes like a wishful force for justice, and instead of Vietnamese and Russian soldiers being shot out of jingoistic American glory, it’s Burmese military warlords that meet their makers. Stallone even opens the film with real archival footage of the Burma military junta committing violence acts. The bad guys feel real and relevant, which makes it partially more fulfilling when Rambo meets out his own brand of punishment. 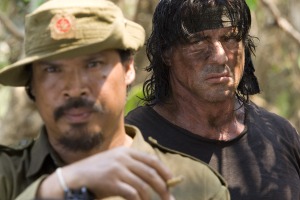 The dialogue is sparse and kept to an expository minimum. This is for good cause. Ladies and gentlemen, allow me to perfectly showcase for you why it is a blessing that Rambo is as dialogue-free as possible. This exchange happens early in the film and is a glimpse into the philosophical rumblings of one, John Rambo.

That’s the kind of dialogue you hear during fake audition scenes in movies, where the aspiring actors are saddled with ponderous drivel. There is some discussion over whether it is right to take a life. You get an idea of Stallone’s worldview when he has the pacifist preacher eventually kill his fellow man out of survival. After the twenty-five minute mark or so, Rambo essentially becomes a silent movie with added grunts.

The plot is as thin as possible; it’s essentially a rescue mission stretched to 90 minutes. Of course Rambo is a brutal and bloody action flick, but man is this thing tremendously gory, and it’s war gore so that means bodies being blown to bits. I’m somewhat awed at the sheer variety of ways bad guys have giant holes punched in them and through them. Limbs go flying, blood soaks the ground, heads go rolling, insides spend more time on the outside, and bodies are ripped apart. The blood and guts splatter the screen so much that sometimes even the camera can’t escape. There’s so much carnage that you may be advised to wear a poncho if you sit close to the screen. According to the Internet Movie Database, Rambo has 236 onscreen kills and that averages to 2.59 killings per minute. It’s a viscerally violent flick that can become occasionally entertaining, if you can stomach other people’s stomachs exploding in your face. In the end, though, the violence is just another bloodlust high that completely dissipates once the movie concludes, and you?re left with nothing of value. It’s somewhat fun while it lasts, but once it stops Rambo is an empty exercise. Then again, if you’re hungry for lean, mean action, and only action, then Rambo will certainly provide the gory goods. 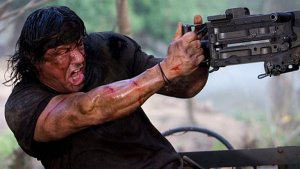 Stallone has somewhat re-energized his career by going back to the well. Rambo isn’t as nuanced as that big palooka Rocky, but the taciturn man of action suits Stallone. After a 20-year absence, Stallone eases back into the character and gives him a satisfying weariness, as solitary life has taken its toll. You won’t find me specifying the accomplished feats of acting in this movie because most of the acting is the equivalent of running and falling down, though perhaps not in one whole piece. Credit must be given to the 61-year-old Stallone, who still appears physically agile and spry when he could be cashing a Social Security check. Benz (TV’s Dexter, Saw 5) spends most of her time wailing through tears. It must have been exhausting for her tear ducts and her lungs.

Rambo is a movie that doesn’t pretend it’s anything but a grisly, masculine action flick. The story isn’t anything remotely involving and I doubt that Rambo was a character that needed to be reawakened. However, as a meaty old school action film, it aims to satisfy in the moment. Stallone does what he does well. It should be noted that the Myanmar military government has naturally banned this latest Rambo entry but rebel factions have actually used the film as a source to renew the spirits of the oppressed. They have even taken to using some of the dialogue as rallying cries. To think after all these years Rambo could still have an effect on the world. That’s more amazing than any of the creative carnage within the 90 minutes of Stallone’s rumble in the jungle.