Writers/directors Jason Friedberg and Aaron Seltzer couldn’t leave well enough alone. I had become accustomed to these two tainting the beginning of a new year with their deeply unfunny “spoof” movies. In February 2006, they released Date Movie, in January 2007, they released Epic Movie, and in January 2008, they released Meet the Spartans. One cinematic blight wasn’t enough for these two and so, on the third anniversary of Hurricane Katrina striking the Gulf Coast, these sultans of suck have unleashed the appropriately titled Disaster Movie.

I won’t even dignify this movie with a plot synopsis. To do so would acknowledge there was at any point a script. They even make fun of Oscar-winning Juno scribe Diablo Cody’s writing. That’s like George W. Bush mocking Barack Obama’s eloquence.

By pacing their horrible comedies a year apart, Friedberg and Seltzer at least have time to gauge what movies have become popular and what pop culture events have stuck in the public consciousness. But Disaster Movie was put on the fast track and was in production before many of the movies it deems worthy of attack were even released. As a result, it seems that the fail twins were watching trailers for upcoming movies and hedging their bets on what would be popular. This explains why they mention movies that made no cultural impact and flopped at the box-office, like Speed Racer and The Love Guru. Seriously, a “funny” reference to a bad Mike Myers movie months after it has opened and closed is, in itself, kind of humorous in how ridiculous and embarrassing this all is. Once again, Friedberg and Seltzer have assembled a highly disposable pop-culture yearbook except this time they took bets on what would be meaningful. Is anyone going to even get a reference to Jumper? How about in a few more months? Yet again Friedberg and Seltzer have assembled a movie that has a built-in expiration date. 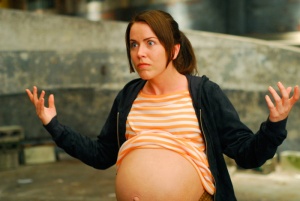 As expected, Friedberg and Seltzer apply their shallow level of comedy to the movies caught in their crosshairs. These guys simply don’t understand the difference between reference and parody, and once again they deluge an audience with cheap references to other movies and the reference is designed to be the joke. Just having a character appear as the Hulk isn’t funny. Having a character appear as the Amy Adams character from Enchanted isn’t funny. Friedberg and Seltzer don’t even mock the disaster movies befitting its title, like The Towering Inferno, The Poseidon Adventure, or the more recent Day After Tomorrow. The only partially relevant movie they make reference to is Twister because it affords them the opportunity to drop cows on characters (if it’s not funny once, it’s not funny the thousandth time). Disaster Movie cycles through a mix of movies from the fall of 2007 to last summer, including Juno, 10,000 B.C. (a film worthy of parody by smarter people), No Country for Old Men, Sex and the City, Superbad, Beowulf, Wanted, Indiana Jones and the Kingdom of the Crystal Skull, Prince Caspian (another movie that faded quickly), and others. Friedberg and Seltzer mix in attacks on pop culture figures like Jessica Simpson and Amy Winehouse, simplifying each to a one-joke premise (Amy Winehouse is drunk, never heard that one before). But wait; to prove how in touch they are, Friedberg and Seltzer have used their SECOND SPOOF MOVIE OF THIS YEAR to include jokes about Michael Jackson being a pedophile. Oh my good graces, how do these guys come up with such cutting-edge and timely material in the year 2008?

You want to know how truly terrible Friedberg and Seltzer are as filmmakers? Disaster Movie is the film debut of socialite and tabloid queen Kim Kardashian. This woman is known for one thing and that thing is her thang, namely her posterior. Friedberg and Seltzer fail to make even a single joke about Kardashian’s notable assets. Not only that, from a pure exploitation angle, they even fail to take advantage of Kardashian as a sex object.

To honor Friedberg and Seltzer recycling the same garbage and calling it by a different name, I will stop writing about their newest example of cinematic ineptitude and simply copy and paste sections of my review for this year’s Meet the Spartans. Enjoy my attempt at Mad Libs style film criticism.

“Writer/directors Jason Friedberg and Aaron Seltzer are, and I do not say this lightly, the worst filmmakers of all time. They are worse than Ed Wood, they are worse than Uwe Boll, they are worse than Harold P. Warren, who wrote and directed the worst movie of all time, Manos: The Hands of Fate, because of a bet that he couldn’t make a movie (I’m fairly certain he still lost). Friedberg and Seltzer are the antithesis to funny. They mock funny, they spit at funny. [DISASTER MOVIE] is their [FOURTH] spoof in three years, or, as I see it, their [FOURTH] miscarriage of comedy.

[DISASTER MOVIE] would be hard-pressed to fit the definition of a movie, no matter how generous you are with the term. True, it is a collection of moving pictures, but surely we must have greater stipulations for our movie going entertainment. The actual flick is only [75] minutes long, barely a little over an hour, and then it’s crammed with 15 minutes of outtakes and needless extra scenes to be strewn over the credits [INCLUDING AN ALREADY PAINFULLY DATED PARODY OF SARAH SILVERMAN’S SONG “I’M F***ING MATT DMAON,” ALTERED TO PG-13 FRIENDLY LYRICS ABOUT “DATING” MATT DAMON]. I should be more upset by the total transparent laziness to even construct a film of suitable length, but every minute I was spared more of this junk was an act of divine mercy.

Friedberg and Seltzer are not filmmakers but regurgiatators, wildly lampooning anything that they feel approaches their young teen male demographic. [DISASTER MOVIE], like Epic Movie and Date Movie, cannot be classified as a “spoof” because all the film is doing is setting up references and the references are supposed to be the joke. The film is like a meaningless and random scrapbook for the year in pop culture; the film’s only function to pacify total idiots with attention-deprivation issues.

And yet, astoundingly, the movie still feels like it needs to set up its dumb, obvious gags. The film has one [PERSON] point off screen and say, “Look, it’s [HANNAH MONTANA],” and then we cut to [HANNAH MONTANA CRUSHED BY A ROCK]. Why did Friedberg and Seltzer feel the need to name check?  It happens again when [A CHARACTER POINTS AND SAYS, “HEY, IT’S ALVIN AND THE CHIPMUNKS”]. I don’t need a handicap for non-obscure pop culture bon mots.

From a production standpoint, this movie looks really cheap. The sets and costumes and props look horrible, like something a high school production would ditch. Just because it reuses the same camera setups as [ANY MOVIE] doesn’t mean it gets any closer to parody. For God’s sake, they couldn’t even come up with puns on character names.

The actors all seem mildly embarrassed and they do nothing with their roles. It’s not their fault the material sucks so deeply, however, it is Electra’s fault for appearing in her [FOURTH!] straight Friedberg-Seltzer spoof fest. The key to a good spoof is to play the damn thing straight. It’s annoying and redundant if the film keeps winking back at the audience.

[DISASTER MOVIE] is pop culture vomit. No, this is worse, this is cinematic diarrhea. It’s watery pop culture discharge masquerading as entertainment. This movie if offensive to anyone that appreciates laughter. This film and its ilk are offensive to mankind. And plus, it’s just not funny people, not in the slightest. There’s no wit here, no comedic payoffs, no running gags (besides gay jokes [AND COWS FALLING ON PEOPLE, HE HE HE]), no thought or upheaval of convention; instead, this movie is a lazy, cheap catalogue of pop culture events. Even at [90] minutes (really it’s [75]) this thing drags and feels exhausted long before it bows out. Just as I said in my review of Epic Movie, Friedberg and Seltzer must be stopped at all costs if comedy is to survive.”

In short, don’t see it and punch anyone in the face that ever thinks of seeing Disaster Movie.