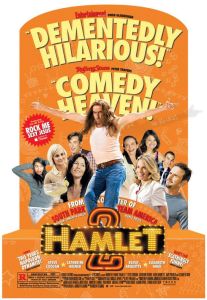 Believe it or not, there actually is a sequel out there about William Shakespeare’s most famous play concerning family dysfunction. Author David Bergantino surely doesn’t feel that he can improve upon the Bard’s classic Hamlet, but Bergantino is a writer who doesn’t cower from a challenge, like where to go next when all the main characters are dead. That’s why Bergantino took it upon himself to write Hamlet II: Ophelia’s Revenge (no joke). Apparently modern students at Globe University are playing out a family squabble very similar to anyone that has taken a high school literature class. The synopsis over at Amazon.com says it better than I could ever hope:

“When he unexpectedly inherits a creepy old castle in Denmark, Cameron tries to put his worries behind him, inviting his girlfriend and college buddies along on an overseas trip to check out the gloomy fortress. The plan is to get some serious partying done. Too bad nobody counted on the ghost of a drowned girl rising from her watery grave with vengeance on her mind! Now the only question is: to die or not to die?”

In the wake of Hamlet 2, a popular comedy at the Sundance Film Festival, I pity Bergantino. The man is going to be the Leif Ericson of pointless Shakespeare sequels: forgotten by history at the original pioneer. The film Hamlet 2 follows the miserable life of Dana Marschz (Steve Coogan). He teaches drama at a Tucson, Arizona public school and barely gets paid. His wife (Catherine Keener) is anxious to get pregnant and convinced Dana is shooting blanks. The couple is so poor that they have to rent out their home to a boarder (David Arquette). His drama class has two very WASP-y pupils (Phoebe Strole and Skyler Astin), but the rest are disinterested Hispanic students bused in from another school district. The school’s theater critic chides Dana’s laughable productions of Hollywood movies, like Mississippi Burning and Erin Brocovich. Then comes the news that drama has been slashed from the school budget. The pint-sized theater critic tells Dana to try something original to save the drama department. The answer? Hamlet 2. Thanks to a time machine, and Hamlet’s new best buddy Jesus Christ, the pair can go back and save everyone who previously perished.

Hamlet 2 is Coogan’s show and the British comic makes his character endearing sad-sack. His character is pathetic and subject to all sorts of personal humiliations, and yet Dana is so earnest that it makes it hard not to empathize with his exploits. Coogan has a wild leer to him that gives the character a manic edge of desperation. He’s a gifted comic but he’s used to playing smug, droll characters, and Dana Marschz is the exact opposite of that mold. Coogan’s many breakdowns and bouncy spirit give the material an extra lift. He works hard for every laugh. It’s a shame, though, that he sort of disappears into the background during the staging of his infamous play.

So what is the comedic point of view with Hamlet 2? Are we to laugh at Dana and find him a buffoon? Well if that’s the case, then why serve up a musical finale that’s actually worthwhile and completely hilarious? The production values are pretty extravagant given the money limitations on the characters. Not only that, it’s so bonkers that I wanted to just watch Hamlet 2 on stage and not cut back to life outside. I wanted to luxuriate in the inspired craziness of a musical that involves time travel, Shakespeare, Albert Einstein, the song “Raped in the Face,” the devil, the Gay Men’s Chorus, lots of father issues, and Jesus moonwalking over water. That’s way more interesting than the ho-hum characters interacting backstage. In truth, the play’s the thing and it’s way too short for my liking. The performance serves as the film’s payoff, so I wanted to get every crazy kernel of shameless joy. The “Rock Me Sexy Jesus” song is irresistible and I haven’t been able to get it out of my head for days. It’s so bouncy and fun and melodic. I’ll be walking along and then I’ll start humming the damn thing. I doubt that I will come across a catchier original song in movie this year. Hopefully those bigwigs in the Academy will realize the tune’s musical merits and give it a nomination it rightfully deserves.

Then is Hamlet 2 a parody of all those treacly teacher inspiration movies, the kind that seem to always be populated by tough minority kids who just need someone to take the time and break through to them? Well Dana constantly refers to Hollywood movies like they’re documentaries, and even a whole class lecture concerns Dangerous Minds. When he accidentally injures a student, Dana jumps at his students being alert and offers in summation, “Yes it was stupid but it was theater.” The movie takes some shots against the likes of Dead Poet’s Society and Mr. Holland’s Opus, but ultimately Hamlet 2 becomes yet another inspirational teacher movie. Dana is able to rally his students to the cause of theater, prejudices are broken down, and certain students take charge of their young lives. It’s all so predictable, and predictability blunts edginess and can destroy comedy. The only true genre tweak seems to come when standoffish Octavio’s background comes to light. He’s not the underprivileged wannabe gangster but a bright kid whose been admitted to an Ivy League school early. And his parents don’t object to the play because of “ethnic narrow-mindness” but because they think it’s poorly written.

Like Dana’s students, the film never seems to match its potential. The concept is great and so is having a main character who is inspired by theater but profoundly inept at teaching it. Dana lacks talent but can it be made up for with such big-hearted enthusiasm? There is plenty of ripe material there, but Hamlet 2 doesn’t seem to fully realize the comedic possibilities. Watching Dana fight administration officials in the name of the arts is worthwhile conflict but it’s rarely funny. Keener seems wasted as Dana’s passive-aggressive wife. An ACLU lawyer (Amy Poehler) is a great political target, especially as she fights in the name of bad art, but she appears too late in the film to be really capitalized. The climactic staging of Dana’s masterwork is another example of not fully thinking out the comic potential of a situation.

Here’s a perfect example: Elisabeth Shue appears in the film as herself, actress Elisabeth Shue. She’s quit the acting business and taken residence as a nurse in Tucson. What exactly is the joke here? Is it that Hollywood has the habit of spitting out aging actresses? Dana’s students have no idea who Shue is. Is it self-parody? If it was self-parody then the filmmakers needed to give Shue more of a personality. She’s appears infrequently and beams a nice smile but that seems like the only demand, though I must admit always in her nurse outfit, a nice visual gag. If Hamlet 2 had spent more time in revision it would utilize the comic possibilities of integrating a real-life actress playing herself in such a remote city.

Ultimately, I don’t know what to make out of Hamlet 2. It’s a marginally funny and entertaining venture that celebrates the power of the arts, which is a noble cause. Coogan straps the production on his back and carries it as far as he can go. There are some decent laughs and the closing 15 minutes is a giddy blast. However, the movie often feels flat and simply odd, missing potential punchlines and settling for second-rate comedic situations. The crafty premise afforded better material then what eventually comes across onscreen. The whole thing also feels like a mild retread of Waiting for Guffman. But take heart, because Bergantino is not about to lose the spotlight just yet. He also has written A Midsummer Night’s Scream: Hamlet II (I have no idea where the two stories connect but that’s the genius of it). It’s only a penny at Amazon.com. Get it while you can. Or don’t. Preferably, don’t.