A lady told me that the Sex and the City movie is like “the Super Bowl for women,” and I couldn’t agree more, especially with the way box office receipts are already shaping up. The smash TV show seemed to become its own brand, launching designer duds and trinkets into the mainstream for single women. I willingly saw the Sex and the City movie with my wife on opening night, and I must say it’s an interesting experience to watch the film with a packed house of estrogen. The woman next to me was on a roller coaster ride of gasps and tears, at once passing out tissue to others that she had planned ahead to bring. I was never much of a fan of the show. I found the humor to be pretty lazy and the characters to be somewhat annoying after so many episodes; truth be told, I think I can only watch three before having to walk away. I open this review detailing my biases but with that said, four years after the TV show’s finale, the Sex and the City movie feels like a deflated after party.

Carrie Bradshaw (Sarah Jessica Parker) is planning her life with her beau, Mr. Big (Chris Noth). They find a swanky Fifth Avenue apartment and he buys it for her, then she feels jitters about what might happen if they break up and she’s homeless. Naturally, this causes them to get engaged. Of course something goes wrong before the “I do’s” and Carrie must pick up the pieces of her life.

She has her three friends to reach out to. Career girl Miranda (Cynthia Nixon) is living with her husband Steve (David Eigenberg) and their son. She and Steve have had quite a dry spell when it comes to sex, and one day he strays and cheats on her. She feels violated and she immediately moves out. She won’t listen to Steve’s apologies. Charlotte (Kristin Davis) is happy with her husband and adopted Asian daughter. That’s really about it for her. Samantha (Kim Cattrall) is living out in L.A. managing her boyfriend, the hot actor Smith (Jason Lewis). She feels isolated and misses New York City. She also feels somewhat like a cat without her claws, as her sexy neighbor presents quite the temptation.

Writer/director Michael Patrick King seems to have condensed an entire season into a movie. It feels like eight episodes packed together but with little central momentum to provide some form of cohesion. There’s no larger scope, not meat to this story, but King feels like he has a checklist of female “events”. So we get weddings, canceled weddings, fashion shoots, pregnancies, and lots and lots of shopping. Sex and the City ends up transforming into hard-core consumerist, female wish fulfillment pornography. The film is heavy with subplots and many of them feel like retreads that the TV show would have already covered and recovered after six seasons. The movie feels overly melodramatic and it isn’t much fun. Carrie spends most of the film moping and heartbroken; she spends a Mexican vacation intended to be her honeymoon in bed. Samantha has to spoon-feed her in order to get her to finally eat something. For some this will come across as moving and heartwarming, but for me it came across as pathetic. King’s idea of comedy doesn’t help. The jokes are pun-heavy and corny, and most sound like they should be followed by someone saying, “Badum dum dum, yeah.” When a film has to resort to a dog humping things over and over you know it has issues.

The movie medium is not the ideal place for these ladies. In half hour doses they come across better, but when blown up to a gargantuan 145-minute length, they become self-absorbed and vapid stereotypes. I didn’t like any of the characters. Perhaps you will. The characters come across as whiny, insecure, and pretty myopic. Miranda holds onto her self-righteous vigor about refusing to forgive her insanely ingratiating husband’s one-time affair yet she holds onto the guilt that her spur-of-the-moment comment doomed Carrie’s wedding. She doesn’t tell her friend about what she said, encouraged by Charlotte to button up out of kindness. In turn, Carrie doesn’t tell Miranda what a mistake it was to make a clean break from Steve after he cheated once. Carrie does this out of kindness to their friendship. They are prolonging each other’s misery. And later Samantha returns with an extra 15 pounds in tow thanks to her constant eating to douse her impulses to cheat. The gals react with such shocked expressions it becomes uncomfortably mean. 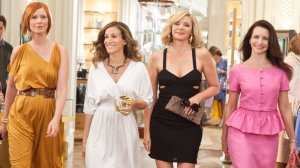 Jennifer Hudson shows up after the hour mark to become Carrie’s new assistant, and she serves as a saintly reminder of how optimistic and buoyant love can be. The character is a total waste and seems tacked on to a story desperately searching for fertile narrative ground. Apparently with oodles of free time Carrie needs someone to check her e-mail for her. I don’t understand why any one of the girls couldn’t have filled this role; it would draw the characters closer together and make the movie shorter. In fact, Charlotte is given shamefully little to do in the film. Her biggest concern is how perfect her life is. Her 4-year-old child (she’s overly meek and barely speaks a word, they might want to have that looked into) is nothing but a prop. She appears in scenes of the girls talking, or shopping, or talking about shopping, but rarely if ever do we see Charlotte dealing with motherhood. Her character’s biggest moment onscreen is crapping her pants. Yes, you read that right.

The rampant consumerism is depressing, especially at such a bloated running time. I’m not going to charge the film with setting back feminism or anything but why do the main characters have to be so shallow, brand-conscious, and live to splurge? The emphasis on buy, buy, buy to make yourself feel good is a rather sad and empty message. I get that the TV show and the movie are supposed to tap into a woman’s fantasy, and the film really panders to Carrie’s princess indulgences and demands. So of course we’re going to get several montages of fashion and shopping and gads of product placement overkill. Seriously, the Sex and the City folk must be pocketing some major dough from all the fawning recommendations they make over brand names (History fact: Louis Vuitton died in 1892). But here’s the thing — the clothes don’t even look good! The difference between designer fashion and complete clownish garbs is practically nonexistent. The outfits these women wear are horrendously garish and bizarrely impractical even for high-end New York career women (high heels on NYC streets?). I’m stunned by the idea that the fashion that these characters wear is deemed glamorous.

The movie didn’t have to be this clunky. The men are all relegated to the sidelines for giant portions of the film, only to show up and act penitent or selfish. The film’s conclusion, where Carrie and Mr. Big reconcile, looks like it might take its own advice and “write its own rules” but then it ends blandly predictable. Sex and the City could have explored the interesting dynamic of four women well into their 40s and how they navigate the waters of relationships and carnal cravings. Samantha herself turns 50 during the course of the movie and, let’s face it, she has probably gone through or is about to experience menopause. Samantha was always the most promiscuous character, so wouldn’t that be an interesting conflict and feel a bit more realistic? Then again, realism isn’t exactly what Sex and the City is about. If it were there would be no way that Carrie’s terrible, platitude-riddled writing would spawn three best-selling books.

Fans of the Sex and the City TV show will likely enjoy the big screen version of their favorite gal pals. After six seasons, I suppose a 2 hour 25-minute movie won’t feel long enough for the die-hards with their cosmos at hand. I am admittedly not a fan of the show, and the movie comes across as long, draggy, aggressively shallow and a tad disingenuous. The actors mug hard, which looks bad when it’s blown up to fit a movie screen. The jokes are pretty stale and the plot spirals into too many subplots. I don’t really want to spend another 145 minutes with these women, especially if this is how they’re aging and maturing. Don’t say I didn’t warn you.