Robert Downey Jr. and Jon Favreau seem like decidedly odd choices for a studio to hand over a multi-million dollar potential comic franchise. Iron Man certainly isn’t one of the better-known super hero properties but Marvel Studios felt confident that having Favreau behind the lens and Downey Jr. in a heavy suit of armor was the right direction. They couldn’t have been more right. Iron Man is a rock solid action vehicle that flies by in a blast. My biggest complaint: the film never utilizes the ready-made theme song by Black Sabbath.

Tony Stark (Downey Jr.) is the billionaire CEO of Stark Industries, a high-grade weapons manufacturer creating bigger and better ways for people to kill each other. His life is a never-ending party, going from gambling to girls to gizmos. His assistant, Pepper Potts (Gwyneth Paltrow), keeps Stark as grounded as he can be. Stark is traveling to Afghanistan to demonstrate the awesome might of some of his new missiles when his convoy is ambushed. One of Stark’s own weapons sends shrapnel into his chest. He is kidnapped by terrorists (read: Arabs with guns) and held captive inside a cave. Stark is kept alive by a glowing electromagnet do-dad in his chest that manages to keep the shrapnel from entering his heart. Raza (Faran Tahir) orders Stark to build him a missile or else. So Stark does what any mechanical boy genius would do: he builds a giant suit of armor and busts his way out.

Stark’s friend Jim Rhodes (Terrence Howard), an Air Force officer, rescues him in the desert. Once back at home in his Malibu mansion, Stark has a personal epiphany. After seeing the human damage his weapons cause he no longer wants to manufacture weapons. His business partner Obadiah Stane (Jeff Bridges) and the board of directors are not interested in Stark’s revision. They want to keep doing what they do, making weapons for the highest bidder. Stark begins building a more advanced mechanical suit based upon the prototype from Afghanistan. He will use his technical expertise and great fortune to destroy his own weapons, even if he has to become an ironclad superhero to do so.

Downey Jr. is Iron Man, yes, but he IS Iron Man. He makes this character, this movie, and serves as the film’s ambassador to an audience that has grown tired of mopey teenagers imbued with super powers. His character is a man going through a mid-life crisis of sorts, reevaluating his life and trying to find meaning in his work. There’s something satisfying about watching an older adult wreck of a man taking on a genre that feels like it’ stuck in a high school atmosphere. Downey Jr. is a fantastically engaging, talented actor and when he turns on his narcissistic quick-witted charm it is impossible not to be won over. He provides the film with a tremendous spark and manages to make a womanizing, alcohol-swilling, super wealthy arms peddler/playboy into a figure of sympathy and a hero for the masses. Downey Jr. has expert comic timing and makes Tony Stark a cool swinging superhero. Just listen to his line deliveries and the energy and pacing he puts into the dialogue; it’s terrific. He also gives Stark the necessary drama to pull off the weight of guilt.

Iron Man is also a victory for Favreau as a director. The Swingers star has become a stealthily competent director. He helmed 2003’s Elf and 2005’s underappreciated Zathura and I suppose Marvel Studios saw what I saw in those films. The direction is focused and he makes smart decisions, never overwhelming an audience and always centered closely to the story. Favreau is more concerned with storytelling than noisy, empty special effects. Hell, Iron Man doesn’t even enter the film until an hour into it. There is a confidence and patience to his direction; it manages to convince an audience that they will be rewarded for their time.

Favreau doesn’t pander and knows well enough that practical special effects will inspire the greatest sense of awe in a summer flick. Iron Man‘s special effects are almost seamless from the practical to CGI. I enjoy popcorn action movies so much more when I’m not nit-picking the special effects. This isn’t a slam on CGI itself, but computer effects have the tendency to declare their fakeness. Sure the special effects were amazing in last summer’s Transformers (how it lost the visual effects Oscar to the subpar Golden Compass I’ll never know), but the CGI-ness of it could be overpowering. When I cannot decipher a special effect automatically, then I know I have been fully immersed in the action. Favreau smartly lays out a bevy of nifty practical effects for the first half. By the time he transitions to broader CGI then he’s already laid the foundation for realism.

Favreau isn’t the best action director but this only presents an issue in the film’s last act. The action sequences in Iron Man take a back seat to watching Tony Stark piece together his new life. I was more interested in seeing Stark test and reconfigure his designs. The construction of Iron Man, to me, is more intriguing than seeing a man in an iron suit battle some guy in a bigger iron suit. The fun is watching him become Iron Man. The action sequences are serviceably kick-ass but too short. I loved watching Iron Man punch people and seeing their bodies fly backwards. Even at over two hours there just isn’t a whole lot of traditional action to Iron Man but this suited my tastes. I’d rather watch an actor with Downey’s talent interact with an A-list cast than watch robots fight and smash personal property.

Iron Man is aided by a strong script credited to two of the writers of Children of Men. It’s structured as an origin tale but it takes its time to set up events and characters that will have lasting meaning. Stark confronts being a weapons manufacturer in a post-9/11 world. He finally stops and asks, “What is the cost?” His own company is double dipping, selling weapons to both sides in a conflict, weapons that will kill U.S. men and women pledged to protect America. Stark has a true change of heart, both figuratively and, later, literally with the assistance of Pepper. There’s a political undercurrent to the film’s drama that manages to be timely and provide at least some thought to go along with the popcorn thrills. Iron Man finds a way to force its characters to combat real moral questions that result from their actions. 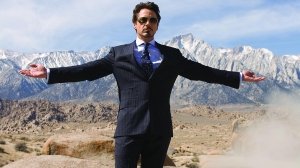 The supporting cast has a combined seven Oscar nominations for acting, so this is a step above the acting level of a Fantastic Four. Howard is mostly underwritten but he provides a nice sense of camaraderie with his friendship with Stark. Bridges is an obvious villain just from the first sight of his bald dome and big, bushy beard. He’s got a mean scowl but Bridges provides a warm and fatherly guide for Stark. But man, when he gets menacing he is rather scary. But my highest praise in the supporting work goes to Paltrow, who coolly delivers arch snappy one-liners in a retro do-everything secretary role. And yet the role also offers some reflection, like after dancing in public with her boss she worries over gossip and what perception will construe the moment into. She, his employee, wearing a plunging backline dress that looks gorgeous on the actress, dances with her boss, an infamous womanizer. And then in this moment of doubt there’s a nice, unexpected moment for both a comic book movie and a would-be romance, and the “would-be” is the correct term. She has great chemistry with Downey Jr. and watching the two of them playfully bicker is another reason Iron Man soars above the confines of genre and formula. Plus she looks great with red hair.

Iron Man is a great start to the summer movie season and will be hard to beat. It doesn’t have the psychological depth of Batman Begins or the high-flying fun of Spider-Man 2, but this film certainly deserves to be mentioned in that same group. Favreau has crafted a respectful comic book movie that manages to place special effects in service of an interesting story played by extremely engaging actors. Downey Jr. is the movie’s secret weapon and he delivers a smart, witty, charming, sardonic and enormously entertaining performance that anchors a fine example of what big budget popcorn filmmaking done right looks like. Batman and Spider-Man might want to be on the look out because the new kid on the block is generating some serious heat.