“I don’t want to be a product of my environment,” growls Frank Costello (Jack Nicholson) in the opening seconds of The Departed. “I want my environment to be a product of me.” Without question, the filmmaker that has shaped the environment of movies more than any other in the last 30 years is Martin Scorsese. No one does the cops-and-robbers territory better than Scorsese, and it’s great to have him back on familiar turf. It’s not that Gangs of New York and The Aviator were lacking in directorial skill, it’s just that they felt so labored and reeking of classy awards envy. With The Departed, it all feels so artistically effortless, like Scorsese settled in a zone of brilliant filmmaking. I just hope Marty bangs out more of these excellent gangster flicks before trying again to woo Oscar. In fact, his return to his violent stomping grounds might finally be his long-overdue ticket to the winner’s circle.

The premise is appealingly simple. The Boston State Police Department is desperate to nail local crime lord Costello. They pluck a young recruit, William Costigan (Leonardo DiCaprio), who has a shady family history of small-time crooks. He agrees to infiltrate Costello’s mob and report back to the Boston PD. To make is situation credible, Costigan is expelled from the force and sent to prison to earn a rep. Only two other people know Cosigan’s real identity, the police chief (Martin Sheen) and the head of undercover work (Mark Wahlberg). On the other side of the law, Costello has a mole all his own working inside the Boston State police force. Colin Sullivan (Matt Damon) has quickly risen through the ranks and has a prime position working with the state?s FBI crack force. He’s also an acolyte of Costello’s ever since he was a young Southie kid seeing the draw of power. Now full grown, Sullivan tips Costello and tries to redirect the ongoing investigation to bring the man to justice. 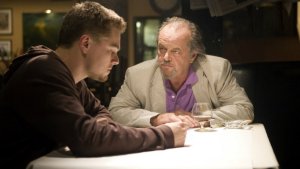 The real sparks come when both moles try to discover the identity of the other, without compromising their own precarious identities.

The Departed is a bruising, bristling return to form for Martin Scorsese and his most entertaining film since his last Great Movie, 1990’s gangster-rific Goodfellas. This is a movie that crams multiple characters, storylines, and histories into one tight, focused setting, but then the flick glides smoothly on electric storytelling and intense performances. The movie’s twists and turns are, at times, of a knockout variety, and there’s a stretch of late surprises that each feels like a shot to the gut. I was possibly winded from gasping so hard. This is a film so fantastically alive with feeling and vigor that you cannot help but get ensnared. It sets up all the players and back-story before we even get the opening titles set to the blaring wails of the Dropkick Murphies. The thrills are real because we feel the danger, and the onslaught of brutal violence is another rhythmic piece in Scorsese’s masterful conduction. Adding to the feeling is the sure-handed, quick-fire editing of longtime Scorsese collaborator Thelma Schoonmaker and the ominous cinematography of Michael Ballhaus. Even though this film is based on a 2002 Hong Kong film, Scorsese has firmly made The Departed a movie all its own in spirit and personality. No one so easily brings us into the sordid lives of criminals better than this man, who, when in that creative zone of his, brings such palpable energy to his melding of image, song, and consequence, that the results are simply intoxicating. The Departed reminds you why Scorsese is still our greatest living director, no matter what Oscar thinks.

What elevates The Departed from the clutter of other macho men-with-guns crime capers is its studious attention to character. This is a film that works beyond a concept. The movie’s central moral theme is the price of identity. Frank opens the film asking what does it matter who’s holding the gun to your head, cop or crook. Costigan is tormented from wearing too many faces. He’s having trouble justifying his deeds and actions and is scared he may lose his own soul at the price of his lost identity. Sullivan, on the other hand, has gladly sold his own soul for a pittance. He’s a class conscience yuppie that craves power and will cut any throat if it gets him ahead. The movie steamrolls ahead with intrigue but it’s our connections to these characters that elevate the life-and-death stakes. You have a real emotional investment in this story, therefore when things get murky you really feel the danger. My heart was racing with excitement and dread. There may still be impressions from where I was squeezing the movie chair.

Complimenting these complex characters are brilliant performances. DiCaprio may have been nominated for a Best Actor Oscar for his second Scorsese collaboration, The Aviator, but he turns in his strongest work here. DiCaprio expertly bares a gnawing moral conflict with equal parts desperation and the hunger to do good. He’s trying to finally do right and step out of his family’s criminal past, and DiCaprio brings sharp intensity to this plight. You really feel every stomach churn this guy goes through to do what he does and stay alive. I knocked the boy for being too boyish a gangster in Gangs of New York, and let me say I take back my words. On the flip side, Damon utilizes his angelic, choirboy good looks and masterfully downplays his character’s pragmatic villainy. The character has to hide so much from the outside world, be it the police, his true bosses, his girlfriend, and even himself. Damon goes about his deceitful business with slickly sick ease, tapping a killer’s instinct for self-preservation. You may shudder from how methodically cold and manipulative he comes across. He’s a mesmerizing rat bastard of a human being and yet Damon presents an almost seductive portrait of evil.

Nicholson is equally good though at times can be a distraction to the storytelling. There are a handful of moments where Nicholson seems to go too far off the page, indulging his crazier tendencies. Costello is supposed to be a scary, unpredictable, potentially unhinged man, and Scorsese has plenty of moments that bring home this point. It just feels inappropriate then for Nicholson to, in a few small moments, transform into a goofy cartoon. With that said, it’s great to see Nicholson cracking some heads for Scorsese. He has devilish fun and is insanely watchable while definitely going for broke. After some nice guy roles it’s nice to have back an unrestrained Nicholson to play the film’s abyss of evil.

The collected supporting players all leave some mark. Baldwin and Wahlerg are perfectly profane hardass characters that you warm up to. Sheen, free from the Oval Office, displays nice touches of weariness and, in one moment, practically breaks my heart with his brave resignation. Breaking up this boy’s club is Vera Farmiga (Running Scared) as a somewhat contrived plot point to connect Costigan and Sullivan as the police shrink to one and the girlfriend to the other. There’s a perceived sadness to her willowy eyes and slender face that she plays to great effect. She?s a captivating new face and gives an extra ladling of emotion to the tale.

It’s been over a week since I’ve seen the movie and I still can’t get it out of my head. There are only a handful of flaws that separates The Departed from Scorsese’s rich pantheon of mythically Great Movies. This is a complex, gritty, amazing crime thriller stuffed to the gills with entertainment. Making the bloody body count resonate are the incredibly intense performances, particularly Damon and DiCaprio. This is a gripping gangster thriller pumping with the blood of a sterling character piece. The unexpected twists and turns will shake you, and the movie goes well beyond a snappy premise. The Departed is a moviegoing experience that will thrill you, stir you, sadden you, exhilarate you, and firmly plant itself in your memory banks. Welcome back Marty.