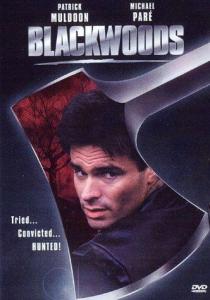 Blackwoods is Uwe Boll’s second English-speaking film. The video’s box advertises the film as a modern Most Dangerous Game with the befuddled Patrick Muldoon as the prey. This got me thinking about what it would be like if society allowed the recreational hunting of untalented actors. I think it could be a big moneymaker. I’ve already started talking with some investors and things look very promising.

Matt (Muldoon) is a smooth playboy from the big city. He’s off to travel with his girlfriend, Dawn (Keegan Conner Tracy), to meet her parents. Dawn grew up in a very small town well off the beaten path. This requires a trip through the Blackwoods, what she calls the hard-to-see forested area when night hits. The lovebirds get a good talking to about excessive speeds by the town’s sheriff (Michael Paré), who finds Matt curiously familiar. They shack up at a seedy motel run by a seedy owner (Clint Howard). After some vigorous time between the sheets, Dawn goes off to the bathroom to freshen up. Matt is tormented by visions he cannot quite place but they involve something to do with a car accident. He wakes up to find Dawn has disappeared. On top of all this, a man with an axe breaks into the room. Matt fends him off and goes looking for what happened to his sweetheart. No one seems to believe him. Then he finds a decrepit house out in the woods. He gets knocked out and locked in the basement. Inside, Matt is put on trial for murder by a local family, who plan to become hillbilly judge and jury. And when they badger the witness, they really badger the witness.

Blackwoods almost stumbles accidentally into being an interesting film. The premise of hillbilly justice on the big city folk would make for a good horror movie, no question. I mean, for decades horror movies have been preaching the dangers of small rural towns and their inhabitants. Boll has found himself a fitting premise for a horror movie. But Boll and co-writer Robert Dean Klein aren’t interested in making a horror movie; they want to make Blackwoods into a psychological thriller. They want something more. It’s these pathetic gasps for cleverness that doom Blackwoods. The eleventh hour twists Boll and Klein pack feel contrived and uninspired (the very end shamelessly rips off Final Destination). The ending twist, designed to tie everything together, raises far more questions than answers. You’ll probably be able to see it coming a mile away. Sometimes simpler is the way to go, fellas.

It’s hard to feel for Matt when he’s such an arrogant dope. There are two standout moments that reflect how stupid Matt is. The first is after Dawn goes missing in his motel room. Matt is baffled and tries to work it all out in a bathroom, as most men do. His room is then broken into by an axe-wielding intruder. Matt manages to hide and avoid him. Minutes later, the axe-wielding intruder returns and the two get into a brawl. Matt wins and the intruder runs away again. After this ruckus, Matt lays down on the motel bed and goes to sleep. He dozes off in a room that has been broken into twice by a man with an axe! The second incident happens late in the film as two hillbilly brothers chase Matt through the Blackwoods. One of the brothers has a gun and the other more sporting brother has a bow and arrow. Matt kills the brother with the gun and takes his weapon. Suddenly an arrow zips over his head and sticks in the tree. Behind him is the other brother, and even though this brother is currently unarmed and at a distance, he convinces Matt to drop his pistol. The ending twist only adds more fresh accounts of Matt’s idiocy.

Boll uses a heavy amount of blur-technique for very long stretches of time. Very long. An entire sex scene is blurrified into submission. Boll tries juicing up action sequences by adding the blur effect, which only infuriates an audience already sick of it. The effect is arbitrary and unwelcome. Boll has confused shaking the camera with artistry. Shaking the camera does not equal art, no matter how many notes you take while watching The Blair Witch Project. The stylistic choices Boll makes as a director seem so self-consciously motivated to goose up a limp story.

Blackwoods falls apart because it’s clueless when it comes to plot structure and mood. Boll isn’t one for trusting an audience to pick up his clues. Oh no, he’ll aggressively make sure you get every hint that something is important. When Matt grabs a knife we get an extra special close-up of it followed by a crescendo of music. Boll is shouting the importance of this item. And the funny thing is the knife isn’t even important. The same crescendo happens when a waitress gives Matt the stink-eye, and when Dawn takes a post-coital walk to the motel bathroom. We should pay attention to these things, Boll screams in our ears. Later, Matt assures Drew that “thing’s will be fine.” Cut to blurry image! Matt says, “My mom never let me do things on my own.” Cut to blurry image! Someone says, “You’re paranoid about something, though I don’t know what.” Cut to more blurry images! Because of the back and forth structure, Boll serves up a witless Cliff Notes of important plot points he wants to underline. Blackwoods kills any surprise it could have generated because of these superfluous cuts meant to engender a sense of foreboding. There’s a difference between feeling something will happen and knowing, and Boll’s ham-fisted plot structure and direction drain the film of any involvement. You can’t be mysterious and clever while spoonfeeding an audience and hitting them over the head.

Boll uses inappropriate songs at key moments and it wrecks the mood. The sex scene is bad as is because of the blurring and strange editing. What makes the scene drop-dead awful is the song choice that plays over. It’s some odd pop song with odd arrangements that cripples any intended drama. It’ll really take the tingle out of your dingle. Moviemakers of the world take note, if you want your scene to have some power or importance, do not attach a song that will elicit titters from an audience. Nowhere in Saving Private Ryan could you find the song, “She Thinks My Tractor’s Sexy.”

At the end of Blackwoods I counted the number of artist’s songs used in the film; there are five songs by I Saw Elvis, four Songs by April Daze, and three songs by Charlemane. It seems Boll is more interested in using songs he can get his grubby opportunistic Germanic hands on.

Blackwoods has a score that is overly anxious. There are your standard high-pitched jump moments, but the score also wedges itself into scenes to a comical degree. Take a scene where Matt is being interrogated by the sheriff. The sheriff dictates what he has been told of Matt’s motel room attacker, and ends by noting, “Guy dressed all in black.” The music dramatically swells. We’re meant to distrust the sheriff. Matt says cautiously, “Did I say that?” Sheriff: “Yeah.” Matt: “Oh. Okay.” And the music immediately ends. I kid you not; during Matt’s chase scene in the woods there are tuba sounds on the score. Not a tuba apart of an orchestration, just a tuba. It’s like they recorded this score during take your child to work day.

The acting in Blackwoods could be rivaled by lousy high school theatrical productions. Most of the actors are quite stiff and give terrible line deliveries. Boll truly has no idea what to do with his actors and it shows. Actors will punctuate the dialogue in peculiar places and frequently overact like no one’s watching. Muldoon (Starship Troopers) is a pretty actor without much else going for him. His acting range goes from indignant to quiet anxiety, neither of which is convincing. I think his eyebrows out-acted him. Paré (Eddie and the Cruisers, TV’s Greatest American Hero) looks and acts drowsy the whole movie, like any second he’s in danger of keeling over into dream land. Tracy (40 Days and 40 Nights, White Noise) plays the most challenging part and has some fun with it. Her moments of petulant anger are a welcome sight amongst this acting dead zone.

Boll could have had an effective, loosely entertaining horror movie with Blackwoods. Instead, he and his co-writer attempt to grasp at something smarter and fall flat on their faces. Blackwoods is dull, inane, cluelessly structured, poorly acted, and devoid of any nuance. Boll’s tortured direction relies on a lot of arbitrary and annoying stylistic choices. This creaky psychological thriller thinks it’s clever by playing with flash forwards and contrived Big Twists, but Blackwoods is nowhere near as smart as it thinks it is. Maybe Boll’s penchant for blurring the film was the right move; in a few days that’s all this forgettable movie will become.