A man walks into a talent agency. He tells the agent he’s got a family act the likes of which no one has ever seen before. The agent tells the man to continue. The man’s wife, children, and pet come into the room and proceed to do the most vile, puerile, horrendously vulgar acts to themselves and each other. The agent is shocked. After a long moment of silence, the agent says, “What do you call this act?” The man replies, “The Aristocrats!” Ba-dum-dum.

It’s really not a good joke, but what makes it special is that the middle is entirely open for the comic to say whatever they want. Comedians will build and build in their obscenity so that the weak punchline is practically an afterthought. It’s a joke that goes all the way back to the days of vaudeville. Comics tell it to each other after shows like a secret handshake. The Aristocrats, an unrated documentary, gathers 100 comedians and lets them put their own crass spin on a classic dirty joke.

The movie boasts plenty of well-known names getting down and dirty, like Robin Williams, Chris Rock, Whoopi Goldberg, George Carlin, the South Park creators, Jason Alexander, Eric Idle, Richard Lewis, Andy Dick, Fred Willard, Howie Mandel, Eddie Izzard, and Drew Carey (he insists the punchline should be accompanied by finger-snaps). Few comedians give a full rendition of the joke but the clips are just as potent. Judy Gold involves her unborn baby in the act and Carrie Fisher says her mother likes to sing in a very different kind of shower, but the filthiest mind of all belongs to Bob Saget, who can’t make it through without breaking up and saying, “What am I doing?” The Aristocrats also includes comics from different eras, including Larry Storch, the Smothers Brothers (one of which has never heard the joke before), and even Phyllis Diller, who pretty much just cackles at others. Dana Gould manages to pull together a very funny clean rendition involving the Amish version of the joke. The film opens on Carlin, closes on Gilbert Gottfried, and oh what a journey the film takes.

The Aristocrats is very very funny but also a rather incisive look at the nature of comedy. In between dishing the dirt, various comedians rhapsodize about the mechanics of comedy, the freedom in conquering taboos, and the intricacies of delivery (Paul Reiser stresses that any poo-related parts should be saved for the big finish). Penn Jilette says, “It’s the singer, not the song.” The Aristocrats displays comedy like it was jazz, each individual playing the same note a different way.

Things get a tad repetitious after awhile and the vulgarity starts to lose its impact once you’ve listened to countless unspeakable acts, mostly involving family members, the animal kingdom, and the loosening of bowels. As an example, my friend from college, Jason Davis, attended Mardi Gras in New Orleans one year, and as any viewer of late night TV will attest, the girls have gone wild. The ladies, it seems, will freely show you their bosoms in exchange for cheap plastic beads, and some don’t even want anything in return. Jason said the experience was amazing, at first, but after hours of non-stop frontal nudity, it all got a little tiring after awhile. The rampant nudity lost its effect and Jason started paying more attention to the women who actually kept their clothes on. So too is it with The Aristocrats, in a manner of speaking. 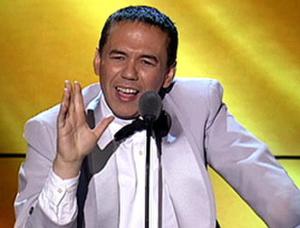 The film’s unabashed vulgarity will spur guffaws and titters, especially in an “Oh-my-God-did-he/she-just-say-that?” way. But after so many tellings, things that were funny because they were taboo don’t seem as funny in repetition. It’s at this point that an audience can really appreciate comics that take unconventional routes toward telling the joke. Eric Meade does a card trick, Kevin Pollack does the joke as Christopher Walken, Mario Cantone performs the joke as Liza Minnelli, Sarah Silverman actually puts herself in the joke’s family (for my money, she gives the best performance), Penn and Teller do a magic trick with a soda bottle, there are jugglers, a ventriloquist, and even a mime. The Aristocrats still has its straightforward dirty pleasures, but it’s much more satisfying when certain comics work outside the box.

It should be obvious at this point but The Aristocrats is not going to be a movie for most people. The incredibly course language and graphic accounts of lewd acts will not sit well with most of the American public. This is a movie strictly for people that have a strong stomach and like hearing a dirty joke. For that group, The Aristocrats will knock you silly with laughter. My three friends whom I saw the film with said they were in pain from laughing so hard. Perhaps that speaks volumes about the company I keep.

The Aristocrats is a bawdy, filthy, hilarious documentary that becomes more than a bunch of funnymen retelling a dirty joke. This is a film for a very select audience, to say the least, and it does lag at parts when the continual vulgarity loses its impact. The Aristocrats also seems to be erratically edited; scenes will rapidly jump from different angles for little reason. Every comedian has their own style and every audience member will find something different to strike their funny bone. At the very end, The Aristocrats invites viewers to submit their own form of the joke for the eventual DVD. I don’t know about you but I’ve already got a goldmine of ideas.