January is typically a cinematic wasteland. It’s the place where films go to die. So imagine my surprise when I heard that Elektra, a comic book movie built around a nimble sai-spinning assassin, was going to be released in January 2005. I remember at one time there were plans for a summer release, which means Elektra had fallen from the very top to the very bottom of expectation. After viewing Elektra for myself I can perfectly understand why anyone would want to dump this clunker.

Elektra (Jennifer Garner) is a feared assassin-for-hire (she even has an agent for her hits). She’s been brought back to life by a powerful sensei, but has ignored a possible higher calling to make her money killing folks. Apparently she is the mythical warrior that will keep the balance between good and evil, or something or other. Her next hit ends up being a nice guy (Goran Visnjic) and his teenage daughter. Elektra doesn’t have the heart to kill them, so she joins them and all three run away from the really bad guys, an ancient group known as The Hand.

1) There is no such thing as characterization, just definition by super power. One assassin is super strong, another can suck the life out of creatures, and a third has the amazing ability to have his tattoos come to poorly rendered life (lucky this guy doesn’t have butterflies and fairies). With a powerful lack of imagination, these assassins are called Stone, Pestilence, and Tattoo (not the Russian girls who make out with each other. That’s Tatu.).

2) The only sense of a story is pitting Elektra against one bad guy after another. There aren’t character arcs and subplots so much as there are end stage boss battles. It gets really repetitious.

3) The film seems like it’s bending over backwards to get character special moves into the story. With 1995’s Mortal Kombat, the writers, and I use that term in the loosest possible sense, had to work a story that included popular video game moves. Working so hard to include something so trivial and arbitrary really ties the storyteller’s hands. Elektra feels like the film would rather try and include some character’s special move rather than formulate a cogent storyline.

4) Once our assassins are vanquished they burst into clouds of yellow dust. I am not kidding. When they die they explode into clouds of mustard-hued gas. Just like in a video game, once you kill the bad guy they disappear with no necessary cleanup. It’s really thoughtful of them.

5) A second player can jump in at any time! In Elektra, different characters magically appear whenever it’s convenient and I?m not even talking about the super assassins.

6) Just like in a video game, you get an extra life! I don?t know why the producers of Elektra didn’t just make a prequel. With a sequel they have to work around their heroine’s untimely death in 2003’s Daredevil, and so we are introduced to the idea that a warrior of great mind can bring people back from the dead. So if Elektra dies (again) she can just be brought back to life. This whole idea practically eliminates any sense of danger and consequence.

So little of Elektra makes any kind of sense. Characters make rash choices and surprise appearances. The villains are a bland, cliched crop from some back order of ancient kung-fu brotherhoods. The plot is mysteriously oblique and has the frustrating habit of using cheats to get around logical roadblocks. About halfway through Elektra I gave up shrugging my shoulders and rolling my eyes. There is no definition on character limits, so anything can happen, and when it does it’s usually very stupid. 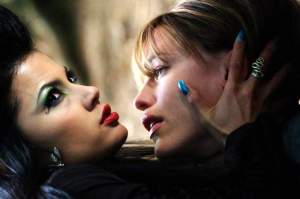 Even worse is how dreadfully dull Elektra can be. The last two acts are compromised of nothing but a long, boring chase scene. The action sequences are brief and unoriginal, which include the thousandth inclusion of a hedge maze. There’s one moment where Elektra is battling in a room that has sheets flying all around for no good reason. It’s visually reminiscent of a Where’s Waldo? page. Take that for what you will.

The film is brisk, clocking in at just 90 minutes, but you don’t care about the characters because 20 minutes is spent establishing them, and the remaining 70 is spent watching them run.

The only redeeming quality of Elektra is its star. Garner is suited for the running, jumping movies, but she also has great acting chops behind her square jaw and impeccable physique. She casually generates intensity but also has a light, humorous touch. It doesn’t hurt that she looks fabulous in a red bustier. Her character is given OCD but then this plot is dropped entirely. Without the appeal of Garner, Elektra would simply be Catwoman.

Elektra is a flat comic adaptation that plays more like a video game, and just like in real life, watching a video game is no fun at all. Things happen, characters appear, people explode into clouds of yellow dust, and it’s all a bunch of uninteresting, half-baked nonsense. Elektra is frustrating, labored, ridiculous, and empty of thought and enjoyment. Why should I pay to watch Garner kick ass when I can watch Alias on TV and see Garner kick ass for free? And the plots of Alias are brazenly complex, fun, and high-spirited. I care about the people and events on Alias. With Elektra, the only thing I cared about was when the film was going to be over.