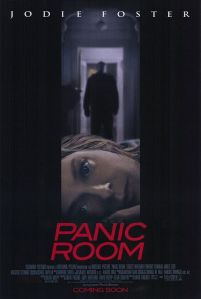 Meg Altman (Jodie Foster) is a newly divorced woman shopping around Manhattan for a new place to sow her wild oats thanks to a healthy marital settlement. The brownstone in question is truly spacious. It comes complete with four floors and a working elevator installed by the invalid former owner. Megs teenage daughter Sarah immediately takes a shine to her new digs and urges mom to sign the dotted line. It seems besides a great location the place also comes complete with a secret room that houses a separate phone line, a wall of monitors all corresponding to cameras, as well as medical supplies and a silver commode. This panic room is surrounded by four feet of concrete and sealed by an airtight steel door. It seems its the ultimate in home protection.

But before Meg and Sarah can barely unpack a trio of burglars enters the home with the hopes of securing the reclusive former owners riches. Meg grabs her daughter and scurries into the panic room just in time to seal the door behind her. She communicates to the men to take what they want and leave. One of them writes on a piece of paper that what they really want is inside the panic room. The burglars aren’t going anywhere, are well equipped and know the panic room better than she does. Meg and her daughter are safe but trapped with little voice to the outside. Thus the pieces are all set and an intricate game of moves and counter-moves takes place to see who has the upper hand, in and out of the panic room.

Panic Room is that rare treat as a movie alive and well with energy, tenacity and a double-dose worth of entertainment. The movie flies by and youre left catching your breath or checking your pulse at certain junctures. The suspense continues in an arching fashion and keeps giving the audience new situations to be taken with.

It’s been two years since the public has last seen Jodie Foster in a movie and its good to have her back. Her performance is nominal but she’s put through what must be the most physically strenuous film of her career. She has that rare versatility as an actress to wear corsets and frilly-wear one film and then to be holstering a gun and barking at transsexual serial killers the next, all while maintaining complete confidence and integrity at either.

It seems that today we have a staggering lack of female action leads that could kick your ass. Sigourney Weaver once owned this throne but now the only thing we have to offer is pinups. We have Angelina Jolie’s scary glares. We have the pout of Michelle Rodriguez, who has since blown what promise she showed in Girl Fight by starring in two horrible consecutive films about zombies (one of these said zombies being Vin Diesel). And I dont think I even need to go into Milla Jovovich. So it’s refreshing knowing that Foster, even while pregnant for part of filming, can swing with the big boys and surely roll some heads and take some names.

The actors portraying the burglars play basic criminal archetypes, but do passable jobs with them. Forest Whitaker is the soft-spoken security expert who refuses to play rough if the situation calls for it. Jared Leto is the comically impulsive grandson who feels slighted by not being granted a sum of the inheritance. Dwight Yoakam (yes the Dwight Yoakam) is the questionable addition with an itchy trigger finger and a determination to get his mitts on the money.

Director David Fincher, the auteur that gave us a head in a box with Se7en, returns with his kinetic kick and brooding finesse. Fincher is a vastly talented visual director and adds more richness to the film with lovely cinematography and an astutely mature sense of tension.

However, Fincher’s sensory excesses get the better of him the longer the film goes. Does the audience really need to have the camera travel through the handle of a coffeepot? Does anyone really need the camera to swirl into the bulb of a flashlight so we see how it works? It may come to the point where you’re anticipating the next superfluous camera movement, and praying that it isn’t plunging into Yoakam’s nostrils. Once or twice is fine, but after awhile the nomadic camera movements become far more distracting to the film. The ending is also a bit anti-climactic for my taste.

Panic Room, despite a few missteps, is a great exercise in suspense. You may get so wrapped up youll find yourself, as I surprisingly did, reverting to the annoying habit of talking to the characters on screen and trying to instruct them. Panic Room is the kind of movie you wish Hollywood made more often: something with genuine thrills that leaves you pinned to your seat and bubbling with anticipation, before turning you into a puddle of warm goo.