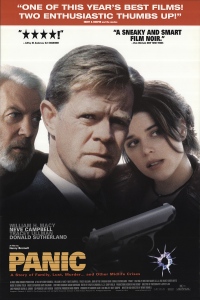 The story behind Panic goes something like this. The film was dropped by Artisan because they got test screening results back and apparently it wasn’t what they wanted. After this set-back it was going to be dumped to the wasteland of direct-to-cable like so many other troublesome pictures studios feel would not earn a buck if they were bleeding on the side of the road. After some fighting, particularly from critic Roger Ebert, a production house decided to distribute Panic in a very limited release. So what does this cinematic game of musical chairs mean? It means if you have a chance see this film.

Panic is a story about characters first and foremost. William H. Macy plays the son end of a father-son team of hitmen, with Donald Sutherland as the oppressive patriarch. Macy is a man who is never truly happy, almost like it is an impossibility for him at this point in his life. His wife (Tracey Ullman) is flaky and gives into her paranoia of her hubby having an affair with a younger chickadee. Macy meets an attractive and mysterious ingenue (Neve Campbell) while waiting for therapy. He begins on an obsession he can’t explain and fantasizes about her as the escape and ticket to happiness that is outside his reach.

The acting is as rich as the characters. Macy plays low-key but suits the subservient ghost that his character has become. Sutherland is haunting as the controlling father figure and the flashbacks between him and young Macy are disturbing as he plants his seed of control. Even at age six Macy’s character is referring to his father with “sir” tagged to the end of every sentence.

Neve’s character is the most in depth she’s ever been dealt, though her runner-up is a girl constantly chased by men in black robes with knives. Ullman is a nice presence and the audience really can sympathize with her. The child who plays the son of Macy and Ullman is one of the most adorable child actors I have ever seen. He lights up the screen every time he is present.

The story is brisk at a mere hour and a half. It is written and directed by a former writer of ‘Northern Exposure’ and ‘Homicide’ and the attention to characters shows. The film moves not through plot occurrences but through characters acting. When Macy discovers that the final hit he has to do is on his own therapist (John Ritter) his journey is one involving everyone around him in his life. The strains and pulls on this man are encompassing to watch.

Panic is a glimpse at a quiet movie told about the life of a man caught in his father’s grasp. Macy is a man conditioned to saying “he’s sorry” even if it is not deserved. His character is rich and Panic is a strongly acted gem if you can locate it.