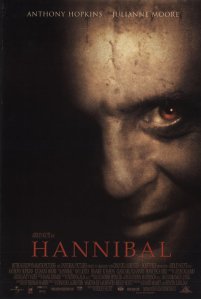 Trying to sequelize Silence of the Lambs is surely harder than trying to sequelize The Blair Witch Project. The novel Hannibal by Thomas Harris I don’t think will be confused as a necessary burst of creative ambition, and more of a chance to cash in on the love of Hannibal Lector. Though I’ve not read a line from the book from what I’m told the movie is faithful until the much hated ending. Starting a film off a so-so book isn’t a good way to begin, especially when you lose four of the components that made it shine Oscar gold. 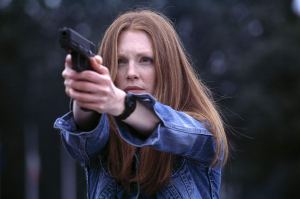 The element that Silence of the Lambs carried with it was stealthily gripping psychological horror. It hung with you in every closed breath you would take, surrounding you and blanketing your mind. I mean, there aren’t many serial killer movies that win a slew of Oscars. Lambs excelled at psychological horror, but with Hannibal the horror turns into a slasher film more or less. What Lambs held back and left us terrified Hannibal joyfully bathes in excess and gore.

Julianne Moore, a competent actress, takes over from the ditching Jodie Foster to fill the shoes of FBI agent Clarice Starling. Throughout the picture you know she’s trying her damndest to get that Foster backwoods drawl she used on the original down. The problem for poor Moore though is that her character spends half of the film in the FBI basement being oogled by higher-up Ray Liotta. She doesn’t even meet Hannibal Lector until 3/4 through. Then again, the title of the film isn’t Starling.

Anthony Hopkins returns back to the devil in the flesh and seems to have a grand old time de-boweling everyone. Lector worked in Lambs because he was caged up, like a wild animal not meant for four glass walls, and you never knew what would happen. He’d get in your head and he would know what to do with your grey matter – not that he doesn’t have a culinary degree in that department in this film. Lector on the loose is no better than a man with a chainsaw and a hockey mask, though he has a better knowledge of Dante and Florentine romantic literature. Lector worked bottled up, staring at you with dead unblinking calm. He doesn’t work saying goofy “goody-goody” lines and popping out of the shadows. 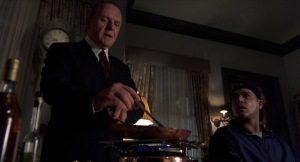 Since the director, screenwriter, and female lead didn’t show up for the Lambs rehash, it feels a tad chilled with Ridley Scott’s fluid and smooth direction. The cinematography is lush and very warm.

Gary Oldman steals the show as the horribly disfigured former client of Lector’s seeking out revenge. His make-up is utterly magnificent and the best part of the film, he is made to look like a human peeled grape. Oldman instills a Texan drawl into the character yet making him the Meryl Streep of villainy.

Hannibal is no where near the landmark in excellence that Silence of the Lambs was but it’s not too bad. It might even be good if it wasn’t the sequel to a great film. As it is, it stands as it stands.