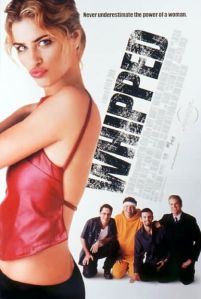 The ailing problems with Whipped aren’t with its inept acting, writing, and direction, though those do add up. The true problem is that Whipped isn’t just a bad movie as say Battlefield Earth; no my friends, Whipped is a viciously ugly movie, the type of which that force you to take an hour long shower afterwards.

The story of Whipped unspools over a familiar diner with four friends bantering over female conquests, misogynistic games and chest pounding, and general nastiness. Our core of characters the usual stereotypes with the supposedly sensitive one, the yuppie Wall Street kid, the playa’ etc. Writer/director Peter M. Cohen tries his darnedest to raise eyebrows with vulgarity and raunch, but minus any wit, just making it seem shallow and inane, which is a perfect description of Whipped in any kind of masochistic nutshell.

The three guys eventually fall head over heels for the same woman in Amanda Peet. Eventually these crass individuals all learn some kind of lesson when Peet plays each of them for the same kicks the men derive. Is this supposed to be a feminist statement in the end of a movie so full of hatred for women that it could have been In the Company of Men minus the quality? Whipped is billed to expose the politics of dating but what it perceives as breaking new ground and insights in dating we all learned many years ago, some of it on the schoolyard playground.

Whipped has such ugly contempt for basically anything living as we carry along with the four pathetic human examples. The humor is dead-on-arrival and horribly bad. The acting is so amateurish. Yet Cohen gets the worst for his flat and lifeless direction.

Whipped may prove not to be the worst movie of this year already full of its fair share of bad, but I defy anyone to discover a film that is more ugly, spiteful, and horribly uncomfortable to sit through.