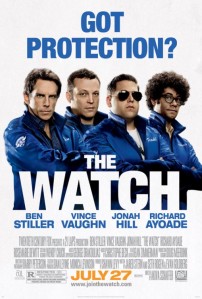 If scientists could take time away from, you know, curing diseases, and craft the perfect blend of “meh” in a lab, it would be The Watch. It’s not particularly offensive or terrible but it’s certainly not good. The humor of boys misbehaving and talking tough doesn’t ever seem to get further than the initial concept. The movie ends up becoming a more crass version of Ghostbusters, with a special fascination for the male member. This is a very penis-obsessive movie. Usually guy-centric sex raunchy comedies will definitely feature strong discussion/comedy revolving around male genitalia, but this is one of the few movies where complete storylines hinge upon penises (weird imagery, I’ll admit). Ben Stiller, Vince Vaughn, and Jonah Hill are more annoying than anything else. Poor Rosemarie DeWitt as the underwritten wife role in what is essentially a boys-behaving-badly movie (also her second 2012 movie where she’s trying to get pregnant). When the movie goes full-force into action mode, it loses just about any semblance of comedy. I laughed about three times, and that was thanks to Richard Ayoade (TV’s The IT Crowd) and, believe it or not, Will Forte (MacGruber). Sitting through 105 minutes with little laughs, irritating characters, and poorly conceived action in place of genuine comedic payoffs, well it’s not exactly a recipe for a successful summer comedy. And yet, with all its obvious faults, I couldn’t hate the movie as others have. It’s certainly not likeable but it does go about its business with a certain swagger, albeit misguided. Cocky loudmouths failing at entertainment are still marginally better than artists who don’t even try. It sounds like I’m reaching, and I am, but The Watch, certainly a bad comedy, may eventually be worth a watch when, you know, it’s on TV and you can half-heartedly pay attention to it while you go about your day.