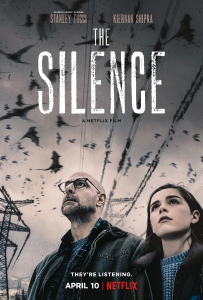 Sometimes in Hollywood there is such a thing as coincidence. The novel The Silence was published in 2015, the film adaption in the works in 2017, and yet it feels overwhelming like a rehash of another sound-sensitive blockbuster, 2018’s A Quiet Place. Following in the footsteps of a popular hit, you better be able to bring something different to the table or else you risk feeling like an also-ran. Having watched The Silence on Netflix, it’s hard not to constantly be comparing it with A Quiet Place, and it’s hard not to constantly be wishing you were watching A Quiet Place instead of this mess.

A group of scientific spelunkers unleashes a subterranean species of bat dinosaurs that are attracted to sound. A family (Stanley Tucci, Mirnada Otto), their ailing grandparent (Kate Trotter), deaf teenage daughter (Kiernan Shipka), son, dog, and uncle (John Corbett) hop in the car and head to the countryside for safety, but it’s not that easy. 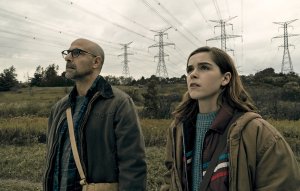 The Silence fails as a thriller because it’s so unclear so often about the nature of its threat, its extent, and the lack of urgency on display. Once the bat dinosaur monsters are on the loose, it feels like the rest of society immediately knows the rules of what attracts them. People in subway cars are already banishing women with crying babies to die alone. At the same time, the reaction seems absurdly mellow. It dilutes the sense of danger when nothing feels imminent. The family casually piles up in the cars and heads out to the country but nobody seems to be too panicked. It was at this point, relatively a half hour in, that I started getting the first of many Birdemic vibes. Why would they think the neighboring countryside would be out of the reach of winged monsters? How many winged monsters are there? Because we’re dealing with the immediate aftermath of the first strike, it can create points of disbelief. At least Bird Box had that crazy and effective opening of society breaking down. We don’t get anything like that.

I also call into question the thinking behind going out to the country as a refuge. If they’re not outrunning the flying monsters, it’s the idea that there will be less noise away from the cities. This seems like the exact opposite of what people should be doing. It’s the nitpick from A Quiet Place about why the family didn’t just live under the waterfall (as we all do, of course) because the loud sounds muffled the other sounds that could be absorbed. Therefore it makes strategic sense to stay around the places that makes the most noise, like a bustling city that also has locked chambers within chambers. This is later demonstrated in a scene where the dino bats are discombobulated by an indoor sprinkler system. Perhaps this is because of the rain, but if that’s the case then everyone needs to relocate to the Pacific Northwest. 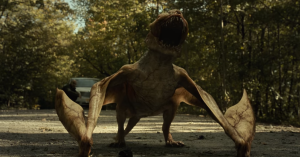 Without a sense of danger, the movie suffers from its timeline and lack of structure. It doesn’t feel like the movie is going anywhere. The immediate aftermath of the dino birds appearing leads to a limited response. How interesting or scary can things get when the Internet is still functioning and the teenage daughter can still keep up with her instant messages even out in the country? This brings me to the last act where the movie completely changes into a home invasion thriller with a religious cult that has bitten off their own tongues. This creepy cult is obsessed with the family, following them home to that country cabin because… the teen daughter is “fertile.” What the hell? It’s way too soon for this kind of apocalyptic nonsense. The world hasn’t broken down into factions. Society is still standing. It’s not like there is a shortage of fertile women, like some Children of Men doomsday. This group must have been waiting for any minor social setback to jump forward with their dreams of being a creepy cult. This late group of antagonists attach “sound bombs” in the form of smart phones. Even a little girl straps herself with several phones like she’s a suicide bomber. Even dumber, the other characters flail around once the phones ring like they have no idea how to turn off phones. It all comes together to form a hilariously awful conclusion that teeters into pure camp.

Let’s tackle one of the more essential elements of A Quiet Place that feels almost entirely unnecessary with The Silence, and that’s the hearing loss of the teen daughter. It astounds me that these two movies have similarities that go even that deep, even to the aesthetic choice of adopting the lack of sound when the camera takes her perspective (so many strange coincidences, which extend into its Bird Box-like cult as well). This element was a strength of A Quiet Place and played a significant plot purpose, placing the daughter in danger because of her sensory disadvantage, but it also related to the ultimate reveal of how to combat the monsters. It also communicated the distance she felt between the other members of her family after a horrible tragedy that she blamed herself over. It’s a carefully integrated and thoughtful addition to the movie.

Now take The Silence. The daughter has had a recent accident that damaged her hearing, which explains why she doesn’t have the vocal affectation that many hard of hearing people have adopted. The artistic choice that doesn’t work is that The Silence at no point makes her lack of hearing meaningful to the plot or for her character. If you were hardly paying attention you would never know she had hearing loss. Conversations between the family occur rapidly, with minimal signing, and sometimes the parents aren’t even looking at her when they speak. The best lip readers in the world only get a third of what is being said. She is holding normal conversations with no struggle. At no point does her disability put her at risk. At no point does it have any bearing whatsoever on anything, except showing the actors spent a weekend learning sign language.

Another laughable feature is the presence of completely superfluous voice over narration from the daughter. It is powerfully clunky and made me cringe in the beginning and at the end. She’s explaining things that don’t need explaining and doing so with lines that don’t add any real insight. “I had to adjust to being deaf,” she says, while jerky students make fun of her lack of hearing because I guess that’s a thing people do. Then at the end she bounds back with a resilient narration about how it’s a race for evolution, but is it really? I think mankind has a leg up over creatures that, until two days ago, evolved in a subterranean environment. It’s another sign the movie has no idea what it’s doing with its story and how to relay the important information or what even is important.

Much could be forgiven if the scares were consistent, well constructed, or even interesting, or if the characters were engaging and relatable, or if the structure packed a series of setups and satisfying payoffs, or if there was a sense of thought and care put into the world building with these unique creatures, or, all the things that A Quiet Place achieved. The Silence is a movie that is best deserving of being silent. Skip this Netflix original and, if possible, watch A Quiet Place again. This one is not entertaining, from a good or bad perspective, and even at a mere 90 minutes feels like a wasted opportunity for a nap.

This is such a loathsome comedy that you feel the actors compelling you to put them out of their collective misery. It?s Heather Graham’s second pregnancy comedy in two years, except in 2008’s Miss Conception she wanted to get pregnant. Has Graham become the new face of the ticking biological clock? Graham is a perfume exec who gets in the family way. And how do we reveal this big news? By extended farts and projectile vomit. Stay classy. Instead of approaching an impending baby seriously, the film uses the pregnancy as an inane romantic comedy wedge. Graham’s hubby (Jerry O’Connell) doesn’t think it?s his because he “double bags it.” She thinks he’s a cheater. Their misunderstandings are predicated on the idea that nobody ever stops to say anything that might clear the air. This stuff is beyond sitcom level contrivance. Then the film becomes a battle of the sexes debacle as neither side wants to give in and leave the home, so we?re treated to a montage that zooms through EIGHT MONTHS of pregnancy. This is a comedy with no real feel for pacing, tone, setup, or context. The actors crank it up like they’re bouncing around in a farce, when this is really just a witlessly vulgar Knocked Up knock-off. The director (by the guy who made a movie trying to go on a date with Drew Barrymore) doesn’t so much deliver the jokes as pronounce them dead. This is a vacuum of funny with awful jokes, awful acting, awful attempts at being bawdy, and an even worse sentimental transformation at the end. This is without a doubt one of the most disastrous, abominable comedies of late and should have been terminated at the early script stage. Watch the trailer and spare yourself the agony. Even the trailer can’t help but indulge in a fart joke. The trailer, for god’s sake.

Toula Portokalos (Nia Vardalos) opens by telling us that as a Greek woman she has three responsibilities, “1) Marry a Greek boy. 2) Have lots of Greek children. 3) Make lots of food.” Toula works in her family’s restaurant letting life pass her by, while her father pleads with her to get married even though she is already “old” at 30. It doesn’t seem like that day will ever come for Toula, nor is she looking forward to it, until a handsome stranger (John Corbett, Aidan from Sex and the City) catches her eye in the restaurant. Through more encounters the two seem to have sparks flying off from the heat they generate. He pops the question and Toula happily says yes. There’s only one slight problem – he’s not Greek.

My Big Fat Greek Wedding isn’t anything provocative or innovative but it does have its charming moments and engaging humor. These “ethnic family comedies” are really a double edged sword to work with. You see, they will exaggerate the cultural eccentric-ness of the characters to the point of gross parody but then rely on them to become endearing lovable characters who the audience appreciates for the very same reasons it’s laughing at them. And while Greek Wedding can be found guilty of this notion as well it really does take someone from the inside to come up with this stuff, so there must be some love there to start with.

Vardalos, who also wrote the script, is a perfect casting choice exactly because of her everyday looks. This isn’t someone like Jennifer Aniston trying to pull off being poor and un-pretty; this is a normal looking gal pulling off normal. It works exceptionally and Vardalos certainly knows how to hit a joke. The supporting cast of goofy yet lovable Greeks is played with admirable gusto by the many assembled players. A favorite of mine is the elderly grandmother who continues to try and escape from their home. And yes, an N’SYNC member is in this movie. Why I will never know. Is he even Greek? Is “Fatone” a Greek name?