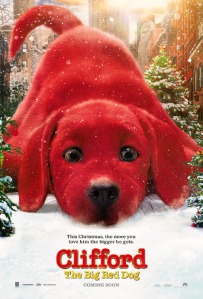 What can one expect from the 80-minute live-action feature film of a children’s book series that was about a giant red dog? While ostensibly made for little kids, like those strictly under ten, Clifford the Big Red Dog (not to be confused with the equally alarming Clifford) is banal entertainment that’s inoffensive as long as you don’t have a deep personal attachment to the best-selling source material. It’s your standard children’s fantasy come alive with a giant dog that needs to be cared for as well as kept a secret. There are rambunctious moments of quelling the dog, mischievous moments of chasing the dog, and frantic moments of running away from a gene-splicing tech guru (Tony Hale). And oh, you bet there is scatological humor. We got dog farts. We got dog butt humor. We got dog pee. We got dog poop, at least in reference though thankfully never seen. I don’t know why we needed an added story of a little girl struggling to fit in at middle school with preppy, mean girls. I guess because a big red dog is also struggling to fit in? For that matter, the movie never returns to the opening scene of Clifford’s dog family being taken from him (a baffling and sad opening). There’s a more charming, heartfelt movie somewhere in here, akin to a Paddington where the central character changes those around them for the better, but our little New York City neighborhood is strictly in a more plastic and safe world. There are a few jokes that slipped past and made me laugh, so it’s not all a loss. Clifford doesn’t pretend to be anything more or less than its meagerly stated goals, and it’s a serviceable family film as long as your little ones have a low threshold for realistic-looking CGI dogs.

Pierce Brosnan returns for his forth outing as super-spy James Bond, this time trying to thwart, here goes, a former North Korean militant who has switched genes to look like a wealthy Anglo-Saxon playboy. And what does this stupid evildoer want? To erase minefields in Korea with a giant reflective mirror in space that channels a giant solar beam of DOOM! Commence smacking of the forehead.

Berry may have an Oscar but she is not terribly great in Die Another Day. She is so awful that if she sucked anymore she would physically implode. Heres an example: she literally stabs someone with a book and glibly says, ”Read that, bitch.” Ugh. Want another? When asked by a diamond-studded baddie, whom sent her, Berry’s defensive reply is, “Your Mama.” How in the world did this person become a secret anything?

The Bond series has always been great escapist fare but its age is becoming much more apparent. Die Another Day starts with a montage of Bond being tortured in Korea. When he’s released our dapper gentleman looks exactly like the American Taliban, with flowing hair and beard. He’s been abandoned by his people out of the fear he has confessed vital info while under 14 months of torture. Yes, that’s right folks, 14 months of torture. You think an agent like Bond, who has foiled devious plots 19 previous times, would be worth retrieving.

Brosnan is dandy and a charming actor but even he is showing some gray. It may be time to tap another into the martini-swilling shoes. Dame Judi Dench and John Cleese provide stable supporting bits, but what is Michael Madsen doing in this?

Director Lee Tamahori has directed one of the best films on self-abusive relationships ever (Once Were Warriors) and also directed one of the worst thrillers ever (Along Came a Spider). Tamahori surprisingly brings some slick touches to Bond and seems to be trying to tinker with the stagy formula, and when he gets away with it Die Another Day is thrilling. A car chase set atop a glacier is visually stunning and pulse pounding. Then this chase continues into a melting ice palace. Brilliant if not a tad bizarre. What do ice palaces go for on the open market? Whats the upkeep like?

Die Another Day is the most self-conscious of the Bond franchise with numerous homages and in-jokes. Berry’s introduction is a direct reference to Ursula Andress classic bikini-clad ashore entrance in Dr. No. Bond confesses his relationships with women never seem to make it to second dates, despite the vigorous sex, and a female agent (Rosamund Pike) even jabs, “I know you, sex for dinner, death for breakfast.” The flaccid villain runs a diamond company and actually has a magazine headline that states: ”Diamonds Are Forever.” At least the multiple writers were having some fun.