I don’t think I’ve better empathized with hearing loss and deafness than with Sound of Metal, a moving and observant drama about a heavy metal drummer quickly losing his sense of hearing. Riz Ahmed (Nightcrawler) plays Ruben, a former junkie who is four years sober and worried about losing his girlfriend/band mate (Olivia Cooke) with his recent diagnosis. He’s attending a treatment center meant to cater to a deaf community and transition others into this community. Ruben is defiant, depressed, angry, all the stages you can imagine with grief. The movie is at its best during its quiet and contemplative moments where we empathize with the terror and alienation of Ruben. When he first joins the center, we don’t get subtitles for the many signed conversations between members. It’s only after Ruben learns ASL, integrates into the community, and opens himself up to the program that we too get to be knowledgeable. The sound design is exceptionally utilized to illustrate Ruben’s changing perspective, and some later choices with it might make you long for the peacefulness of silence. The movie is exquisitely thoughtful and considerate while maintaining a subtle, character-driven approach that keeps things from wallowing in self-pity. For many of the deaf, hearing loss isn’t seen as a disability but a community with its own culture and quality of life. It’s understandable that Ruben is focused on loss but the movie doesn’t dwell in loss, more so transformation and acceptance. Ahmed is fabulous in the lead role which requires him to rely primarily upon non-verbal expression for extended periods. His eyes are his best vessel for communicating Ruben’s emotional state, and Ahmed is sensational. Paul Raci is also great as the leader of the treatment center and the responsibility and generosity he feels to those in his care. Sound of Metal is an immersive, sensitive, authentic and poignant drama with an Oscar-caliber lead performance and a depth of compassion for the many people of the deaf community. 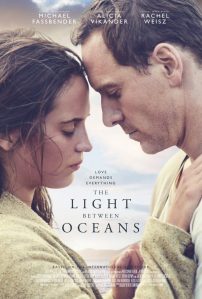 A melodrama through and through, The Light Between Oceans is at its core a pretty-looking movie about pretty-looking people being sad. The premise almost seems like a parody of prestige indie filmmaking in the 1990s. Tom (Michael Fassbender) is a shell-shocked WWI vet-turned-lighthouse keeper in Australia who falls in love with mainland lady, Isabel (Alicia Vikander). They marry and have difficulty conceiving, with Isabel enduring two grueling miscarriages. Then one day a dingy washes ashore with a crying baby inside and a dead man. Rather than alert the proper authorities, they decided to bury the man and raise the child as their own. Years later, the couple discovers the girl’s real mother, Hannah (Rachel Weisz), who has been racked with unanswered grief ever since. The couple is then thrown into an emotional crucible testing their ethics and moral compromises and the question of ultimately what’s in the best interest of this little girl. It’s a movie that’s geared to put you through an emotional wringer, and the actors do their part. Vikander (Oscar winner for The Danish Girl) is downright luminescent and dives deep into all of her character’s varied and heightened emotions. The scenes of her dawning realization of the miscarriages and her helplessness are heartbreaking without being maudlin. Weisz is shaken to the core when her identity is robbed from her; she’s so fragile and holding on to hope so hard you might think she’ll collapse any moment. Fassbender internalizes the most and fully communicates the inner struggle of his character’s guilt. Director and chief adapter Derek Cianfrance (The Place Beyond the Pines) has made an intimate relationship drama in a beautiful, sea-swept location, and the kind of Big Feeling classy melodrama you came to expect from Anthony Minghella. The problem is that Cianfrance’s characters are held too much at arm’s length for resonance. We empathize but not nearly as deeply as we could, and by the end the movie washes away like the surf.

Ambitious filmmaking is welcome, but usually ambition leads somewhere, which is the main problem with co-writer and director Derek Cianfrance’s unwieldy 140-minute multi-generational crime drama, The Place Beyond the Pines. First we watch Luke (Ryan Gosling) as a traveling motorcyclist enter a life of crime to support his infant son. Next the focus shifts to Avery (Bradley Cooper) as a cop with a conscience running into corruption on the force. Last, we jump ahead into the future and watch the dramatic irony unfold as the children of Avery and Luke interact, waiting for them to learn their paternal connection. I believe Cianfrance (Blue Valentine) and his team was attempting to tell a meditative, searching drama about children paying for the sins of their fathers, the lingering fallout of bad decisions and moral compromises. Except that’s not this film. By the end of the movie, while some secrets have been laid bare, there really aren’t any significant consequences. The film does an excellent job of maintaining a sense of dread, but it doesn’t come to anything larger or thought provoking. The entire structure of this film is geared toward a tragic accumulation, but it just doesn’t materialize. That’s a shame because it’s got great acting through and through, though I have grown weary of Gosling’s taciturn antihero routine that seems like a rut now. Avery’s portion of the plot was the most interesting and anxiety-inducing, but I found the movie interesting at every turn. The characters are given pockets of nuance and ambiguity as they traverse similar paths of desperation and conciliation. The Place Beyond the Pines is a perfectly good movie, albeit disjointed, that cannot amount to the larger thematic impact it yearns for.