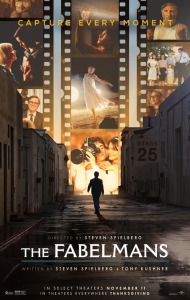 Steven Spielberg has been the most popular film director of the last fifty years but he’s never turned the focus squarely on himself, and that’s the draw of The Fabelmans, a coming-of-age drama that’s really a coming-of-Spielberg expose. The biographical movie follows the Fabelman family from the 1950s through the late 60s as Sammy (our Steven  Spielberg avatar) becomes inspired to be a moviemaker while his parents’ marriage deteriorates. As a lifelong lover of movies and a childhood amateur filmmaker, there’s plenty here for me to connect with. The fascination with recreating images, of chasing after an eager dream, of working together with other creatives for something bigger, it’s all there and it works. I’m a sucker for movies about the assemblage of movie crews, those found families working in tandem. However, the family drama stuff I found less engaging. Apparently Sammy’s mother (Michelle Williams) is more impulsive, spontaneous, and attention-seeking, and may have some un-diagnosed mental illness at that, whereas his father (Paul Dano) is a dry and boring computer engineering genius. I found the family drama stuff to be a distraction from the storylines of Sammy as a budding filmmaker experimenting with his art and Sammy the unpopular new kid at high school harassed for being Jewish. There are some memorable scenes, like a girlfriend’s carnal obsession with Jesus, and a culmination with a bully that is surprising on multiple counts, but ultimately I found the movie to be strangely remote and lacking great personal insight. This is why Spielberg became the greatest filmmaker in the world? I guess. I’ll credit co-writer Tony Kushner (West Side Story, Lincoln) for not making this what too many modern author biopics have become, a barrage of inspirations and connections to their most famous works (“Hey Steven, I want you to meet our neighbor, Ernest Thalberg, or E.T. as we used to call him back at Raiders U.”). The Fabelmans is a perfectly nice movie, with solid acting, and the occasional moment that really grabs hold of you, like a electrifying meeting with a top Hollywood director in the film’s finale. For me, those moments were only too fleeting. It’s a family drama I wanted less family time with and more analysis on its creator.