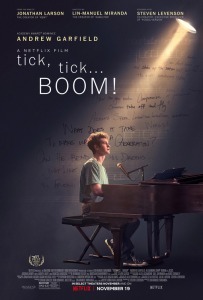 Netflix’s tick, tick… BOOM! is a cause celebre that has attracted none other than the likes of Lin Manuel-Miranda. This is Miranda’s directorial debut, which Netflix won in a bidding war, and it’s filled to the brim with Broadway legends and theater titans who all want to rally to the cause of bringing alive the other show of Jonathan Larson’s tragically short career. Larson would go on to create the hit musical Rent but died before it opened to the public, succumbing to a sudden aortic aneurysm at the age of 35. He never lived to see the tremendous success of Rent and that legacy is the emotional substance of tick, tick… BOOM!, if you happen to know about it. The story, and consequently the movie, feel like a lob to the insulated world of theater aficionados. The movie is semi-autobiographical about Larson (Andrew Garfield) on the verge of turning 30 in New York City in 1990 without achieving his big artistic dreams. He’s been toiling with a satirical sci-fi musical opus for years and is close to finishing it for a make-or-break presentation. The movie is based on Larson’s one-man show detailing his creative process and being young and hungry in New York in the early 90s. It was moderately successful and paved the way for Rent, but it was further adapted in 2001 into a three-person show, which has expanded even further with the film. The songs, written and composed by Larson, are enjoyable but none of them really stand out. I may have liked the least substantial one the best where Larson sings about his distaste at serving brunch patrons in a parody of Stephen Sondheim’s Sundays in the Park with George. The sequence is also wall-to-wall with Broadway cameos. I could not better emotionally connect with the movie. It hangs with looming tragedy of Larson’s surprise death, only five years away, as he wants to do something great with his life and make artistic waves. I think if you removed that added dramatic irony of tragedy, it’s watching a young artist struggle in the theater scene and hold onto his vision, integrity, and friendships, something we’ve seen but benefits with the verve of perosnality. As a story, it’s fallen into a trap where the struggles can be quite relatable to aspiring creatives and also not specific enough to greatly care about Larson as a character onscreen. Garfield sings well and is perfectly charming. Miranda proves apt with the language of film to translate from the confines of the stage. The entire project feels suffused with admiration and good intentions. tick, tick… BOOM! is a labor of love from many theater professionals. It’s an amusing but emotionally limited musical experience. Still, with this much talent, heart, and good will, it’s worth watching for no other reason to see what Miranda and his theater brethren can do together when trying to celebrate one of their own.