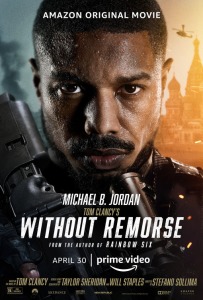 Tom Clancy’s Without Remorse is Tom Clancy without Tom Clancy. It bears no resemblance to the famous author’s 1993 novel even though the entire production feels remorseless about being generic military thriller genre grist. There’s nothing to spark the imagination here, no signature action sequence or well developed turn of events, no colorful personalities or hissable villains. It’s all predictable from the opening credits onward, from the opening mission that cannot go according to plan, to the assumption of the short shelf-life for the pregnant wife in Act One, to the Obvious Red Herring Antagonist and the Obvious Real Antagonist played by the big name actor, to the presumptuous preparations for building a franchise in post-credit sequences. The best thing about Without Remorse is Michael B. Jordan as our lead Navy Seal seeking vengeance and climbing the ladder of international conspiracy. Jordan gives a far better performance than this material and movie deserves, always demanding your attention. He’s charismatic even in generic thrillers like this one, and it is the definition of a generic military thriller lost in the dull minutia of a thousand other similar movies. There’s really nothing separating this movie from the glut of direct-to-DVD action thrillers starring the likes of Bruce Willis (who filmed his part over a weekend). The motivation for the villain’s plot to kick-start another global war with Russia is laughable when there’s a ideological motivation within reach that would have worked and been interesting, namely declaring Russia already an enemy of the country and forcing those in power to fight the war they are ignoring. Instead, the stated rationale is so much dumber. If you’re a fan of these kinds of action thrillers, or the sub-genre that Clancy carved out for himself for decades, then you’ll likely find enough to pass the time with Without Remorse. It had glimmers where it could have stepped outside the mighty shadow of its influences. I wouldn’t have been surprised if this was starring Dolph Lundgren rather than Michael B. Jordan.