I’m close to finishing the documentary My Octopus Teacher and felt the urge to already begin typing out my thoughts, something I rarely do as I prefer to marinate over movies, let alone waiting for them to conclude. This Oscar-winning documentary wasn’t even part of Netflix’s critics screeners they sent me in the mail to consider for the top documentary prize, which tells me even its home didn’t have the highest of hopes for the true story of one man’s relationship to a mollusk. As it steamrolled through the awards season, my curiosity grew, and I finally took the plunge and watched the movie within hours of it being declared the finest documentary of the year by the Academy. As you can likely guess from the fact that the movie is still ongoing while I write, I may disagree with the Academy’s choice. My Octopus Teacher is a beautiful looking movie with some larger messages about our connections to nature and conservation, but the entire time I kept looking around and thinking, “There has to be more to this, right?” Alas, this is the story about one man and the octopus that won his heart, as told by that man, and that is it.

Craig Foster was a depressed nature photographer who was feeling lost. He would dive into the icy waters off the South African coast to reconnect with his childhood. He discovers a peculiar octopus and follows her movements, studying her for months, and earning the trust of the creature. Craig learns about himself and his view of nature through this fortuitous undersea bond.

This is literally the story about one man explaining, without interruption, his life lessons he has learned through his yearlong relationship with an octopus, and I just couldn’t fully engage with this on an emotional or intellectual level. The underwater photography is stunning and gorgeous to watch, as would many high-gloss nature documentaries covering the same environment. Watching the octopus hunt, hide from predators, camouflage, contort itself, and even seemingly walk on its tentacles is fun to watch, and nature has plenty of weird specimens to discover and analyze. I’m on board with re-examining the depths of our understanding with some of the weirdest creatures doing their thing thanks to millions of years of evolution. However, where the movie left me wanting is that it is, one hundred percent, one guy talking to the camera and explaining his observations about one nifty octopus and what he has learned from these experiences. The scope of the movie is so minor that it feels less a film and more like a filmed nature article, a little colorful expose that your local news might play to close out its programming. I found the movie to be too slight and unvarying in its information and delivery.

Perhaps I’m a curmudgeon at heart but I kept thinking that Craig Foster was projecting a lot of emotions onto this octopus. I believe this creature meant something special to him, and he became familiar enough that the octopus saw him less as a threat and more as a… what? Does this octopus really see this man in a snorkel as a friend or an ally? She reaches out a tentacle to touch the appendage of this underwater man, but what does that mean? Is this signaling a friendship or is it merely signaling an animal taking stock of its surroundings? I don’t know and depending upon your personal relationship with the animal world, you will either accept everything Craig says at face value without skepticism or you will see him as a slightly foolish romantic. 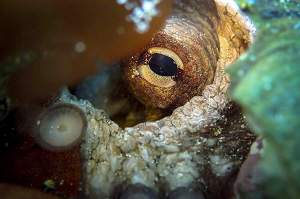 The movie’s gentle and empathetic nature is unbroken, though I’d be lying if I didn’t say I thought about the extremes of where this man/octopus relationship could lead. I wondered if Craig was going to declare that he and this octopus were getting married, he was leaving his wife, and that no one could compare to the touch of her tentacles. I don’t mean to sound cruel or dismissive about this man’s emotional experiences. This shared bond clearly touched this man and allowed him to realign his relationship with nature. He even says he feels like a better man and father thanks to these experiences. I’m happy that Craig found that kind of epiphany and direction in his life, and his story has fun details that made me agree that octopuses can be strangely fascinating creatures. However, that doesn’t mean I needed an 85-minute documentary about the guy more or less debriefing to the camera about his year of journaling. It’s just not that grabbing of a subject to satisfy a feature-length documentary. I don’t feel like I gained anything monumentally more from this movie being 85 minutes than I did if it was 25 minutes.

I may watch My Octopus Teacher again and give it another chance (for those wanting to know, it’s since concluded as I compose this review). It beat out serious competition in a year that had some seriously excellent documentaries (Collective and Dick Johnson is Dead both made my Top Ten of 2020). I’m happy so many people seem to be moved by this man’s personal tale of his magical bond with an eight-armed buddy. I was left mostly indifferent. The photography and plenty of the exclusive video captured is interesting to watch, but there’s little separating My Octopus Teacher from a viral clip you’d see forwarded to you from an animal blog. You can find plenty worse movies out there but I guess what makes this movie so special is just lost on me.