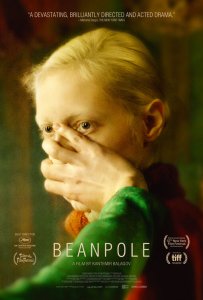 Deeply depressing but empathetic to a fault, Beanpole might just be the most artistically uncomfortable movie of the year. It’s a Russian film set in Leningrad one year after World War II and the consequences of that awful conflict. Iya (Viktoria Miroshnichenko), our “beanpole,” fought in the war until her PTSD got too bad; she literally freezes in place like a statue when triggered. She’s working in a hospital and looking after her best friend’s child when tragedy strikes. That friend, Masha (Vasilisa Perelygina), desperately wants another child but cannot get pregnant. She pressures Iya to become her surrogate womb, and Iya feels so guilty that she agrees. From there, Beanpole chronicles the pain of not just these women but a pall that hangs over the nation, as people try to return to a normal that begs questioning whether it ever existed. It’s about hurt people lashing out and hurting others, some intentional and some unintentional. A coerced sex scene (a.k.a. rape) between Iya, a blackmailed but kindly middle-aged doctor, and Masha is immediately troublesome and yet thanks to the careful consideration of co-writer/director Kantemir Balagov, you can understand the motivation that lead each to being there. Masha is setup as the villain of the second half, knowingly guilting and pressuring Iya, taking away her agency, bullying her, and then there’s an extended scene toward the end where Masha meets the wealthy parents of her fledgling boyfriend. She reveals the lengths she would go to survive life during wartime as a woman soldier in a predominantly male encampment. It might not be enough to reverse your stance on her as a person but it definitely complicates your understanding. The whole movie is about people doing what they need to in an unjust world to survive. Beanpole opens up into a larger mosaic of condemnation about how women are treated by society, and each member of this tale is a victim in their own way, with their own story and own past and own demons, even the cruel ones. Beanpole has a gorgeous use of color, a deliberative sense of pacing, and outstanding acting that feels completely natural. It’s also, as mentioned, super depressing and hard for me to fathom many that will be eager to be this uncomfortable. For those courageous enough, you might find a beauty in the dignity of these women navigating post-war trauma and resilience.