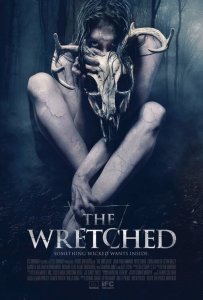 Very reminiscent of Fright Night, this movie feels like a lost relic to 80s coming-of-age movies and horror-next-door thrillers, and it’s generally great. We follow a teenager who is staying with his father over the summer; he’s also recovering after a drug-related accident. He’s convinced that his neighbor is really a witch who kills children and then fiendishly erases the memory of those children from the families she has inserted herself into. Nobody will believe him, especially with his past drug abuse, so he takes it upon himself to investigate the strange goings on, Rear Window-style, and potentially save lives once the witch is forced to jump into a new host and terrorize a new family. The Wretched is barely 90 minutes long and is splendidly plotted with every scene being meaningful, advancing the plot, shading characters and conflicts, heightening the stakes and suspense. The new-kid-in-town and young crush story elements work as well as the creepy horror. Overall, it’s a very fun movie that can switch modes when needed, being funny or sincere or spooky, and it does each with great finesse and execution. Writer-directors Brett and Drew Pierce (Deadheads) have a great affection for their characters as well as their material. It shows in the level of thought they give even small details, finding clever ways to serve payoffs as well as work emotional investment into a briskly told tale. There’s a very late twist that I should have seen coming but made me want to start clapping, and it works entirely within the carefully set-up rules of the supernatural monster and supplies an organic elevation to the stakes. I only wish the movie had given me even more. The Wretched is a charming throwback and proof positive that you don’t need to reinvent the wheel to make a good horror movie, just keep to a vision and see through the story to best serve and elevate that vision. It’s well worth your 90 minutes and I predict a bright future for the Pierce brothers.