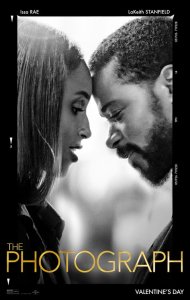 The Photograph is a romantic drama that is unfortunately tethered to three very uninteresting lead characters. They all have potential; a journalist (Lakeith Stanfield) getting closer to a story than he anticipated, a woman (Issa Rae) learning more about her artistic, ambitious, and self-involved mother (Chante Adams) after her death. The problem is that these characters all feel trapped in boxes, confined, and the personal growth onscreen is minimal. Sure, we still get the boy-meets-girl and boy-loses-girl paces expected but there’s precious little depth given to these people. It feels like writer/director Stella Meghie (Everything Everything) should be mining more insights and revelations from this mother/daughter re-examination, but by the end we haven’t learned anything we didn’t already know in the first thirty minutes. It’s a strange experience because even as things are, on paper, moving forward, the movie feels stagnant. This is also a byproduct of the nascent chemistry between Stanfield and Rae, two genial, good-looking people that just don’t have that spark or urgency when they’re comfortably close. It’s a movie that seems to stay in the same languid gear throughout the movie, even as the couple is progressively getting closer. It’s a competently made movie with good actors but my mind kept wandering and wondering what a full movie following the mother chasing her dreams might resemble, or a full movie following Lil Rel Howery (Get Out) and his adorable family, the character who entertained me the most. The story elements are here for an engaging and potent romantic drama but the mix feels undercooked and stale.