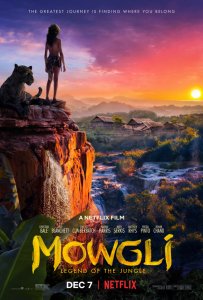 Sometimes second place might as well be last place in the film industry. Pity Andy Serkis and the years he spent making a live-action, mo-cap enhanced version of The Jungle Book only for Disney to scoop him years in advance and deliver a billion-dollar hit. It’s impossible not to compare the two and unfortunately Serkis’ passion project is found wanting in many areas. For starters, there’s far less Shere Khan (voiced by Benedict Cumberbatch), which is a shame. He’s really only in the film for very little. I think Cate Blanchett is miscast as the voice of the snake, Kaa, who acts like a grand keeper of the jungle’s history and future. I’m not sold on Serkis as Baloo, a grumpy paternal figure present from the beginning that trains the wolf pups so they can join the pack. The middle half-hour Mowgli spends in the company of man with a kindly poacher also feels like the movie is spinning its wheels. It keeps the rest of the jungle on hold. There are some rather dark asides that can be quite surprising, from wolf pups plummeting to their doom, bloody scars, cute severed heads to haunt your dreams, and three separate occasions where characters will watch the light vanish from a dying animal’s eye. It’s definitely a more brutish, cruel, and dangerous world, but at what greater expense? The characterization doesn’t add up to much. The character relationships are minimal. The CGI creatures and settings look unfinished. The whole enterprise feels rushed even though it’s been on the shelf for some time, which may be why the studio was eager to sell it to Netflix for a cool $90 million. You’ll watch Mowgli and nod, generally entertained, but questioning whether it’s 90-million worth.