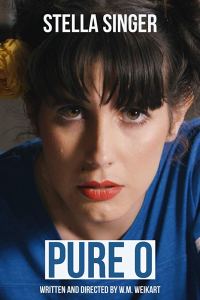 Ideally, every scene in a feature film should have a purpose, whether it’s pushing the overall story forward, informing us about characters and their interior lives, setting up plot points or jokes, or establishing the atmosphere and way of life examined on screen. This is even more necessary with shorts simply from the truncated run time. I was asked to review the short film Pure O, produced by several hard-working, creative types in the Ohio film community. Confession: I know several of the people in front of and behind the camera with this project. I will hold as much of my personal bias back and judge the film on its artistic merits but I thought that should be mentioned upfront.

Pure O follows Purity Oglander (Stella Singer), the lead singer and guitarist for a grunge band on the verge. She also suffers from a mental condition called Pure OCD (sounds almost like a misguided Calvin Klein cologne), which is an intrusion of harmful thoughts and visions. These thoughts don’t necessarily translate into action but the worry for the recipient is that they might. Purity must navigate her mental illness, the stigma attached to mental illness circa the 90s, and work up the courage to get the help she needs. 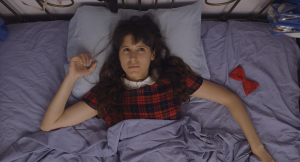 It feels like the narrative terrain Pure O mines is our protagonist’s question over who she really is and if she’s ready to embrace change. She’s a local musician who we’re told, via long successions of handy answering machine voice over exposition, has a band “O” on the cusp of its big break. Even titles appear onscreen to tell us this is her “last day of obscurity.” This is a prime conflict as it can push a character outside of their comfort zone and transition from an old life into an uncertain new one. The problem is that this is kept much more as a backdrop of potential conflict; it’s background seasoning. I’m also curious how different her band’s big break is going to be if they’re playing on low-rent, Wayne’s World-style public access television talk shows (“The Mr. Dick Show”). The fact that she blows off this rinky-dink performance and her label is ready to drop the band makes me think that they might not have been so close to that last day of obscurity after all. It’s also not like Purity is returning to her old stomping grounds and reflecting on its influence before she’s whisked to a new level of fame and fortune. She’s still home and presumably with the same people as before.

The larger intended focus of acceptance is with her mental illness. That’s an interesting starting point for conflict and an opportunity to visualize some pretty alarming imagery. I was confused whether Purity was just now getting these intruding thoughts. It felt like she had to have had these thoughts before, but her reactions to them seemed so sudden and new, the question over what is going on rather than the recognition that these dark impulses have returned. I think the stronger narrative would have been the acknowledgement that she’s already been struggling to live with these thoughts. That doesn’t mean they are normalized but that it’s not some sudden mental break. I don’t know if there’s any rhyme or reason for what triggers these outbreaks, but we’re treated to two instances or her envisioning brutal assaults and murdering innocents. It’s intended to be a shock to the system, and it delivers mostly, but the overall film tone hampers that. 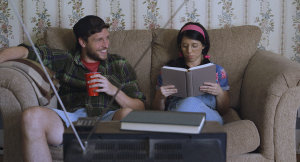 If I had to single out one element that holds Pure O back from its stated intentions of writer/director W.M. Weikart (Insidious Whispers), that would be its mishmash of tones. There are some pretty significant tonal divergences here with the incursion of psychological horror, but really it’s more the depiction of its everyday world as something akin to a wacky network sitcom. The supporting characters add little to the larger story. They seem to be serving as auditions for a crazy roommate sitcom. There’s the Dickish Dude (Dan Nye), the Soft-Spoken Brainiac (Ann Trinh), Oblivious Girl (Lauren Paulis), Annoying Self-Involved Sister (Sara Morse), Concerned But Out-of-Touch Dad (Carl G. Herrick), and then there’s the even smaller supporting characters of Sardonic Goth Waitress (Kira L. Wilson), Pathetic Local Host (Joe Kidd), and Lisa (Iabou Windimere), a roommate who paints varying degrees of the same circle. Does that sound like the kind of cast of characters for an examination on the crippling effects of mental illness? It feels like an overdose of quirk that doesn’t materialize into something greater or related to Purity. The visit with Purity’s friends amounts to reminding her of the stigma of mental illness, but this same point is served in the next scene with the family lunch when her sister makes the same points. If these characters are meant to reflect our heroine’s journey to some road of acceptance, it’s hard to take that evolution seriously because it’s hard to take them seriously. The sentimental conclusion with Purity getting the help she needs, with the support of her immediate family, feels like another example of a clashing tone keeping the film from gelling properly.

The problem for me is that Pure O didn’t quite earn that hopeful, well-traveled ending. The characters were amusing in their brief encounters but didn’t feel like they contributed to the overall larger story. They felt like holdovers from a larger universe of stories making a “special guest appearance.” They felt less like people. That would be fine except I believe we’re meant to feel that sting of hope by the end, that Purity’s family is supporting her accessing therapy. It works, but the ensuing 18 minutes feels cluttered as far as the path taken to get to this conclusion. I think the friends could have been cut entirely especially if the aim is to make Purity feel more like an outcast floating by. It doesn’t feel like all the stops along the way accomplished the goal of moving toward self-acceptance. I’m hard-pressed to really think why she gets the help she needs except for an outpouring of support via answering machine exposition dump. But even those are in response to her near catatonic walk-off from the TV gig, a response that doesn’t seem to earn the outpouring of concern. She does get a phone call from Betty Bosey (Danielle Vettraino), the girl everyone else mocks for being crazy, so perhaps that’s intended as a reminder of self-care. 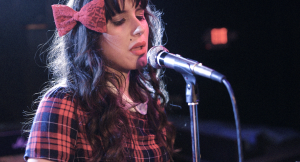 There are many merits to Pure O. The acting is fairly good throughout and Stella Singer (Choices) is an excellent choice as a lead. She has great moments. Her character is very passive for the majority of the short film, either being talked to or keeping the intruding voices/thoughts at bay, which causes her to feel like a passenger too often. Singer has such a striking, expressive face (seriously, she looks so different with her hair up versus down) that I wanted her to have more opportunities to stretch her acting muscles. It may be fresh in my mind, but she reminded me of Lola Kirke (Gemini). This is a professional looking and edited short film. Even the opening concert scene impressed me with how it was able to tie together an effective looking stage experience. The 90s aesthetic feels very gamely committed, none more so than in wardrobe where each character almost feels entirely defined by a color or extreme look. The strict adherence to stylized costuming does a smart job of telling you about the characters in visual ways, already cuing you without wasting precious time. The sound design is excellent, with the collage of negative voices crashing against her brain like the oncoming surf. The line, “It all went to hell after Karen Carpenter pierced her clit,” is a wonderful non-sequitur that took my breath away. The strange humor of a low-budget public access TV talk show was amusingly absurdist, complete with talking pine tree sidekick and break dancing robot. It’s the kind of show that seems destined for a dedicated YouTube life. My favorite genuine moment is the small conversation Purity has with Betty Bossy before she checks into her therapist’s office. It’s slow and develops Betty’s character effectively in small strokes, discussing her life decisions and corrections. It was the moment in Pure O where the characters onscreen felt like living, breathing people and done with a degree of subtlety. The fact that everyone else mocks Betty is just another indication of their general flippancy. 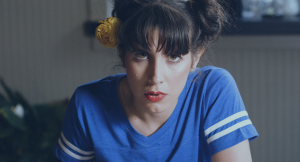 Pure O is a well-intentioned short film with fine attributes, both in technical matters and with its troupe of actors, notably the compelling lead heroine, Stella Singer. The variety of supporting characters will keep you watching since it’s something new every few minutes; however, the glut of characters also detracts from the drive of the story and its aim toward Purity learning to accept her mental illness. The inconsistent tone also poses as a distraction from the narrative goals, making the serious stuff feel less serious and the comic asides feel like they’ve been retrofitted from another project. This marriage of tone could have worked, but this calibration doesn’t quite get there. I do think people can get entertainment from Pure O (after all, the time investment is pretty accessible). It feels like a glimpse of a larger story, one worth developing into a tighter, character-driven plot with less wacky side diversions. Still, congratulations to the many talented people who pooled their efforts and brought a short film into life. Pure O is an intriguing yet flawed start to a character and a world worth further exploration. But if this is all we get, at least there was a break dancing robot to go with my Karen Carpenter pierced clitoris aside.