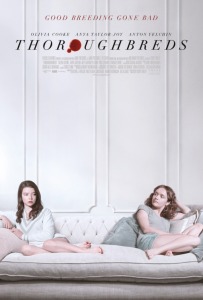 Thoroughbreds is a dishy, tart little treat that kept me squirming, laughing, and gleefully entertained. Olivia Cooke (Me, Earl, and the Dying Girl) and Ana Taylor-Joy (Split) are outstanding as privileged teenagers trying to resuscitate their former friendship through collaborative murder. Cooke plays Amanda, a sociopath who cannot feel anything, who is incurably honest, and has stopped caring what others think. Taylor-Joy plays Lily, a self-involved young lady that feels overwhelmed by life and is skilled at dissembling. Together, the girls scheme to kill Lily’s boorish stepfather and enlist the aid of a hapless small-time dealer with big plans (Anton Yelchin, in his final performance) through blackmail. The story from writer/director Cory Finley is immediately engaging with how it naturally reveals the complicated histories between Amanda and Lily as well as what makes each questionable. These are two very interesting people and just watching their probing push-and-pull was entertaining enough, especially with such strong performances. The characterization of a sociopath without a heavy moral condemnation was refreshing. We assume Amanda will be the bad influence but it really becomes the other way around, with Lily faking for her own purposes. Thoroughbreds is more dread-filled and unsettling than conventional thriller, and while there are some gallows humor to be had from the abnormal characters, this is less a dark comedy. There are drawn out tracking shots and methodical push-in camera movements meant to build audience anticipation, and they’re mostly effective. The first half is a bit more engaging than what it ultimately delivers as a climax. It’s still satisfying and well handled, but Finley throws in some misdirects that don’t add a rising sense of stakes. The stakes are really more personal, which works since the crux is on the relationship between the girls and whether they are being honest or manipulative with one another. By the end, I thought I could argue either way who was manipulative and when. Small irony: the last scene you see of Yelchin is him as a valet parking other people’s cars.