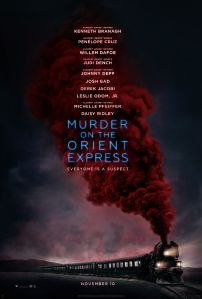 Take my opinion with all the caution you need when I say this: I’m not a fan of Agatha Christie mysteries. Sacrilege, I know, but I just don’t find enjoyment from a mystery that is too convoluted, oblique, dense, and purposely unable to be solved until the clever detective explains everything. That’s not a mystery that engages an audience; it’s a problem that is followed by an intermediate period of downtime. Murder on the Orient Express is a remake of the 1974 Oscar-winning film, this time with Kenneth Branagh directing and starring as Christie’s brilliant Belgian sleuth Hercule Poirot. The original film’s appeal wasn’t the story (see above) but in spending time with the colorful suspects played by many older actors decades removed from their Hollywood peak. It was scenery chewing of a first order. The 2017 Orient Express has some slick production design and requisite big name actors but that’s about it. There are a few alterations here and there but the big moments are the same as is the ending, which means it’s another mystery primarily of obfuscation. I just don’t find these fun to watch. I wasn’t bored but I wasn’t really involved. It failed to provide ways for me to connect, to put the clues and pieces together, and confused volume with development. The new actors feel wasted, especially Judi Dench. I was most fascinated by Branagh’s extensive mustache that seems to have grown its own mustache. If you’re a fan of Poirot, Christie, or the original film, there will probably be enough in this new edition to at least tide you over. I wasn’t too sad to get off this train by the end.