Wes Anderson is a filmmaker whose very name is a brand itself. There are a small number of filmmakers who have an audience that will pay to see their next film regardless of whatever the hell it may be about. Steven Spielberg is the world’s most successful director but just having his name attached to a movie, is that enough to make you seek it out and assume quality? If so, I imagine there were more than a few disappointed with War Horse and Kingdom of the Crystal Skull. But Wes Anderson has gotten to that height of audience loyalty after only seven movies, mostly because there are expectations of what an Anderson film will deliver. And deliver is what the quirky, fast-paced, darkly comic, and overall delightful Grand Budapest Hotel does.

In the far-off country of Zubrowka, there lays the famous hotel known the world over, the Grand Budapest. The head of the hotel, the concierge, is Gustave (Ralph Fiennes), a highly mannered Renaissance man who caters to the every whim of his cliental. Zero (Tony Revolori), an orphaned refugee, is Mr. Gustave’s apprentice, a lobby boy in training learning from the master in the ways of hospitality. Gustave likes to leave people satisfied, including the wealthy dowagers that come from far just for him (Gustave: “She was dynamite in the sack,” Zero: “She was… 84,” Gustave: “I’ve had older.”). One of these very old, very rich ladies is found murdered and in her rewritten will, the old bitty had left a priceless portrait to Gustave. Her scheming family, lead by a combustible Adrien Brody, plots to regain the painting, which Gustave and Zero have absconded with. 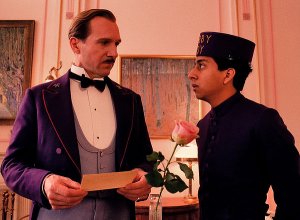 For Wes Anderson fans, they’ll be in heaven. I recently climbed back aboard the bandwagon after the charming and accessible Moonrise Kingdom, and Grand Budapest is an excellent use of the man’s many idiosyncratic skills. The dollhouse meticulous art design is present, as well as the supercharged sense of cock-eyed whimsy, but it’s a rush for Anderson to pair a story that fits snuggly with his sensibilities. The movie is a series of elaborate chases, all coordinated with the flair of a great caper, and the result is a movie over pouring with entertainment. Just when you think you have the film nailed down, Anderson introduces another conflict, another element, another spinning plate to his narrative trickery, and the whimsy and the stakes get taken up another notch. The point of contention I have with the Anderson films I dislike (Life Aquatic, Darjeeling Limited) is the superficial nature of the films. As I said in my review for Darjeeling, Anderson was coming across like a man “more interested in showing off his highly elaborate production design than crafting interesting things for his characters to do inside those complex sets.” With this film, he hones his central character relationships down to Gustave and Zero, and he can’t stop giving them things to do. Thankfully, those things have merit, they impact the story rather than serving as curlicue diversions. We get an art heist, a prison break, a ski chase, a murderous Willem Dafoe leaving behind a trail of bodies, not to mention several other perilous escapes. This is a film packed with fast-paced plot, with interesting actions for his actors, maybe even too packed, opening with three relatively unnecessary frame stories, jumping from modern-day, to the 1980s, back to the 1960s, and finally settling into the 1930s in our fictional Eastern European country.

The other issue with Anderson’s past films, when they have underachieved, is that the flights of whimsy come into conflict with the reality of the characters. That is not to say you cannot have a mix of pathos and the fantastical, but it needs to be a healthy combination, one where the reality of the creation goes undisturbed. With Grand Budapest, Anderson has concocted his best character since Rushmore’s Max Fisher. Gustave is another overachieving, highly literate, forward-driving charmer that casually collects admirers into his orbit, but he’s also a man putting on a performance for others. As the head of the Grand Budapest, he must keep the illusion of refinement, the erudite and all-knowing face of the luxurious respite for the many moneyed guests. He has to conceal all the sweat and labor to fulfill this image, and so he is a character with two faces. His officiously courtly manner of speaking can be quite comical, but it’s also an insightful indication that he is a man of the Old World, a nostalgic European realm of class and civilization on the way out with looming war and brutality. And as played by the effortlessly charming Fiennes (Skyfall), Gustave is a scoundrel that the audience roots for, sympathizes with, scolds, but secretly desire his approval, much like Zero. It is a magnificent performance that stands as one of the best in any Anderson film. 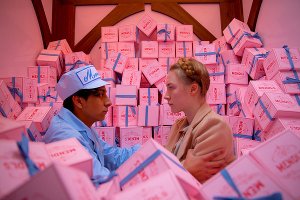 The fun of a Wes Anderson movie is the zany surprises played with deadpan sincerity, and there is plenty in Grand Budapest to produce smiles and laughter. It’s hard to describe exactly which jokes land the best in a Wes Anderson film because they form a patchwork that elevates the entire movie, building an odd world where oddballs can fit right in. It was under a minute before I laughed, and I smiled through just about every remaining minute of the film. I enjoyed a joke involving a dead cat that just kept being carried from scene to scene. I enjoyed a sexually graphic painting that just happened to be lying around. I enjoyed the fact that Zero draws on a mustache every morning to better fit in with the men of his day. But mostly I just enjoyed the characters interacting with one another, especially Gustave and Zero, which forms into the emotional core of the film. It begins as a zany chase film and matures as it continues, tugging at your feelings with the father/son relationship (there’s also a subtly sweet romance for Zero and a pastry girl played by Saoirse Ronan). One of the big surprises is the splash of dark violence that grounds the whimsy, reminding you of the reality of death as war and fascism creep on the periphery. In fact, the movie is rather matter-of-fact about human capacity for cruelty, so much so that significant characters will be bumped off (mostly off screen) in a style that might seem disarming and unsatisfying. It’s the mixture of the melancholy and the whimsy that transforms Grand Budapest into a macabre fairy tale of grand proportions.

The only warning I have is that many of the star-studded cast members have very brief time on screen. It’s certainly Fiennes and Revolori’s show, but familiar names like Bill Murray, Tilda Swinton, Tom Wilkinson, Jeff Goldblum, Lea Seydoux, Jude Law, Harvey Keitel, Jason Schwartzman, Owen Wilson, F. Murray Abraham, and Bob Balaban are in the film for perhaps two scenes apiece, no more than three minutes of screen time apiece. Norton, Brody, and Dafoe have the most screen time of the supporting cast. Though how does Revolori age into the very non-ethnic Abraham? It reminded me of Street Fighter: The Legend of Chun-Li (here me out) where, as she ages, Chun-Li becomes less and less Chinese in her facial appearance. Anyway, the brevity of cast screen time is not detrimental to the enjoyment of the film, considering all the plot elements being juggled, but I would have liked even more with the dispirit array of fun characters.

The Grand Budapest Hotel is Wes Anderson at his best, pared down into a quirky crime caper anchored by a hilariously verbose scoundrel and his protégé. Naturally, the technical merits of the film are outstanding, from the intricate art direction and set dressing, to the period appropriate costumes, to the camerawork by longtime cinematographer Robert Yeoman. The movie is a visually lavish and handcrafted biosphere, a living dollhouse whose central setting ends up becoming a character itself. The trademark fanciful artifice is alive and well but this time populated with interesting characters, a sense of agency, and an accessible emotional core. The faults in Anderson’s lesser films have been fine-tuned and fixed here, and the high-speed plotting and crazy characters that continually collide left me amused and excited. If you’re looking for a pair of films to introduce neophytes into the magical world of Wes Anderson, you may want to consider Grand Budapest with Moonrise Kingdom (Royal Tenenbaums if they need bigger names). In the end, I think Anderson more than identifies with his main character, Gustave, a man enchanted in a world of his own creation, a world better than the real one. Who needs the real world when you’ve got The Grand Budapest Hotel?