In the Eternal City, a.k.a. Rome, Jep Gambardella (Toni Servillo) has served as its unofficial emcee for years. The literary magazine writer has been coasting for years, living off the prestige and fame from an international hit novel he wrote in his twenties. Now at the age of 65, Jep has come to the conclusion that his life has been lacking the beauty he has sought. All the parties, the late nights, and the fast living have caught up with him. Jep explores the city and its peculiar inhabitants to examine his own life.

It’s impossible to watch The Great Beauty without conjuring images of the great director Fellini. It certainly brings to mind a modern La Dolce Vita. There’s a heightened sense of reality mingling with the surreal, the lives of the rich socialites stepping into the reaches of irony-free satire. At a small party, one rich lady compliments the jazz playing, and another lady says, “The only jazz scene worth listening to today is Ethiopian jazz.” I burst out laughing harder than I have all year. These are people living privileged lives that have lost their tenuous grasp on reality, unaware that they have become caricatures. Their silly ennui has consumed their perspectives. Like Fellini, the movie explores a cloistered world of the Roman elite and their tragicomic absurdities with a touch of the surreal and meditative. I can’t so much pinpoint a clear plot or structure that guides the film, but there are numerous moments, images, scenes that standout in my memory. A private Botox party is played as a zany spiritual gathering where applicants take waiting numbers and a doctor whisper about the great journey they are on together, and then injects botulism into your face. Nuns are everywhere, which shouldn’t be a surprise, but the sight of nuns just randomly populating scenes lends to the surreal nature. Then there’s the 104-year-old nun positioned to be a saint. She looks like a mummy, prefers to sleep on a floor of cardboard, and her mind is still capable of great insight. The ancient nun manages to thematically sum up the film’s interests in beauty, culture, religion, remembrance, and death. 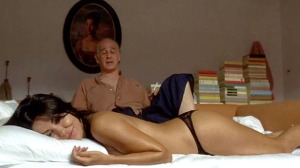 The relaxed nature of the film and the abstract plot, with little sense of linear trajectory, will certainly test the patience of several moviegoers. At my theater, after twenty minutes several middle-aged couples walked out, muttering, “This is one of the worst movies I’ve ever seen.” I don’t know what these people were expecting when they walked into a 140-minute Italian film, but there declaration is flat-out wrong. I mean, these people probably haven’t even seen InAPPropriate Comedy (cheap shot, achieved). The opening involves the death of a Japanese tourist, and then it switches over to a raucous rooftop party that rivals what we saw in last summer’s Great Gatsby. This is a slow movie but it is slow with purpose, if that makes sense. Jep’s life for so long has been about the party scene, the dulling of the senses, the rush of adrenaline and alcohol. After his sixty-fifth birthday, he’s decided he has no more time to chase after momentary thrills. The journey that follows is mostly a collection of anecdotes and ideas, but many of them have strong staying power. The most notable story is a budding romance he forms with Ramona (Sabrina Ferilli), a 40-year-old stripper with no illusions about who she is. Their relationship is sweet and it ends abruptly, far too soon than a viewer would wish. I know if Hollywood ever remade an English version of this film, they’d structure the whole movie around this relationship. I suppose another benefit of a free-floating, stream of consciousness style plot is that few storylines overstay their welcome.

Jep has come to a turning point, a stark realization that his life is empty. A nice reminder of this notion, as well as a haunting “what could have been” review, is when the husband to an old girlfriend seeks him out. She has recently died and inside her diary, she writes passionately about Jep from their romance way back when they were teenagers. She only has a passing remark for her husband of 30-some years, and it rips the poor man apart. She was always hung up on Jep, always thinking about what might have been, the path not taken, and this defined her intimately. For the first time since he was young, Jep is looking at the world with different eyes and a hunger that exceeds Earthly pleasures. His friends all suffer from the doubt that they’ve wasted their time, that they were never good enough, and they accept their defeat and leave Rome one by one. One man, so humbled, doesn’t even want to bring any furniture with him, so he leaves it all behind. The only thing he’s taking with him is the years of regret, apparently. There’s a nice moment when he’s reiterating the story of his first kiss to Ramona, which also involves this now deceased woman. He can’t remember what she said to draw him, and the look of disappointment at his failing memory, at being unable to relive a moment that meant so much to him so long ago, it crushes him. Who knows how long Jep had held onto that memory as a source of respite. Jep is examining his life’s disappointments and misanthropy but it may already be too late.

There are plenty of messages and points of contemplation throughout the film, but the major theme seems to be as simple as, “Stop and smell the roses,” And yet, that doesn’t make the film less engaging and responsive. Jep is asked why he never wrote another book after his great success. There look to be a number of reasons, but he confesses he was waiting to be inspired again by the titular Great Beauty. Naturally, by this point, we and Jep have come to realize that waiting for beauty is foolish when it is all around us at any moment (especially in Rome). Most of Jep’s adult life has been consumed with social frivolities and passing pleasures, but only now does he seem to stop and fully appreciate his surroundings and his company, naturally, when his friends are departing. It’s a universal theme and one that hasn’t gotten old and the film’s handling is anything but sop-headed sentimentalism. It even ties back to the opening, where the Japanese tourist keels over dead. The man is so busy trying to document his vacation rather than experience it, and in the end, it’s all for what?

Like Jep, we too will fall in love with Rome as he strolls around it. Gloriously photographed, it’s a treat to experience the major works of art in Rome, so much so that it may stir your passions to see them in person. Even as the plot becomes lugubrious, you don’t mind because of how lovely Rome and its facilities look. Characters doing little and ruminating in Kansas may get boring, but characters doing little and ruminating in Rome, well at least that’s scenery worth watching.

I’ve read many differing interpretations of the film and its messages, the impact of different scenes and which hit hardest, and it reminds me what good art is meant to do; it’s meant to inspire us, entreat us, but also stir us to engage with it, and The Great Beauty does just that. It’s a bawdy, beautiful, and entertaining film but one that also takes its time, luxuriates in atmosphere, and asks the audience to ponder as Jep does about regret, lost opportunities, and the contradictions of happiness. The surreal touches can provide plenty of laughs, but it’s the smaller appreciation of side characters, ideas, and the contrasts that provide more intellectual payoffs. The film is far more free-floating and meditative than American audiences are used to, but unlike, say the works of Terrence Malick, I felt like I could celebrate the absurdities and joys of life along with the people onscreen. It’s existential without being laboriously pretentious, and the comedy and stylish flourishes help anchor the entertainment.  The Great Beauty is a beguiling movie that admittedly could have been chopped down from its 140-minute running time. If you’re a fan of Fellini, or art history, then this is a must-see. For others, I’d advise giving this a try, though don’t be surprised if it takes a while to grow on you with its ponderous nature.