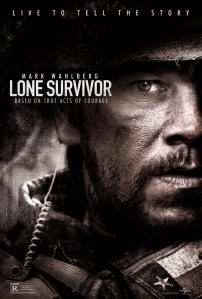 What do you do when the title of a movie is a spoiler? That’s the question with director Peter Berg’s reverential military action film, Lone Survivor. It’s the true story of a team of Navy Seals who had their mission compromised by a pair of unlucky Afghan goat herders. After deciding to set them free, rather than snuff them out, the Seals retreat to an extraction point, with a hundred Taliban fighters hot on their heels. When the action is firing, Berg is right at home, placing the audience in the middle of a visceral firefight that’s bloody and hardcore and pulse pounding. The rocky terrain of the country is just as deadly as the Taliban, as the Seals bounce around like ragdolls. The performances are all grizzled and finely attuned to keeping the terror of the moment at bay. Ben Foster (The Messenger) is the standout, which is a statement that’s been said with most Foster performances. At the end, I’m left wondering what is the film’s greater message. It’s retelling a military episode few people know about, illuminating the courage and bond between soldiers under fire. But in the end, all of these lives were lost because of one moral though arguably bad decision. Couldn’t they have just tied up the goatherds and gotten a better head’s start? Will the movie convince an audience that those innocent Afghan goatherds should have just been collateral damage? Does the movie critique the futility of America’s ongoing presence in Afghanistan? The futility of war itself? I doubt it, especially with Berg’s fervent appreciation of the armed forces putting their lives on the line (the opening credits themselves glorify the toughness of the Seals while also setting up an explanation why they could survive so many gunshots, injuries, etc.). Lone Survivor isn’t the heedless jingoistic propaganda piece that others critics have feared, but in the end it’s simply a sober and respectful tribute to the fallen, and that’s it. For many, this will be enough. For me, I was thrilled by the heroics but looking for more.