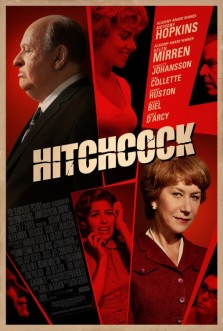 I think Alfred Hitchcock would be amused at his continued notoriety, not just from the quality of his films but also from the magnitude of his own presence. 2012 offers not one but two different movies about the master of suspense, both of which are oddly close in time period. HBO’s The Girl explored Tippi Hedren’s account of what it was like to film The Birds, with Hitchcock being a provocateur. The more straight-forwardly named Hitchcock looks at Alfred’s trials to make one of his seminal films, 1960’s Psycho. I only wish that the movie spent more time on Psycho and less time on the Hitchcock marriage.

Alfred Hitchcock (Anthony Hopkins) is starting to feel like he’s being left behind in Hollywood. He’s looking for his new project, something to rekindle his creative fervor, get those juices flowing once more. Then he comes across the book Psycho, based upon the murders of Ed Gein, a man who thought his dead mother was telling him to kill and make skin suits of his victims (Gein is also the inspiration for The Texas Chainsaw Massacre and Buffalo Bill in Silence of the Lambs; truly the gift that keeps on giving for horror). Murder, cross-dressing, incest. You can understand the hesitation from studio heads to bankroll the picture, even with the great Hitchcock name attached. With the sturdy support of his unflappable wife, Alma (Helen Mirren), Hitchcock puts his own money and clout on the line to see Psycho through. As the pressure mounts, Alfred is worried that his wife is spending a bit too much of her time with a certain screenwriter who wishes to woo her efforts away.

Sir Alfred was a blunt individual so I will follow suit and mince no words – this movie is terrible. How could it possibly be? It has tremendous acting talent and the rich angle of looking at the making of one of Hollywood’s most controversial and famous movies of all time the groundbreaking Psycho. Alas, it’s when the movie takes its many sidesteps away from the behind-the-scenes action of Psycho is where it goes astray. First off, I find the narrative framing around the marriage of the Hitchcocks to be superficial and hamstrung. We’re telling this vastly interesting story and grounding it in a very slight manner, gauging every creative struggle through the prism of whether or not Alfred and Alma will stick together. I assume it’s supposed to provide an emotional entry point for the movie, but I just didn’t care. I didn’t care about the jealous spasms Alfred felt as his wife spent more and more time with a caddish screenwriter, and boy did that storyline get tiresome. I want to know more about Psycho and not this dumb portrayal of martial woes told with such graceless handling. The whole portrayal seems so minute and clumsy and such a poor framing device when the making of Psycho is a juicy enough story. I didn’t need the focus to be on whether the Hitchcock marriage will persevere. Oh, and the resolution for this feels completely pulled from thin air, without any groundwork laid to explain the about-face into compassion in those final minutes.

Then there’s the portrayal of Alfred Hitchcock himself, which is so dubiously shallow when it comes to psychology. Oh, he’s obsessed with blonde leading ladies? Oh he’s a bit of a control freak? Oh he can be overbearing and demanding and standoffish? Wow, what powerful insights into arguably the most famous director in movie history. The movie, adapted by John J. McLaughlin (Black Swan), feels like it was made by someone who did the bare minimum of research on the man. There are no new insights or even mildly interesting ones to be found. It’s the standard boilerplate repeated with different actors. And then there are the nails-on-a-chalkboard scenes where Hitchcock imagines himself talking confessionally to none other than Ed Gein (Michael Wincott). Excuse me? Oh my goodness do these tacky sequences just grate. I don’t even understand their inclusion. Is this a manifestation of Hitchcock’s own sense of madness when it comes to moviemaking? Does he feel some connection to the horrible disturbed man who inspired his newest film? Does Hitchcock only feel like he can communicate to a figment of his own imagination? Whatever the reason, I wanted to smack myself in the head every time Hitch and Gein had a heart-to-heart. I should have known I’d be in for a bumpy ride when, in the movie’s opening minutes, a news reporter asks Hitchcock, after the premier of 1959’s North by Northwest, why he doesn’t just hang it up? Did this idiot even see North by Northwest? Would you ask Spielberg if he should retire after viewing Saving Private Ryan or Kubrick after A Clockwork Orange?

Then there’s the matter of Hopkins as Hitchcock. It never feels like the right fit. Turkey jowls aside, the man doesn’t look too similar to Hitchcock nor does he adopt a demeanor that proves convincing. Sure he goes for that highly imitable voice and cadence that Hitch is well remembered for, particularly his openings on his own TV show. You never feel like Hopkins has a real strong bead on the character, and surely the fault lies with the weak characterization relying on the collective knowledge of Hitchcock’s outsized public persona. Likewise, Mirren (The Debt) is fine but gets to play another of her steely strong-willed matriarchs. Mirren won’t let you done when it comes to performance but, given the lack of strong characterization, she goes on autopilot. The best actor in the movie is surprisingly Scarlett Johansson (The Avengers) who has a striking similarity to Janet Leigh, and not just in what you’re thinking. She’s instantly likeable and takes the Hitchcock peculiarities in stride, putting up a strong front but voicing her concerns when appropriate. 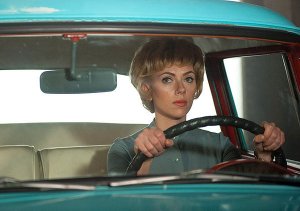 Director Sacha Gervasi (Anvil! The Story of Anvil!) gooses up his story with all sorts of horror genre techniques, including editing fake outs and violent edits. I’m also unsure why so many liberties needed to be taken with the retelling of this story. I’m not going to be a person decrying the use of fictionalized elements in a true-life story for dramatic effect (I loved Argo), but you have to do so in a way that tells a better story without getting too far away from the essential truth of the matter. Hitchcock, in raising the talents of Alma, attributes many of Psycho’s development achievements to her keen womanly insights when they came from others. That’s fine, except that the movie portrays her in such a rarefied state of genius that she quickly becomes the movie’s surefire narrative cheat. Having problem with the last act? Let’s have Alma fix it. Having problems with the editing? Let’s have Alma fix that. It’s not compelling of a story for one character to chiefly have all the answers instinctively and without any sense of struggle. I understand that Alma did a lot of unaccredited work on Hitchcock’s movies, though it wasn’t uncommon for women to be screenwriters at that time and you’d think the pull of being a Mrs. Hitchcock would get her well-deserved credit. Regardless, I wish that Gervasi and McLaughlin had given Alma more depth than being put upon wife/secret savant collaborator.

It’s a shame because there’s a genuinely interesting movie to be had somewhere in here. The making of Psycho was fraught with difficulties and the studios just didn’t get it. Watching Hitchcock work through that process and persevere would be far more interesting. I enjoyed the multitude of famous cameos, like Michael Stuhlbarg as Lew Wasserman, Hitchcock’s agent and eventual head of Universal Studios, and even Ralph Macchio as Psycho screenwriter Joseph Stefano. I suppose the ins and outs concerning one of the most famous movies of all time could be considered, erroneously I feel, to be too “inside baseball.” That’s why I think the filmmakers expanded the romantic drama angle and had it consume the majority of the running time. Often the stupid perils of the will-they-or-won’t-they romantic squabbles feel so petty and cheap considering the magnitude of the work going on. Hitchcock feels like a movie that found the least interesting and essential angle to tell the story of the making of Psycho. Diehard movie fans might find some fun to be had with the minutia of Hollywood and Hitchcock’s life, but I cannot fathom how anyone could view this portrayal as effective. It’s not insightful, it’s not challenging, it’s not relevant, and it’s certainly not entertaining. This movie is not deserving of the name it bears.