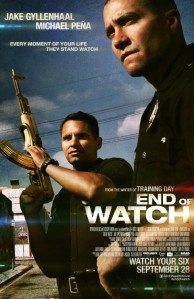 David Ayer has written seven movies and directed three, and almost all of them have followed the Los Angeles police department. The man wrote a character that got Denzel Washington a Best Actor Oscar, and from there it’s been all cops all the time, some dirty, some noble, but all residing in the LAPD. I suppose Ayer knows what he does best and is sticking to his wheelhouse. End of Watch is Ayer’s newest tale featuring one of the protagonists recording his activities on the force to put together for a documentary. And with that flimsy excuse, we have ourselves the first found footage cop drama.

Officers Brian Taylor (Jake Gyllenhaal) and Mike Zavala (Michael Pena) are two young police officers patrolling the mean streets of Los Angeles. Rather than dark and brooding, these guys are often quick with a joke and get along peachy. That doesn’t mean they don’t take their jobs seriously, and we watch them take down suspects, save children from burning buildings, and discover horrible mass slayings by Mexican cartels. During their off duty time, Taylor is dating a spunky woman (Anna Kendrick) whereas Mike has a wife (Natalie Martinez) and children of his own. The guys are honorable cops and run afoul of the local gang leader Big Evil (Maurice Compte), a man with connections to those dangerous cartels.

The best reason to watch End of Watch is the ebullient yet natural chemistry between Pena (World Trade Center) and Gyllenhaal (Source Code). These guys really come across like partners that have been through thick and thin. Their interaction is arguably the best part of the movie, watching two guys who defy cop movie stereotypes. First off, neither is naïve or world-weary; they’re idealistic but grounded. Both men get to be complex individuals, each funny, each warm, each flinty when called upon, each dealing with the heavy toll of protecting and serving, each an honorable police officer trying his best. These guys feel like real-life partners and not just Movie Partners, and that is a great testament to Ayer’s script and the performances by Pena and Gyllenhaal. I also appreciated that the guys are presented as co-leads; I would have assumed Gyllenhaal was going to anchor the movie. These guys really love one another and you understand their camaraderie. The actors went on ride alongs for a solid five months before shooting, and that must have been an invaluable tool for an actor because these guys are so natural with one another. They can bicker but it’s mostly playful, and the dialogue feels authentic and crisp. The performances are measured and meaty and we emotionally invest in these characters and fear for their welfare. These guys are great together and so you worry that we may not see them both live by the end credits.

These guys are such pals, you’ll start to ask yourself, “Hey, shouldn’t there be like some conflict some time?” For almost tow full acts, we are immersed in police procedure details, routines, mundane realities, with the occasional burst of action. Except it takes until the very end of Act Two before there’s a real conflict, one that lasts beyond an individual sequence. These guys are so chummy, so lovingly buddy-buddy, so there’s no tangible conflict between the two of them. The LAPD seems mostly supportive despite some paranoid warnings that do not bear fruit. Even the local thug, Big Evil, doesn’t prove to be an active threat until the Mexican cartel pays him to kill our lead cops (the cartel also wants an expense report of the hit). But this threat doesn’t emerge until well into the film, so much so that the plot feels rather aimless, like we’re on one eternal ride along with our boys in blue. It’s a good thing I enjoy their company.

Here’s why I speculate why Ayer chose to tell his story through the guise of found footage. I don’t out rightly see it as a cash grab, Ayer’s attempt to repackage something old with something new (that is quickly becoming something old). Ayer is not particularly dogmatic about the found footage approach; often we’ll get first-person angles, gun POV angles, or just general angles that could not have been captured through the found footage mechanics. I think Ayer chose this route because he felt it afforded him greater latitude to craft a realistic depiction of the daily grind of the embattled LAPD officer. This approach allows Ayer more freedom to flout cop movie clichés we’ve become well accustomed to. There are no wildly mismatched partners, no long gun heroics, and no long-suffering personal relationships. Though I find it extremely unbelievable that the LAPD would be so casual and blasé about an officer recording his activities and internal workings. That seems like an open invitation for a lawsuit or a subpoena especially if a criminal attorney gets wind. To a degree, the found footage edict works and the authenticity of End of Watch is never in question, but it also seems like Ayer’s convenient go-to excuse when you’re looking for that missing conflict. It is a fictional movie after all. 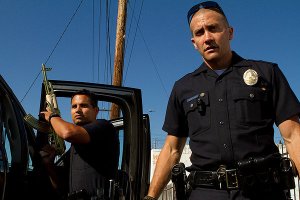 The visceral nature of the camerawork, and the extra emotional attachment we feel for the leads, makes for some pretty nail-biting suspense, though only after the cartel issues their hit. The movie teases you with a gutsy ending, one that exemplifies the men’s sense of brotherhood in arms and the fatalistic prospect of protecting the City of Angels. It felt fitting and poignant. I was surprised that Ayer was taking an audience in this direction… and then he didn’t. The film chickens out and gives us a miraculous plot turn that also reinforces the Hollywood pecking order of racial significance. It’s a misstep and one that costs End of Watch from being more emotionally resonant.

As a side note, I’m not a prude when it comes to the use of salty language. Films that reflect certain realities should not curtail the way people genuinely speak. Some people just have filthy mouths. However, the profanity level in End of Watch is off the chart, notably concerning the character of Big Evil. I am dead certain that every second or third word out of this guy’s mouth is some variation of the f-word. If you catalogued all of his dialogue, I bet over 75% of total words would be profanity. It starts to get ridiculous and even funny when you hear nothing but the same three words during an angry outburst. And this is no David Mamet or Kevin Smith poetic composition of vulgarity and the profane; this is just lazy dialogue, like Ayer told his actor that, when in doubt, let loose a litany of f-bombs. Perhaps Big Evil would be less evil if people just helped him with his limited vocabulary.

End of Watch is an involving police procedural with some gripping moments of tension thanks to the stellar performances from its pair of police officers, Pena and Gyllenhaal. Ayer’s found footage motif gets some visceral excitement out of an old story, but what really sucks us in are the emotional bonds we’ve forged with these two men over the course of an hour. That makes the danger feel very dire. The movie feels like a bromance at times. I wish Ayer hadn’t pulled back from his more dour ending but it’s not enough to spoil what is an above average genre film with a spiffy new visual polish. I don’t know how many films Ayer can keep cranking out about the LAPD but as long as he pays due attention to character, and gives us the occasional break from the ubiquitous antihero with a badge, then at least he’ll keep making compelling genre cinema.