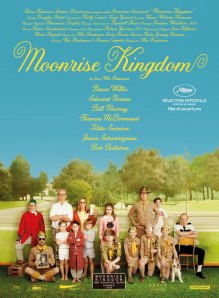 It feels good to be a Wes Anderson fan once again. The indie auteur has a very distinctive style that he seems to have little regard in altering. I’ve been critical of Anderson’s idiosyncratic style, comparing it to crafting wonderfully composed, intricate dollhouses minus compelling or relatable characters to inhabit these artfully constructed mini-worlds. Without that necessary element, it’s all just fancy window dressing. Finally, Anderson, with Moonrise Kingdom, has concocted another movie where the characters grab more of your attention than the backgrounds.

Set in 1965 on a small island just off the New England coast, the movie follows the adventures of Sam (Jared Gilman) and Suzy (Kara Hayward), both twelve years old. Sam has run away from his summer camp, the Khaki Scouts, led by Scout Master Ward (Ed Norton). Suzy has run away from her parents (Bill Murray, Frances McDormand). The small island’s one police officer, Captain Sharp (Bruce Willis), enlists the help of several Khaki Scouts he deputizes to find the missing duo. It’s revealed through a serried of letters, and flashbacks, that Sam and Suzy have been plotting their escape for over a year. They’re in love, and they’re going to make sure nobody interferes.

What more relatable than young love? Sam and Suzy just want to be together and the rest of the adult world seems intent on keeping them apart. Right away you’re pulling for these kids, rooting for their triumph, and the movie does a fantastic job of replicating the innocence of young love without overly romanticizing a very nervous, awkward time in life. When Sam and Suzy practice kissing, for what is obviously the first time, I defy anyone sitting in the audience not to feel a recognizable pang of insecurity. The experimentation is a tad more realistic than you might expect with the PG-13 rating but still nothing to shatter the youthful innocence of the picture. There is not a tawdry moment in Moonrise Kingdom. It’s a time in life when the knowledge of sex existed without a keen understanding of sensuality, like in Miranda July’s Me, and You, and Everyone We Know. It’s more like fumbling around with what you think is appropriate activity. Still, the fact that the movie features twelve-year-olds in their underwear dancing and mildly experimenting means Moonrise Kingdom might draw a swath of ticket-buyers for the wrong reasons (beware the patron in a raincoat).

The scrupulous attention to detail is the same obsessive quality you come to expect from a Wes Anderson movie. He builds living worlds and his color schemes and shot arrangements add much texture to this idiosyncratic landscape. Unlike Life Aquatic and Darjeeling Limited, these artistic elements work in harmony rather than conflict; Anderson actually seems to care about the people here. Chances are if you’re not a Wes Anderson fan, Moonrise Kingdom will probably not be the movie to win you over. The whimsical, storybook nature of the film actually accentuates the broader themes; bright-eyed exploration, the magic of possibility with love, and an unyielding hope. The movie feels like one of Suzy’s storied adventures come to life but without compromising the relatable character conflicts. The movie does build a nice head of steam thanks to the pursuit of our runaway romantics. There’s also a palpable sense of danger lurking, as the kids risk life and limb and even experience death, albeit a dog (Suzy: “Was he a good dog?” Sam: “Who’s to say?”). It’s a poignant tale of childhood but it doesn’t feel childish, a family film meant for people probably too young for families.

Moonrise Kingdom walks a fine line between whimsical and overly precious. Less skilled filmmakers haven fallen suit to making insufferably twee film productions consumed by their own indulgent sense of preciousness. Moonrise Kingdom is full of the typical Anderson quirk but it doesn’t overpower the narrative or define the characters in such limited personal scopes. There’s plenty of laughs to be had with the film, most in the wry chuckle variety; I was laughing throughout, finding those staple peculiar touches to be the most amusing, from the Scout Master reading a magazine titled “Indian Corn,” to Bob Balaban’s questionably omniscient narrator, to some improvised natural earrings.

The movie is consistently funny but also far sweeter than I would have imagined given the detached, arch nature of Life Aquatic and The Darjeeling Limited. Again, the kids are precocious and the adults act more like children, but everyone is really hurting and lonely and looking for a means of coping or persevering, with the biggest source of pain being love; the longing, the ache, the uncertainty of when and if it will return. Usually Anderson’s films involve dysfunctional families mending some degree of their brokenness by film’s end and formulating a connection. With Moonrise Kingdom, the plot is on two kids falling in love and their will to endure. I appreciate that Anderson and co-writer Roman Coppola (Darjeeling Limited) do not trivialize or look down upon the relationship between Sam and Suzy (“Oh, it’s just puppy love you silly, naïve, waifs.”). To them it feels like everything. The tender approach to young love opens the film up to a broader audience without compromising the director’s unique vision. I’d hardly say the film approaches overt sentimentality. What’s there feels earned and more reserved than what we might expect from burgeoning romance. When the expressions of affection occur, they have greater weight and make a greater impact charming the audience. 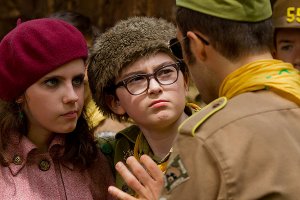 The first-time child actors do a credible job with carrying the film. Hayward and Gilman are charming and easy to like, though I wish Anderson had pushed his young actors a tad harder. They seem stiff at times and a little above-it-all in attitude. I applaud the kids for acting somewhat reserved rather than going crazy with their budding hormones. Both characters are also characterized as “emotionally disturbed,” though this seems like another of the film’s damning details about the out-of-touch adults dictating their lives. I just wished we sensed a greater degree of urgency from them about this whole adventure and the possibility of losing one another. They feel a tad blasé, all things considered.

The bigger celebrity names in the cast assume smaller roles, and many of the supporting characters are thinly sketched with personal conflicts mostly kept at a simmer. These are grownups that, at their heart, don’t know what to do with their feelings. Sam and Suzy feel liberated by their feelings. I found Murray’s blustery sense of anger amusing, and Willis does some subtle work to give you a sense how truly lonely his character is to the core, but it’s Jason Schwartzman (Scott Pilgrim vs. the World) who steals the show in my book as the fast-talking, mercurial, scheming Cousin Ben who seems to have whatever somebody needs. When he agrees to marry Sam and Suzy and acknowledges that their marriage will not be deemed official under any court whatsoever, you get a sense that Moonrise Kingdom has been missing a propulsive and delightful character like Cousin Ben. I wish he had been inserted earlier, but this is Sam and Suzy’s movie, after all.

It’s not on the same level as Rushmore of The Royal Tenenbaums (my favorite Anderson films), but it’s a film that feels a lot more alive and emotionally resonant. It feels like a return to form for Anderson, remembering that the characters and their drama need to be as engaging as the set design. The turbulent young love of Sam and Suzy is sweet and leads to some tender yet poignant moments that warm the heart without making you overdose on cheap sentiment. The idiosyncratic touches are all there, the ironic humor, and the stellar soundtrack selection (Benjamin Britten’s deconstructive orchestral marches stand out as a thematic core), everything you’d expect from a Wes Anderson movie, except this time you’ll find the characters recognizable, their struggle compelling, and the end rewarding. Moonrise Kingdom isn’t the most substantive film playing in theaters but damned if it isn’t the most alluring, amusing, and affectionate, yet all on its own terms. Who would have guessed that a pair of twelve-year-olds would help us show what real love is in 2012?