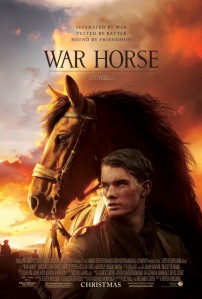 Steven Spielberg and war seem like a dynamite combination. The popular director puts away his childish things and becomes a much more mature, thoughtful artist, with the obvious exception of 1979’s 1941. War Horse is the adaptation of a children’s book-turned-Tony-Award-winning play, where the title star was brought to life on stage via skilled puppeteers. And lo, did people weep for that puppet horse on stage, and lo will they likely weep for the flesh-and-blood version on the big screen. However, I’d hardly call this movie a mature examination on the horrors of World War I. It’s more of a touchy-feely, stodgy, vignette-heavy drama that brings out the worst in Spielberg’s sentimental side.

We’re introduced to our young horse early on, where young Albert (Jeremy Irvine) spies the colt and forms an instant bond. Albert’s father Ted (Peter Mullen) buys the horse on a whim, even though the family could really use a plow horse. Albert names the horse Joey and is determined to prove everybody wrong who doubts the both of them. Together they indeed plow that rocky field and Albert’s family keeps their farm. Then World War I breaks out across Europe and the family ends up losing the horse. Joey is confiscated by the English cavalry and goes on a fantastic journey, switching sides over the course of the war (and allegiances?). Albert enlists in the military so that he can find his long-lost horse. I guess they’ll be no “Dear John” letter when your beloved only has hooves.

War Horse is a throwback to old-fashioned Hollywood epics. It’s like John Ford took control of this movie from beyond the grave (note to self: premise for a supernatural comedy). My theater was filled to the rafters with old people. It was like the nursing home emptied out for the Greatest generation’s couples night. It’s easy to see why the movie would appeal to such an older crowd. It’s a simple story told with its emotions squarely on its sleeve like a badge of honor (mixed metaphors!). It’s so unflappably earnest and sentimental that it can occasionally fall into cornball territory. There’s the greedy landlord who wants to kick the poor family off their farm. Being a Spielberg movie, no expense is spared in milking as many emotions as possible. Spielberg demands tears and you will deliver them, or so help him. It’s all about Joey the horse prancing through people’s lives, touching hearts, bringing enemies together. The movie is primed for mass (older) audience appeal; for God’s sake there is a sassy goose that Spielberg can’t help himself but continue to include. Sassy goose equals money in the bank. This is the only movie I can imagine where plowing is treated as a point of dramatic catharsis. Suffice to say, War Horse is a stodgy war drama that won’t offend anyone with delicate sensibilities.

I wasn’t expecting War Horse to be the equine version of The Red Violin (if you unfamiliar with the masterful 1999 film The Red Violin, go see it immediately instead of watching this flick). We see the horrors of war through a series of vignettes as Joey passes from owner to owner, each befalling some unfortunate fate, though I don’t think the horse is to blame (or is he…?). The vignettes run about 15-20 minutes or so apiece and because the one constant is the horse, that means we have to feature characters talking out loud explaining everything they do and feel. The horse just kind of takes in everyone’s secrets, probably wishing these people would stop their yapping. The characters are drawn rather broad so we get the German brothers who desert their posts, a French girl wanting to learn to ride a horse, and a noble English cavalry marshal, amongst others. It’s hard to get attached to such disposable characters that fail to leave a modest dent. I thought maybe all these characters would converge in the end for an emotional climax, but then I remembered that many of them were dead, so nope. It’s a strange screenwriting shortcoming when the most engaging character for most of the movie is on four legs and never says a word.

It’s hard not to emote when Spielberg lathers on the sentimentality with aplomb. But if you took away John Williams’ earnest score, Spielberg’s sappy staging, and all those close-ups of animals, would you feel anything for this story or these characters; would you feel anything without all the reminders to feel? I doubt it. Don’t count me heartless, for I’ll have you know I bawled like a baby who just watched another baby hit with a shovel at Marley & Me, but does the life of one horse matter so much more than the millions of lives lost at war? We watch all those boys, many not old enough to be called men, run into the unforgiving gauntlet of war, but someone the life of one horse is supposed to outweigh the countless death. I understand a tight narrative focus so that large, unfathomable horrors can feel personable and better felt. Shindler’s List is that kind of movie. War Horse is not. This isn’t even Black Beauty or National Velvet. One of the English soldiers chides the sobbing Albert with a sharp quip: “It’s not a dog, boy, it’s just a horse.” I felt sad when the horse was in danger; I’m not a heartless bastard.

And oh does this horse seem to be Spielberg’s symbol of purity, mankind’s ultimate accomplishment, or, you know, something Big and Important. At one point, Joey gets tangled in a mess of barbed wire and the English and Germans all come to some sort of uneasy truce to work together to free this beautiful animal (if only more hapless horses had gotten lost in No Man’s Land maybe the war would’ve been over sooner – now I sound heartless). The horse is supposed to represent some messianic cost of war, where we destroy nature, turning majestic creatures into weapons of war, etc. I don’t really know what the message/symbolism is striving for but it’s constantly grappling, looking for a suitable sticking point. Honestly, if Joey was supposed to represent purity, goodness, nature, then that filly needed to get turned into glue by film’s end (spoiler alert). I erroneously predicted War Horse to be the “Marley & Me of war pictures.” The horse lives, rejoice America. Never mind the millions of people who died horribly. You can’t have a messianic symbol without martyrdom. If Spielberg wants to drive home the loss of innocence that many underwent thanks to the War to End All Wars (oh, if only), then the horse, a symbol of innocence and nature, needed to die at the machines of war. Otherwise the movie becomes an episodic journey of a single horse, an equine Forrest Gump. I can’t imagine that’s what Spielberg had in mind. I envisioned an M. Night Shyamalan-esque ending wherein the horse does eventually die, get turned into glue, and that glue is sued to construct a bomber plane for World War II. That plane? The Enola Gay. Cut to end credits. War Horse!

This movie has deteriorate in my mind the more I think back, picking away its cornball earnestness and stodgy sensibilities. When the horse is your greatest character then your war drama has some problems. War Horse is not a bad movie by most counts. It looks swell, the emotions are big, and hey horses are pretty aren’t they? But for any discerning moviegoer looking for a strong narrative, incisive commentary on the war, or even moderately appealing characters, well I hope you like looking at horses.