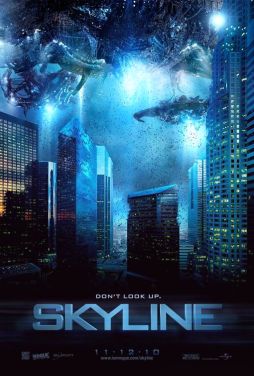 This movie is out-of-this-world terrible. Who wouldn’t want to spend an alien invasion stuck in some L.A. condo with a load of insufferable Los Angelinos? From a storytelling standpoint, watching characters I don’t care about talk about amazing and horrible things happening off camera is not the best use of anyone’s time. Skyline is a movie that keeps surprising you with the depths of its stupidity; just when you think it couldn’t plumb any deeper, the aliens have invaded to eat our brains. Yes, they’re after our brains. So that explains why gigantic monsters will claw away at a building, scrounging for the tiniest morsel of human (that still doesn’t explain it, really). That does not explain why they targeted L.A. if they’re after brains. The special effects are notable for a $10 million dollar movie, but due to the budget restraints, that’s probably why most of this alien invasion is spent indoors and behind trusty sets of Venetian blinds. The pacing is as shoddy as the character work. I kept waiting for these nitwits to step into the light and be vacuumed up into the alien mothership. The end almost looks like it might redeem part of this monstrosity, with our survivors accepting a doomed fate together. But then… I can’t even put into words how shocking, dreadful, and groan-inducing the true ending is for this junk. Suffice to say, it ends with zero resolution, a jagged plot left turn, and setup for a sequel that I’m absolutely positive not one person will be demanding.