Would you believe at no point does the film Water for Elephants come close to explaining its title? I have never read the best-selling 2007 novel, where I’m sure it’s given some glancing explanation; so allow me to thus pontificate. Rosie the elephant is given tubs of whiskey at several points in the movie, which she happily laps up thanks to her prominent proboscis. So does that mean that the “water” for elephants is whiskey? If that’s the case, then this is really a tale of dangerous enabling. But then again, how do you tell a four-ton pachyderm that she’s cut off?

Jacob (Robert Pattinson) is one exam away from becoming a licensed vet from Cornell in 1931 when he’s delivered some tragic news. His Polish immigrant parents died in a car accident. Distraught, Jacob runs away and hops onto a passing train, stumbling upon a crew of circus performers. The train belongs to the Benzini Brothers circus, led by the fiery August (Christoph Waltz). He’s about to be thrown off the train when he panics and screams that he’s a vet. August hires the kid as the team’s newest vet and Jacob finds animals that are in bad shape and pushed to their limits. He recommends a mercy killing for the main attraction, a white horse that the boss’s wife, Marlena (Reese Witherspoon), performs upon. He takes some initiative and puts the horse out, despite August’s wishes. Lucky for them all, they find a new star attraction – Rosie the elephant. Robert doesn’t know the first thing about elephants, or “bulls” as they’re referred to by performers, but he’s tasked with getting the creature ready to perform or else everyone will be destitute. The man has a way with pachyderms, and the Benzini Brothers experience a windfall of new business, looking to take on Ringling Brothers. But the whole time, Jacob is making moon eyes at the boss’s wife, despite everyone telling him at every turn not to.

The biggest issue this movie has is that the trio of main characters all feel like they exist in separate movies. There is zero chemistry between Pattinson and Witherspoon, further dampening their lukewarm romance. Robert is a character defined by being young and having a moral center. He’s not a person so much as an alternative. Marlena is the damsel very distressed, and Witherspoon plays her part all in all slow cock-eyed glances. If I had to pick one of the three, I’d choose to go with August’s version of the story just because he’s a more interesting character than our do-gooding Jacob. August is a huckster who needs to take care of a caravan of drifters and sell them to the public as the stuff of dream and legend. He has some charisma, he’s constantly leveraged against debts, and he is pressured to keep things afloat and to keep people from mutinying. This is beyond the heyday of circuses, so he knows that too many shows with too few people means that his troupe will be picked apart by circus carpetbaggers. You actually start to empathize with him at turns, and then he goes off and beats animals or his wife and that’s that. August is an interesting, vulnerable, flawed character, and he’s given the thankless role of being setup as sneering villain. I would have rather watched August try and keep his deteriorating circus together than watch another tired romantic triangle.

The romance that so much rides on is about as sure-footed as a drunken elephant. Part of this is the failure of Pattinson to deliver a performance that doesn’t feel wooden and artificial, as if he’s posing more than acting. But the romance, which dominates the film’s narrative, is given such scant reasoning that it expects the audience to simply fill in the blanks. He’s a young, good-looking guy who loves animals. She loves animals. Her husband is a jerk, so what’s the problem? Naturally, she’d just run to whatever available catch she could find to escape her hell so anything that delves into more character detail would be a waste of time, right? The movie seems to think so. The love triangle all inhabit very rigidly defined parts. Just because a woman is married to a nasty guy doesn’t mean I instantly want her to get together with just any alternative. Sure this lady deserves to be treated better, but just because a film presents “Option B,” and that option happens to set teenage girls aflutter, doesn’t mean I’m rooting for “Option B” just because it’s not “Option A.” That’s not enough for me to make a satisfying romance, but that’s all Water for Elephants has its aim set on. I need more effort, movie. It’s no surprise that the romantic moments are the weakest parts of the film.

The real star of the movie is Rosie the elephant. She’s a natural performer and she’s got more presence than Witherspoon. I needed more moments with Rosie. After a somewhat boring first act, I started wishing that Rosie would replace someone in this dull love triangle. Imagine how much more interesting this movie would be if it was the heartbreaking story of one man, on woman, and one elephant. Maybe Jacob likes fat-bottomed girls. For animal lovers, there are some wince-inducing sequences of animal cruelty, mostly at the hands of the temperamental August.

The very opening sets the story up for a colossal disaster in the end, and the fact that we are not delivered disaster is a disaster of storytelling (too much?). I’ll try and keep the spoilers in a general sense without going into specifics. The film is bookended by the framing device of Old Jacob (Hal Holbrook) leaving his nursing home to see a circus and tell his life’s story. During his conversation with a circus leader (Paul Schneider), the young man is taken aback when Old Jacob reveals he was apart of the Benzini Brothers troupe when “it” happened. We’re told that it’s like the third biggest circus disaster in history and it has reverberated through decades. I’m set up for something memorable. I’m set up for a tragic ending, likely involving Marlena so that their love will forever have that tinge of unrequited longing. Then when we do eventually head to our big moment in the big top, well it’s far from memorable. Once you assess the ending, you realize that there is very little to make it number three on history’s lists of circus-related mayhem. If this stuff registered as number three, what the hell was number four? A clown catching his hair on fire? And then the movie carries on to some ludicrously happy ending, which seemed tonally inappropriate given the mood of the film and the poorly written romance between Jacob and Marlena. I was prepared for something operatic and terrible, and skimping out on that after an exasperated setup makes me feel hoodwinked, like listening to August bark about the greatest sights and sounds imaginable when they’re all just a trick. Something tells me that screenwriter Richard LaGravenese (Freedom Writers, P.S. I Love You) was not intending to add some meta commentary on how his story is built for dissatisfaction. 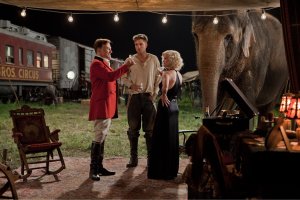 Water for Elephants is a watered-down romance that flounders thanks to three different actors acting like they’re in three different movies. Also, it doesn’t help your romance when so little work is put into making young people fall in love. There are fascinating circus-related tidbits that make me wish the movie was more Depression era circus drama than Depression era circus romance. It’s a handsome enough movie from a technical standpoint, and it has some points of interest and some interesting characters, but its shackled to such a weightless and naïve love story. This movie was described by many as an “old fashioned” kind of film, and generally that can be construed as a warning signal. When people dub something “old fashioned” it can tend to mean “boring except to older people.” It just so happens that my screening of the film was an open caption screening, which attracted dozens of our nation’s elderly and hearing impaired. I didn’t so much mind having grown up with subtitled foreign films. But one delightful accident of seeing this open captioned screening was that they captioned everything. Every sound, every offhand piece of dialogue that would ordinarily go unnoticed and undetected. So now I got to see, as subtitle form, such discoveries as Guy in Background saying, “Hey pick that up,” and Other Guy in Background responding, “Okay. Put it where?” It was more exciting than what was going on between Jacob and Marlena. Now let’s get that elephant drunk!